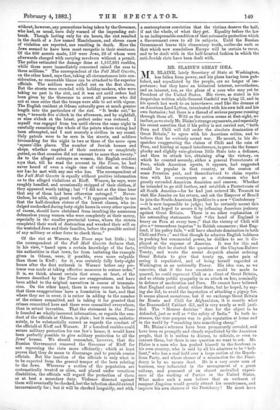 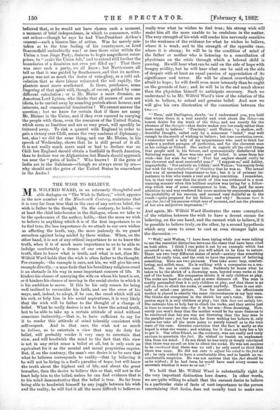 MR. BLAINE, lately Secretary of State at Washington, has fallen from power, and his plans having been pub- lished, and repudiated by the people, are no longer of im- portance; but they have an historical interest, nevertheless, and an interest, too, as the plans of a man who may yet be President of the -United States. His views, as stated in his despatches written while General Garfield was lying ill, and in his speech last week to an interviewer, read like the dreams of an American Lord Lytton, intoxicated with his own talk and his own fantasies ; but there is a thread of serious purpose running through them all. Wild as the notion seems at first-sight, we incline, as we study Mr. Blame's strange arguments, and especially his recent assertion that if his policy is not carried out, "both Peru and Chili will fall under the absolute domination of Great Britain," to agree with his American critics, and to believe that he seriously meant war. He meant, in his de- spatches exaggerating the claims of Chili and the ruin of Peru, and hinting at armed interference, to provoke the former plucky and slightly vain-glorious little State into a defiance, and then to attack her, obtaining aft eA the victory, on which he counted securely, either a general Protectorate of Peru, which American agents, it appears, had suggested would be popular in that country, or the cession of some Peruvian port, and thenceforward to claim reputa- tion with his countrymen as a statesman who had greatly extended American dominion and renown. Whether he intended to go still farther, and establish a Protectorate of all South America—for he had just ordered Mr. Treseott to visit Rio Janeiro on his return, and ask the Emperor of Brazil to join the South-American Republics in a new " Confederacy " —it is now impossible to judge ; but he certainly meant this much, and hoped to secure it by inflaming American jealousy against Great Britain. There is no other explanation of his astounding statements that "the hand of England is heavy on Peru at every turn ;" that the victory of Chili will give a" tremendous impetus" to British commerce ; that Eng- land, if his policy fails, " will have absolute domination in both Chili and Peru ;" and that though he admires English boldness in pushing her commercial power, he dislikes to see it dis- played at the expense of America. It was for this end evidently that he started the question of the Clayton-Bulwer Treaty, and wrote the recent despatch almost ordering Great Britain to give that treaty up, under pain of seeing it repudiated, and of being herself regarded at Washington as an unfriendly Power. His idea was, as we conceive, that if the two countries could be made to quarrel, he could represent Chili as a client of Great Britain, and so obtain public sympathy in an attack on her, nominally in defence of moderation and Peru. He cannot have believed that England cared about either State, but he hoped, by say- ing she did, to avoid the imputation of attacking a pigmy foe. It seems almost monstrous, but if we exchange Great Britaie for Russia and Chili for Afghanistan, it is exactly what the Beaconsfield Cabinet did, and is very nearly as well justi- fied. The "Monroe doctrine" does for the object to be defended, just as well as "the safety of India." In both in- stances, the true purpose was to gain reputation at home and in the world by "smashing into something cheap."

Mr. Blaine's schemes have been prematurely revealed, and

have been so promptly and clearly repudiated by the American people, that it is useless to discuss, to ridicule, or even to censure them, but there is one question we want to ask. Mr. Blaine is a man who has pushed himself to the forefront in his own country, who is said by all his admirers to be "bril- liant," who has a real hold over a large section of the Repub- . lican Party, and whose chance of a nomination for the Presi- dency is by no means dead. He is a very acute man of business, very influential in the management of a great railway, and possessed of an almost unrivalled experi- ence of the working of Parties in the United States. What makes such a man believe that an outburst of rampant Jingoism would greatly attract his countrymen, and improve his own chances of the Presidency I Re must have

believed that, or he would not have chosen such a moment, a moment of brief independence, in which to commence, with- out orders—though he says he had Vice-President Arthur's sonsent—such a bizarre line of action. Was he merely mis- taken as to the true feeling of his countrymen, as Lord Beaconsfield undoubtedly was? or does there exist within the Union a true Jingo Party, desirous to begin magnificent enter- prises, to " make the Union felt," and to extend still further the boundaries of a dominion not even yet filled up ? That there was once such a party, we all know ; but Northerners all tell us that it was guided by Southerners, and that its motive- power was not so much the desire of vain-glory, as a cold cal- culatfon that as slave labour exhausted the soil rapidly, the planters must move southward. Is there, perchance, some lingering of that spirit still, though, of course, guided by some different calculation ; or is Mr. Blaine a mere dreamer, an American Lord Lytton, who thinks that all masses of men are idiots, to be carried away by sounding periods about honour, and interests, and commercial domination ? We cannot answer the question ; but we know for certain that if there are many Mr. Blaines in the Union, and if they ever succeed in carrying the people with them, even the resources of the United States, which seem so limitless and are so very great, will speedily be frittered away. To risk a quarrel with England in order to gain a victory over Chili, seems the very madness of diplomacy ; but, alas! we did the same thing, and our Mr. Blaine, in his speech of Wednesday, shows that he is still proud of it all. It is not really much more mad or bad to declare war on Chili lest England should obtain a foothold in South America, than to declare war on Afghanistan lest Russia should approach too near the "gates of India." Who knows If the gates of India are in the Suleiman—though we always enter by sea— why should not the gates of the United States be somewhere in the Andes ?