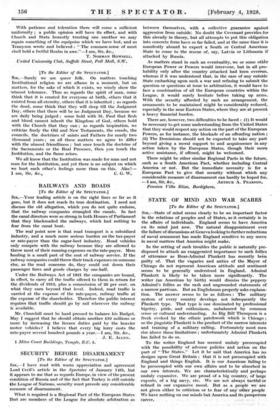 [To the Editor of the SPECTATOR.] have read with warm appreciation and agreement Lord Cecil's article in the Spectator of January 14th, .1:int it appears to me that as regards Europe, in view of the present Condition of Russia and of the fact that Turkey is still, outside the League of Nations, security must precede any considerable measure of disarmainent.

What is required is a Regional Pact of the European States that are members of the League foe absolute. arbitration as

between themselves, with a collective guarantee against aggression from outside: No doubt the Covenant provides_for this already in theory, but all attempts to put this obligation into concrete form have so far failed, and at the same time it is manifestly absurd to expect a South or Central American State to come to the rescue of, say,- Latvia or Lithuania if attacked by Russia.

As matters stand in such an eventuality, we or some othtr European Power or Powers would intervene, but in all pro- bability only after the country attacked had been overrun, whereas if it was understood that, in the case of any outside State embarking upon such a war and refusing to submit the question or questions at issue to arbitration, it would have to face a combination of all the European countries within the League, it would surely hesitate before taking up arms.

With the security afforded by such an arrangement, the armaments to be maintained might be considerably reduced, especially in the near Eastern States, where they are at present a heavy financial burden.

There are, however, two difficulties to be faced : (1) It would be necessary to get some understanding from the United States that they would respect any action on the part of the European Powers, as for instance, the blockade of an offending nation ; (2) The Dominions should not be expected to take any part beyond giving a moral support to and acquiescence in any action taken by the European States, though their more active assistance, if offered, might be welcomed.

There might be other similar Regional Pacts in the future, such as a South American Pact, whether including Central America or not. But the immediate necessity is for a European Pact to give that security without - which any considerable measure of disarmament can hardly be hoped for.