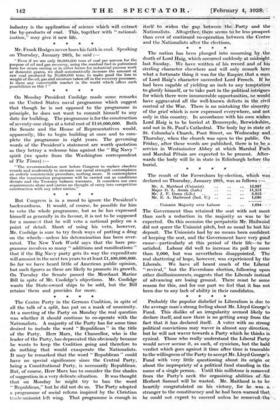 But Congress is in a mood to ignore the President's

backwardness. It would, of course, be possible for him to veto the whole programme, but as he has expressed himself as generally in its favour, it is not to be supposed for a moment that he will veto a national policy on a point of detail. Short of using his veto, however, Mr.. Coolidge is sure to try fresh ways of putting a drag on the wheels—unless his determination has been over- rated. The New York World says that the bare pro- gramme involves so many " additions and ramifications that if the Big Navy party gets its way the expenditure will amount in the next ten years to at least £1,400,000,000. So far we have heard little of American public opinion, but such figures as these are likely to promote its growth. On Tuesday the Senate passed the Merchant Marine Bill in spite of Mr. Coolidge's objections. Mr. Coolidge wants the State-owned ships to be sold, but the Bill retains them and provides for more.