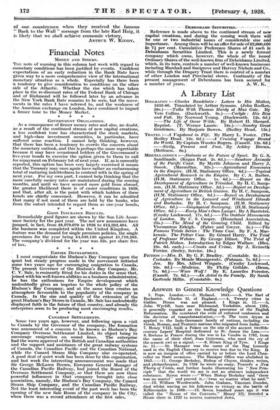 The Earl of Rochester. Charles II. of England.-4. Twenty cities in Galilee. Hiram was not pleased. 1 Kings ix. 12.-5. John Wycliff, born near Richmond, Yorkshire, about 1324, is generally regarded as the leading precursor of the English Reformation. He combated the evils of enforced confession and the doctrine of transubstantiation.--6. The 'term Aryan is applied to the Indo-Germanic family of nations, including the Greek, Roman, and Teutonic nations who migrated from India. 7. Henry VIII. birilt a Palace on the site of the ancient twelfth- century Lepers' Hospital dedicated to St. James the Less.- 8. Bretons in France during the war in La Vendee in 1792, from the name of their chief, Jean Cottereau, who used the cry of the screech owl as a signal. -9. Hiram King of Tyre. 1 Kings ix. 11.-10. Hanaper was the name of the Bag formerly used in the English Chancery to receive fees due to the King. It is now an insignia of office carried by or before the Lord Chan- cellor on State occasions. The Hanaper Office was abolished in 1842.-11. George Berkeley, Bishop of Cloyne, thinker, writer, and philanthropist. In 1709 he wrote an essay, Towards a Neu; Theory of Vision, and further books illustrating his " New Prin- ciple " that the world we see is not an abstract independent substance. Byron wrote :-" When Bishop Berkeley 'said ' there was no matter ' and proved it,-'twas no matter what he said." -12. William Wordsworth. John Graham, Viscount Dundee, died whilst . waving on,. his followers to victory • at the battle of -Killiecrankie in 1689.-,-13. Seven hundred years ago it was called the " Muse of -the Cofiverts." Henry III. founded a Rause there in 1232 to receive 'Converted Jeivs.