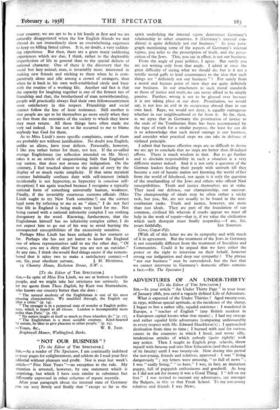 [To the Editor of THE SPECTATOR.] SIR,—As a reader of The Spectator, I am continually indebted to your pages for enlightenment, and seldom do I read your first editorial without pleasure and profit. Nor is your last week's article—" Five Nazi Years "—an exception to the rule. My Attention is arrested, however, by one statement which is nirprising, but which I have seen similar in substance but lifferently expressed in other columns of repute recently.

From the angle of pure- politics, I agree. But surely you are not writing only from that angle. I admit at once the great difficulty of saying what we should do, but is it not a terrific moral gaffe to lend countenance to the idea that such things are "definitely not our business " ? For surely from a moral and human point of view they are quite definitely our business. In our attachment to such moral standards as those of justice and truth, we can never afford to be simply passive. Further, wrong is not to be glossed over because it is not taking place at our door. Prostitution, we would say, is not less an evil in its occurrence abroad than in our own land. Rape, we would not deny, is equally outrageous whether in our neighbourhood or far from it. So far, then, as we agree that in Germany the prostitution of justice to the ends of the Totalitarian State has been accompanied by the rape of truth for a similar purpose, the least we can do is to acknowledge that such moral outrage is our business, and consider what practical steps we can take in defence of violated principle.

I admit that because effective steps are so difficult to devise we are apt to conclude that no steps are better than ill-judged efforts. There is much wisdom in that. But to go further and to disclaim responsibility in such a situation is a very different matter indeed. And it is not only a question of the German leaders feeding their people with untruth till they become a sort of lunatic nation not knowing the world of fact from the world of falsehood, nor again is it only the question of the manhandling of the Jews and others who offend Nazi -susceptibilities. Truth and justice themselves are at stake. They need our defence, our championship, our succour. The championship of ideals may be often rather a sticky task, but you, Sir, are not usually to be found in the non- -combatant ranks. Truth and justice, however, are more than just ideals. They are part of the foundation of our common, civilised life wherein if cracks appear we must all help in the work of repair—that is, if we value the civilisation which such disrepair must finally jeopardise.—I am, Sir, yours faithfully, IAN SIMPSON. Ceres, Cupar-Fsfe.

[With all of this letter we are in sympathy and with much of it in agreement. But the treatment of the Jews in Germany is not essentially different from the treatment of Socialists and Communists. Could it be argued that we have either the power or the right to intervene on their behalf, however strong our indignation and deep our sympathy ? The phrase "not our business" may be surrendered, but the fact that we cannot intervene in Germany's domestic affairs remains a fact.—En. The Spectator.]