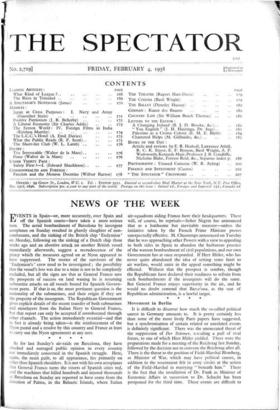 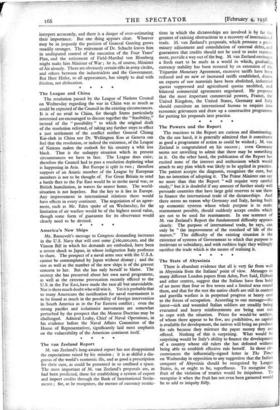 Page 1, 4 February 1938 — It is difficult to discover how much the so-called political
Close

It is difficult to discover how much the so-called political

unrest in Germany amounts to. It is pretty certainly less than some of the more lively Paris papers have suggested, but a synchronisation of certain related or unrelated events is definitely significant. There was the unexecuted threat of the suppression of Der Stiirmer, nvzaling a pull of rival forces, to one of which Herr Hitler yielded. There were the preparations made for a meeting of the Reichstag last Sunday, followed by the decision not to convene the Reichstag after all. There is the threat to the position of Field-Marshal Blomberg, as Minister of War, which may have political causes, in addition to the resentment felt in army circles at the action of the Field-Marshal in marrying "beneath him." There is the fact that the installation of Dr. Funk as Minister of Economic Affairs in succession to Dr. Schacht has been postponed for the third time. These events are difficult to interpret accurately, and there is a danger of over-estimating their importance. But one thing appears clear. Whoever may be in jeopardy the position of General Goering grows steadily stronger. The retirement of Dr. Schacht leaves him in undisputed control of the execution of the Four Years' Plan, and the retirement of Field-Marshal von Blomberg might make him Minister of War ; he is, of course, Minister of Air already. There are obviously certain rifts in army circles, and others between the industrialists and the Government. But Herr Hitler, to all appearances, has simply to deal with friction, not dislocation.