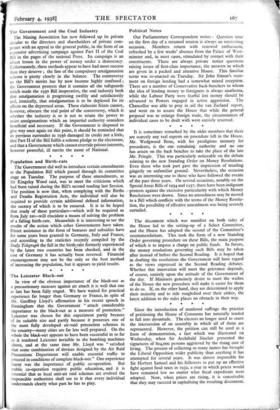 Page 3, 4 February 1938 — Population and Birth-rate The Government did well to introduce certain
Close

Population and Birth-rate The Government did well to introduce certain

amendments to the Population Bill which passed through its committee stage on Tuesday. The purpose of these amendments, as Sir Kingsley Wood said, was to meet the criticisms which had been raised during the Bill's second reading last Session. The position is now that, when complying with the Births and Deaths Registration Acts, the individual will also be required to provide certain additional defined information, the secrecy of which is to be ensured. It is to be hoped that study of these particulars—which will be required as from July 1st—will elucidate a means of solving the problem of a falling birth-rate. Meanwhile it is interesting to see the results of the action which other Governments have taken. Direct assistance in the form of bonuses and subsidies have for some years been granted in Germany, Italy and France, and according to the statistics recently compiled by the Daily Telegraph the fall in the birth-rate formerly experienced by the latter two countries has been checked, and in the case of Germany it has actually been reversed. Financial encouragement may not be the only or the best method of increasing the population, but it appears to yield results.