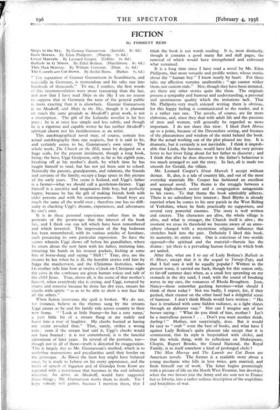 "THE reputation of Gunnar Gunnarsson in Scandinavia, and especially in Germany, is tremendous and his sales run into hundreds of thousands." To me, I confess, the first words of this recommendation were more reassuring than the last, and now that I have read Ships in the Sky I see no reason to suppose that in Germany the taste of the general public is more exacting than it is elsewhere. Gunnar Gunnarsson is no Aksakoff, and Ships in the Sky, though it is planned on much the same grounds as Aksakoff's great work, is not a masterpiece. The gift of the Icelandic novelist is far less pure ; he is at once less simple and less subtle, and though he is a vigorous and capable writer he has neither Aksakoff's spiritual charm nor his fastidiousness as an artist.

This autobiographical novel may, of course, contain less actual autobiography than one suspects, but it is said to be, and certainly seems to be, Gunnarsson's own story. The whole work, The Church on the Hill, must be designed on a huge scale, for the present instalment, though a long book, brings the hero, Uggi Greipsson, only as far as his eighth year, breaking off at his mother's death, by which time he has taught himself to read, but has not yet been sent to school. Naturally the parents, grandparents, and relations, the friends and servants of the family, occupy a large space in this picture of the early years. The scene is Iceland, and Uggi's father is a farmer—what we should call a gentleman-farmer. Uggi himself is a sensitive and imaginative little boy, but perfectly happy, because he has the gift of making friends both with older persons and with his contemporaries. Small boys are much the same all the world over ; therefore one has no diffi- culty in checking Uggi's dreams, experiences, and adventures by one's own.

It is in these personal experiences rather than in the portraits of the grown-ups that the interest of the book lies, and I think one can tell which have been remembered and which invented. The impression of the big bedroom has been remembered, with its various articles of furniture, each possessing its own particular expression. So have the scenes wherein Uggi shows off before his grandfather, where he struts about the new farm with his father, imitating him, thrusting his hands in his trouser pockets, kicking at some bits of horse-dung and saying " Hell ! " True, also, are the dreams he has when he is ill, the horrible stories told him by Sigga the maidservant, and the Christmas festivities, when his mother tells him how at twelve o'clock on Christmas night the cows in the cowhouse are given human voices and talk of the child Jesus. True, above all, is the scene of that mother's funeral, when everybody else is crying, and Uggi, tortured by shame and remorse because he alone has dry eyes, smears his cheeks with spittle "so as to be able to show a wet face like all the others."

When fiction intervenes the spell is broken. We do not, for instance, believe in the rhymes sung by the streams Uggi passes as he and his family ride across country to their new home. " ' Look at little Stump—he has a sore rump,' a pert little bit of a stream flung at me rudely and burst into a roar of laughter. My cheeks burned at having my secret revealed thus." That, surely, strikes a wrong note : even if the stream had said it, Uggi's cheeks would not have burned : it is not remembered, it is the fanciful adornment of later years. In several of the portraits, too— though not in all of them—truth is distorted by exaggeration. This is largely due to Mr. Gunnarsson's method, which is to underline mannerisms and peculiarities until they border on the grotesque. As Bjossi the farm boy might have behaved once, he is made to behave on his every appearance, and the tricks of speech of Sigurjon and of Grandpa from Knor are repeated with a persistence that becomes in the end infinitely tiresome. An artist, an Aksakoff, would have suggested these things ; Mr. Gunnarsson works them to death. Yet I hope nobody will gather, because I mention them, that I think the book is not worth reading. It is, most distinctly, though it contains a good many flat and dull pages, the removal of which would have strengthened and enlivened what remained.

It is a long time since I have read a novel by Mr. Eden Phillpotts, that most versatile and prolific writer, whose stories about the "human boy" I know nearly by heart. For those tales my affection remains unalterable ; "age cannot wither them, nor custom stale." Nor, though they have been imitated, are there any other stories quite like them. The originals possess a sympathy and humour and understanding, a personal and spontaneous quality which the imitations lack. That Mr. Phillpotts very much enjoyed writing them is obvious, for this happy feeling is communicated to the reader, and it is a rather rare one. The novels, of course, are far more elaborate, and, since they deal with adult life and the passions of men and women, will generally be regarded as more important. I do not share this view. I liked Dark Horses up to a point, because of the Devonshire setting, and because of the pleasantness and wisdom of the mind behind the book. But the actual working out of the plot pleased me less. It is dramatic, but it certainly is not inevitable. I think it improb- able that Linda, the heroine, would have left that very private letter to her lover lying about for her father to discover ; and I think that after he does discover it the father's behaviour is too much arranged to suit the story. In fact, all is made too smooth for Gerald, the villain.

Mr. Leonard Cooper's Great Marvels I accept without demur. It, also, is a tale of country life, and out of the most everyday materials Mr. Cooper has fashioned an excellent and unusual novel. The theme is the struggle between a young high-church rector and a congregation antagonistic to his views. To that theme the book admirably adheres. There is no subsidiary love interest ; Basil Blythe is already married when he comes to his new parish in the West Riding of Yorkshire, where he finds practically no supporters, and several very powerful enemies. The story is well written and sincere. The characters are alive, the whole village is alive, and what is stranger, the Church itself is alive ; the moment we cross its threshold we become aware of an atmo- sphere charged with a mysterious religious influence that stretches back• into the past. Definitely I liked this book, its austerity, its entire tone. One is conscious of two worlds opposed—the spiritual and the material—therein lies the drama : yet there is a pervading human feeling in which both are united.

After this, what am I to say of Lady Boileau's Ballade in G Minor, except that it is the sequel to Turnip-Tops, and that I feel sure it will be equally popular ? Written in the present tense, it carried me back, though for this reason only, to far-off summer days when, as a small boy sprawling on my stomach in the dry sand, I read, with the sound of breaking waves in my ears, the romances of Rhoda Broughton. Joan, Nancy—those somewhat gushing heroines—what should I think of them today ? Not too badly, I expect, for, if they gushed, their creator on the other hand had a delightful sense of humour. I don't think Rhoda would have written : "His face is irradiated with some hidden radiance, as a light shines through an alabaster vase." Nor can I imagine any of her heroes saying : "What do you think of him, mother ? Isn't he a marvellous person ? . . . Don't you want another drink, darling ? " Mother, not surprisingly, does. But it would be easy to " crab " even the best of books, and what have I against Lady Boileau's quite pleasant tale except that it is sentimental, that its style is besprinkled with clichés, and that the whole thing, with its reflections on Shakespeare, Chopin, Rupert Brooke, the Grand National, the Royal Family, is in itself somehow a kind of prolonged cliché?

This Man Murray and The Laurels are Cut Down are American novels. The former is a readable story about a young mechanic who falls in love twice, gets married, and finds himself out of work. The latter begins promisingly with a picture of life on the North West Frontier, but develops, when the two heroes join the Army and are sent not to France but to Siberia, into a rather tedious description of the stupidities and brutalities of war.