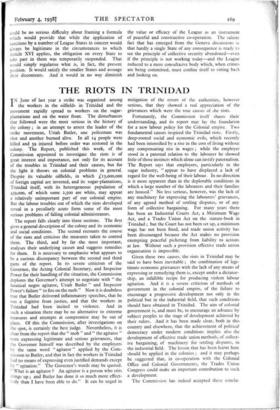 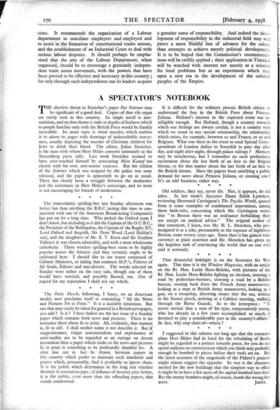 THE RIOTS IN TRINIDAD

INJune of last year a strike was organised among the workers in the oiffields in Trinidad and the movement rapidly spread to workers on the sugar- plantations and on the water front. The disturbances that followed were the most serious in the history of the colony ; in an attempt to arrest the leader of the strike movement, Uriah Butler, one policeman was shot and another burned alive. In all 14 people were killed and 59 injured before order was restored in the colony. The Report, published this week, of the Commission appointed to investigate the riots is of great interest and importance, not only for its account of the troubles in Trinidad and their causes, but for the light it throws on colonial problems in general. Despite its valuable oilfields, in which £15,000,000 of foreign capital are invested, and its sugar-plantations, Trinidad itself, with its heteregeneous population of 439,000, of which some 2,500 are white, may appear a relatively unimportant part of our colonial empire. But the labour troubles out of which the riots developed reveal in a peculiarly acute form some of the most serious problems of falling colonial administrators.

The report falls clearly into three sections. The first gives a general description of the colony and its economic and social conditions. The second recounts the course of the riots and criticises the measures taken to control them. The third, and by far the most important, analyses their underlying causes and suggests remedies for them. It is necessary to emphasise what appears to be a curious discrepancy between the second and third parts of the report. In its severe criticism of the Governor, the Acting Colonial Secretary, and Inspector Power for their handling of the situation, the Commission deplores the Governor's attempt to negotiate with "the fanatical negro agitator, Uriah Butler" and Inspector Power's failure" to fire on the mob." Now it is doubtless true that Butler delivered inflammatory speeches, that he was a fugitive from justice, and that the workers in Trinidad had been incited to violence. And in such a situation there may be no alternative to extreme measures and attempts at compromise may be out of place. Of this the Commission, after investigations on the spot, is certainly the best judge. Nevertheless, it is clear from the report that the" mob " and " the agitator" were expressing legitimate and serious grievances, that the Governor himself was described by the employers by the same word " agitator " applied by the Com- mission to Butler, and that in fact the workers in Trinidad had no means of expressing even justified demands except by "agitation." The Governor's words may be quoted. "What is an agitator ? An agitator is a person who stirs things up ; and Butler has done it so much more effect- ively than I have been able to do." It can be urged in mitigation of the errors of the authorities, however serious, that they showed a real appreciation of the grievances which were the true causes of che riots.

Fortunately, the Commission itself shares their understanding, and its report may lay the foundation for a new labour policy for the Colonial empire. Two fundamental causes inspired the Trinidad riots. Firstly, deep-rooted social and economic evils, which recently had been intensified by a rise in the cost of living without any compensating rise in wages ; while the employer stood in a paternal relation to the labourer he showed little of those instincts which alone can justify paternalism. The Report says that employers, particularly in the sugar industry, "appear to have displayed a lack of regard for the well-being of their labour. In no direction is it more apparent than in the deplorable conditions in which a large number of the labourers and their families are housed." No less serious, however, was the lack of any machinery for expressing the labourers' grievances, of any agreed method of settling disputes, or of any form of collective bargaining. For many years there has been an Industrial Courts Act, a Minimum Wage Act, and a Trades Union Act on the statute-book in Trinidad ; but the Court has not been set up, a minimum wage has not been fixed, and trade union activity has been discouraged because the Act makes no provision exempting peaceful picketing from liability to actions at law. Without such a provision effective trade union organisation is impossible.

Given these two causes, the riots in Trinidad may be said to have been inevitable.; the combination of legi- timate economic grievances with the lack of any means of expressing or remedying them is, except under a dictator- ship, an infallible recipe for producing violent labour agitation. And it is a severe criticism of methods of government in the colonial empire, of the failure to encourage a progressive development not only in the political but in the industrial field, that such conditions should have obtained in Trinidad. The aim of colonial government is, and must be, to encourage an advance by subject peoples to the stage of development achieved by their rulers. And it has been made clear, both in this country and elsewhere, that the achievement of political democracy under modern conditions implies also the development of effective trade union methods, of collect- ive bargaining, of machinery for settling disputes, in the industrial field. The lesson that has been learnt here should be applied in the colonies ; and it may perhaps be suggested that, in co-operation with the Colonial Office and Colonial Governments, the Trades Union Congress could make an important contribution to such a development.

The Commission has indeed accepted these conclu- sions. It recommends the organisation of a Labour department to conciliate employers and employed and to assist in the formation of constitutional trades unions, and the establishment of an Industrial Court to deal with serious labour disputes. It should perhaps be empha- sised that the aim of the Labour Department, when organised, should be to encourage a genuinely indepen- dent trade union movement, with the powers that have been proved to be effective and necessary in this country ; for only through such independence can its leaders acquire a genuine sense of responsibility. And indeed the deve- lopment of responsibility in the industrial field may well prove a more fruitful line of advance for the colony than attempts to achieve merely political development. It is to be hoped that the Commission's recommenda- tions will be swiftly applied ; their application in Trinidad will be watched with interest not merely as a solution for local problems but as an experiment which ma-v open a new era in the development of the colonial peoples of the Empire.