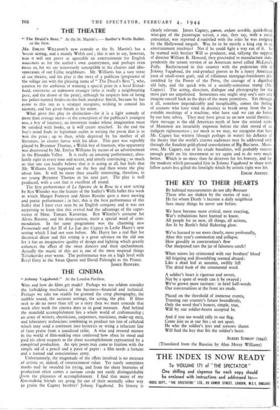 "Johnny Vagabond." At the London Pavilion.

WHY and how do films get made? Perhaps we too seldom consider the forbidding mechanics of the business—financial and technical. Perhaps we take too readily for granted the crisp photography, the audible sound, the accurate settings, the acting, the plot. If films seek to do no more than tell us a story then we must concede that week after week the cinema does so in good measure. And behind the manifold accomplishment lies a whole world of craftsmanship ; an army of writers, electricians, carpenters, musicians, make-up men, and laboratory technicians combining to produce ten tins of celluloid which may send a continent into hysterics or wring a reluctant line of faint praise from a jaundiced critic. A wise and revered mentor in the world of film-making once confessed how often he stood and paid his silent respects to the sheer accomplishment represented by a completed production. An epic poem may come to fruition with the simple aid of a pencil and a piece of paper : a film needs a fortune and a trained and conscientious army.

Unfortunately, the magnitude of the effort involved is no measure of artistic or, indeed, of entertainment value. Yet surely sometimes marks ma5, be awarded for trying, and from the sheer braveries of production often comes a sursum corda not easily distinguishable thorn the pleasures of accomplishment. I find that many of my film-making friends are going far out of their normally sober way to praise the Cagney brothers' lohnny Vagabond. Its history is clearly relevant. James Cagney, ganun, enfant terrible, quick-fisted wise-guy of the picaresque screen, a star, they say, with a social conscience, was reported d.ssatisfied with the roles he was assigned by the Hollywood moguls. Was he to be merely a king cog in an entertainment machine? Not if he could fight a way out of it. So he teamed with brother Will as producer, and, rallying the support of director William K. Howard, they proceeded to manufacture independently the screen version of an American novel called McLeod's Folly. Rechristened in this country with the pedestrian title of lohnny Vagabond, the end-product proves to be a hoary American yarn of small-town graft, and of villainous mortgage-foreclosers discomfited by the Power of the Press, the courage of a dignified old lady, and the quick wits of a socially-conscious tramp (Mr. Cagney). The acting, direction, dialogue and photography for the most part are unpolished. Sometimes one might stop one's ears and imagine oneself back in the days of the mute primitives. Yet through it all, somehow imponderably and inexplicably, comes the feeling of creators who have tried in decency to break away from the inevitable meshings of a machine, who have said we can do better by our lone selves. They may have given us no new social theories ; their message is the old American myth of how the serried ranks of Mammon are invariably impotent before the slim sword of an indigent righteousness ; yet mock as we may, we recognise that here Mr. Cagney has written (though perhaps in water) his defiance of the theory that the world's cinema audiences may be addressed only through the flatulent gold-plated convolutions of Big Bus:ness. Moreover, Mr. Cagney, out of his crude banalities, will probably recover enough profit on his investment to try again and to do very much better. Which is no more than -he deserves for his bravery, and for the modesty which persuaded him in Yohnny Vagabond to share with fellow actors less gifted the limelight which by artistic right was his.