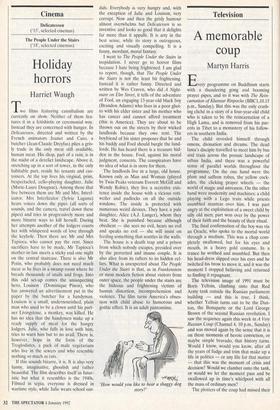 Two films featuring cannibalism are currently on show. Neither of them fea- tures it in a fetishistic or ceremonial way. Instead they are concerned with hunger. In Delicatessen, directed and written by the French animators Jeunet and Caro, a butcher (Jean-Claude Dreyfus) plies a gris- ly trade in the only meat still available, human meat. His shop, part of a ruin, is in the midst of a derelict landscape. Above it, stretching up in a sort of tower, in the only habitable part, reside his tenants and cus- tomers. At the top lives his virginal, prim, bespectacled, cello-playing daughter, Julie (Marie-Laure Dougnac). Among those that live between them are Mr and Mrs. Interl- izator. Mrs Interlizator (Sylvie Laguna) hears voices down the pipes (all sorts of sounds, and the camera, travel down these pipes) and tries in progressively more and more bizarre ways to kill herself. During her attempts another of the lodgers courts her with whispered words of love through the keyhole. Then there are Mr and Mrs Tapioca, who cannot pay the rent. Since sacrifices have to he made, Mr Tapioca's mother-in-law meets a sticky end one night on the central staircase. There is also Mr Potin, who probably does not need much meat as he lives in a swamp room where he breads thousands of snails and frogs. Into this odd set-up comes the unsuspecting hero, Louison (Dominique Pinon), who has answered an advertisement put in the paper by the butcher for a handyman. Louison is a small, undernourished, plain man who used to be a clown until his part- ner Livingstone, a monkey, was killed. He has no idea that the handymen make up a ready supply of meat for the hungry lodgers. Julie, who falls in love with him, tries to warn him but to no avail. There is, however, hope in the form of the Troglodistes, a pack of male vegetarians who live in the sewers and who resemble nothing so much as rats. If this sounds bizarre, it is. It is also very funny, imaginative, ghoulish and rather beautiful. The film describes itself' as futur- istic but what it resembles is the 1940s. Filmed in sepia, everyone is dressed in wartime style, while Julie wears school san- dais. Everybody is very hungry and, with the exception of Julie and Louison, very corrupt. Now and then the grisly humour almost overwhelms but Delicatessen is so inventive and looks so good that it delights far more than it appalls. It is arty in the best sense, while its story is outrageous, exciting and visually compelling. It is a funny, mordant, moral fantasy. I went to The People Under the Stairs in trepidation. I never go to horror films because I hate being frightened. I am glad to report, though, that The People Under the Stairs is not the least bit frightening. Instead it is rather funny. Directed and written by Wes Craven, who did A Night- mare on Elm Street, it tells of the adventure of Fool, an engaging 13-year-old black boy (Brandon Adams) who lives in a poor ghet- to with his elder sister and his mother who has cancer and cannot afford treatment (this is America). They are about to be thrown out on the streets by their wicked landlords because they owe rent. The boyfriend of his sister proposes that he and his buddy and Fool should burgle the land- lords. He has heard there is a treasure hid- den in the house. Fool, against his moral judgment, consents. The conspirators have no idea of what is in store for them. The landlords live in a large, old house. Known only as Man and Woman (played by Twin Peaks veterans Everett McGill and Wendy Robie), they live a secretive exis- tence inside the house with a vicious rott- weiler and padlocks on all the outside windows. The inside is protected with numerous weird devices. They have a pale daughter, Alice (A.J. Langer), whom they beat. She is punished because although obedient — she sees no evil, hears no evil and speaks no evil — she will insist on feeding something that scuttles in the walls. The house is a death trap and a prison from which nobody escapes, presided over by the perverted and insane couple. It is also alive from its rafters to its hidden cel- lars. What is unexpected about The People Under the Stairs is that, as in Frankenstein or most modern fiction about visitors from outer space, the people under the stairs are the hideous and frightening victims of human distortion, incomprehension and violence. The film turns America's obses- sion with child abuse to humorous and gothic effect. It is an adult pantomime.

'How would you like to hear a shaggy dog story?'