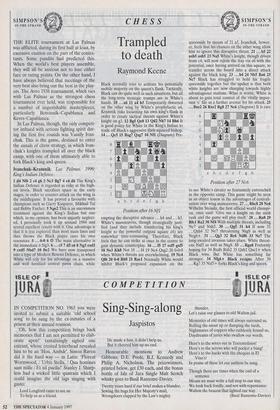 THE ELITE tournament at Las Palmas was afflicted, during its first half at least, by excessive caution on the part of the contes- tants. Some pundits had predicted this. When the world's best players assemble, they will all be anxious not to lose either face or rating points. On the other hand, I have always believed that meetings of the very best also bring out the best in the play- ers. The Avro 1938 tournament, which vies with Las Palmas as the strongest chess tournament ever held, was responsible for a number of imperishable masterpieces, particularly Botvinnik–Capablanca and Keres–Capablanca.

In Las Palmas, though, the only competi- tor imbued with serious fighting spirit dur- ing the first five rounds was Vassily Ivan- chuk. This is the game, destined to enter the annals of chess strategy, in which Ivan- chuk's knights trampled all over the black camp, with one of them ultimately able to fork Black's king and queen.

1 d4 Nf6 2 c4 g6 3 NO Bg7 4 e4 d6 The King's Indian Defence is regarded as risky at the high- est levels. Black sacrifices space in the early stages, in order to counter-attack on the wing in the middlegame. It has proved a favourite with champions such as Garry Kasparov, Mikhail Tal and Bobby Fischer. S Nge2 This is an uncommon treatment against the King's Indian but one which, in my opinion, has been unjustly neglect- ed. I personally took it up around 1984 and scored excellent results with it. One advantage is that it is less explored than most main lines and thus throws the Black player onto his own resources. 5 —.0-0 6 f3 The main alternative is the immediate 6 Ng3. 6 ... c5 7 d5 e6 8 Ng3 exd5 9 cxdS Nbd7 10 Be2 We have now transposed into a type of Modern Benoni Defence, in which White will rely for his advantage on a massive and well fortified central pawn chain, while

Black normally tries to activate his potentially mobile majority on the queen's flank. Tactically, Black can do quite well in such situations, but all the long-term strategic trumps are in White's hands. 10 ...a6 11 a4 h5 Temporarily thwarted on the other wing by White's prophylactic a4, Kramnik risks loosening his own king's flank in order to create tactical threats against White's knight on g3. 12 BO Qe8 13 Qd2 Nh7 14 Bh6 It is good policy for White in the King's Indian to trade off Black's aggressive dark-squared bishop. 14 ... Qe5 15 Bxg7 Qxg7 16 Nfl (Diagram) Pre- Position after 16 Nfl

empting the disruptive advance ...h4 and ...h3. White's manoeuvres, though strategically justi- fied (and they include transferring his king's knight to the powerful outpost square c4) are somewhat time-consuming. Therefore, Black feels that he can strike at once in the centre to gain dynamic counterplay. 16 17 exf5 gxf5 18 Ne3 Kh8 Not 18 ... f4 19 Nc4 Qxg2 20 0-0-0 when White's threats are overwhelming. 19 Nc4 Qf6 20 0-0 Rb8 21 Rael Normally White would inhibit Black's proposed expansion on the queenside by means of 21 a5, Ivanchuk, howev- er, feels that his chances on the other wing allow him to ignore this disruptive thrust. 21 ...b5 22 axb5 axb5 23 Na5 White's knight, though driven from c4, will now rejoin the fray via c6 with the potential, once having arrived on this square, to transfer across the board into a direct attack against the black king. 23 ...b4 24 Nh5 Ba6 25 Nc7 Black has struggled to hold his fragile queenside together but the upshot is that both white knights are now charging towards highly advantageous stations. What is worse, White is about to gain total control of the vitally impor- tant 'e' file as a further avenue for his attack. 25 ...Bxe2 26 Rxe2 Rg8 27 Ne6 (Diagram) It is rare

to see White's cavalry so fearsomely entrenched in the opposite camp. This game might be seen as an object lesson in the advantages of centrali- sation over wing manoeuvres. 27 ...Rbe8 28 Ne6 Wilhelm Steinitz, the first official world champi- on, once said: 'Give me a knight on the sixth rank and the game will play itself.' 28 Ra8 29 Rfel Rat 30 Nf4 With multiple threats, including Ne7 and Nxh5, 30 ...Qg5 31 h4 if now 31