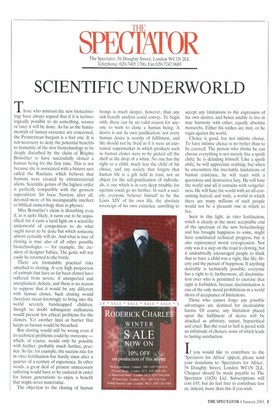 Those who mistrust the new biotechnology have always argued that if it is technologically possible to do something, sooner or later it will be done. As far as the fundamentals of human existence are concerned, the Promethean bargain is a bad one. It is not necessary to deny the potential benefits to humanity of the new biotechnology to be deeply disturbed by the claim of Brigitte Boisselier to have successfully cloned a human being for the first time. This is not because she is associated with a bizarre sect called the Raelians, which believes that humans were created by extraterrestrial aliens. Scientific genius of the highest order is perfectly compatible with the grossest superstition: Sir Isaac Newton, after all, devoted more of his incomparable intellect to biblical numerology than to physics.

Miss Boisselier's claim is disturbing even if, as is quite likely, it turns out to be unjustified; for it casts a lurid light on a scientific underworld of competition to do what ought never to be done but which someone almost certainly will do. And what is true of cloning is true also of all other possible biotechnologies — for example, the creation of designer babies. The genie will not easily be returned to the bottle.

There are formidable practical risks attached to cloning. A very high proportion of animals that have so far been cloned have suffered from severe, if unexpected and unexplained, defects, and there is no reason to suppose that it would be any different with human clones. Such cloning would therefore mean knowingly to bring into the world severely handicapped children, though no doubt subsequent euthanasia would present few ethical problems for the cloners. Yet another limit or barrier that keeps us human would be breached.

But cloning would still be wrong even if its technical problems could be overcome — which, of course, would only be possible with further, probably much further, practice. So far, for example, the success rate for in vitro fertilisation has hardly risen after a quarter of a century of experience. In other words, a great deal of present unnecessary suffering would have to be endured in order for future generations to enjoy a benefit that might never materialise.

The objection to the cloning of human beings is much deeper, however, than any risk-benefit analysis could convey. To begin with, there can be no valid reason for anyone to want to clone a human being. A desire is not its own justification: not every human desire is worthy of fulfilment, and life should not be lived as if it were an existential supermarket in which products such as human clones were to be picked off the shelf at the drop of a whim. No one has the right to a child, much less the child of his choice, and any society that forgets that human life is a gift held in trust, not an object for the self-gratification of individuals, is one which is in very deep trouble; for egotism could go no further. In such a society, everyone believes himself to be the Louis XIV of his own life, the absolute sovereign of his own existence, unwilling to accept any limitations to the expression of his own desires, and hence unable to live in true harmony with other, equally absolute monarchs. Either his wishes are met, or he rages against the world.

Choice is good, but not infinite choice. To have infinite choice is no better than to be coerced. The person who thinks he can choose everything is not merely like a spoilt child; he is deluding himself. Like a spoilt child, he will appreciate nothing; but when he encounters the inevitable limitations of human existence, he will react with a querulous and destructive fury. He will hate the world and all it contains with vengefulness. He will hate the world with an all-consuming hatred; and truly, a world in which there are many millions of such people would not be a pleasant one in which to live.

Seen in this light, in vitro fertilisation, which is clearly at the more acceptable end of the spectrum of the new biotechnology and has brought happiness to some, might have constituted technical progress, but it also represented moral retrogression. Not only was it a step on the road to cloning, but it undoubtedly encouraged people to think that to have a child was a right, like life, liberty and the pursuit of happiness. If anything desirable is technically possible, everyone has a right to it; furthermore, all discrimination over who is permitted to exercise that right is forbidden, because discrimination is one of the only moral prohibitions in a world shorn of acceptance of limitations.

Those who cannot forgo any possible advantages are destined for incalculable harms. Of course, any limitation placed upon the fulfilment of desire will be attacked as arbitrary, unjust, hypocritical and cruel. But the road to hell is paved with an infinitude of choices, none of which leads to lasting satisfaction.