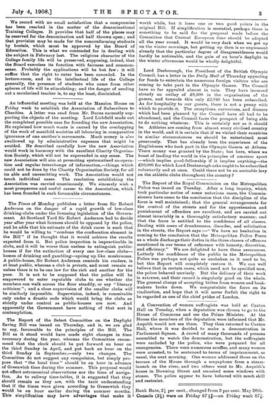 Page 11, 4 July 1908 — The Report of the Royal Commission on the Metropolitan Police
Close

The Report of the Royal Commission on the Metropolitan Police

was issued on Tuesday. After a long inquiry, which took particular notice of some notorious cases, the Commie- sioners have come to the conclusion that the discipline of the force is well maintained; that the general arrangements for the control of the streets and for the apprehension and punishment of offenders are excellent, and are carried out almost invariably in a thoroughly satisfactory manner; and that the force is entitled to the confidence of all classes. Dealing with cases of drunkenness, disorder, and solicitation in the streets, the Report says :—" We have no hesitation in coming to the conclusion that the Metropolitan Police Force as a whole discharge their duties in the three classes of offences mentioned in our terms of reference with honesty, discretion, and efficiency." We are delighted to have these assurances. Latterly the confidence of the public in the Metropolitan Police was perhaps not quite so unshaken as it used to be, but this Report will completely restore it. We can well believe that in certain cases, which need not be specified now, the police behaved unwisely. But the delicacy of their work is extreme, and their record is singularly good on the whole. The general charge of accepting bribes from women and book- makers broke down. We congratulate the force on its vindication, and hope that it will never forfeit the right te be regarded as one of the chief prides of London.