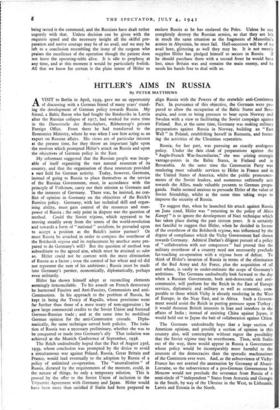 AVISIT to Berlin in April, 1939, gave me an opportunity of discussing with a German friend of many years' stand- ing the development of German policy towards Russia. My friend, a Baltic Baron who had fought the Bolsheviks in Latvia after the Russian collapse of 1917, had worked for some time in the Dienststelle des Botschafters, Ribbentrop's private Foreign Office. From there he had transferred to the Economics Ministry, where he was when I saw him acting as an expert on Russian affairs. His views are of particular interest at the present time, for they throw an important light upon -the motives which prompted Hitler's attack on Russia and upon the objectives of German policy 'in the East.

My informant suggested that the Russian people was incap- able of itself organising the vast natural resources of its country, and that the organisation of those resources provided a vast field for German activity. Today, however, Germans, instead of going to- Russia to place themselves at the service of the Russian Government, must, in accordance with the principle of Volkstum, carry out their mission as Germans and in the interests of Germany. There was, he insisted, no con- flict of opinion in Germany on the objectives of the Reich's Russian policy. Germany, with her technical skill and organ- ising ability, must gain control of the resources and man- power of Russia ; the only point in dispute was the question of method. Could the Soviet regime, which appeared to be moving steadily away from the tenets of the world-revolution and towards a form of " national " socialism, be prevailed upon to accept a position as the Reich's junior partner? Or must Russia be attacked in order to compass the overthrow of the Bolshevik regime and its replacement by another more pre- pared to do Germany's will? But the question of method was subordinate to the agreed aim, which must be attained so oder so. Hitler could not be content with the mere elimination of Russia as a factor ; even the control of her wheat and oil did not represent the sum of his ambitions ; Russia must be made into Germany's partner, economically, diplomatically, perhaps even militarily.

Hitler has shown himself adept at reconciling elements seemingly irreconcilable. To his assault on French democracy he harnessed Fascists and Anti-Fascists, Communists and anti- Communists. In his approach to the problem of Russia, he kept in being the Treaty of Rapallo, whose provisions went far further than those of a mere treaty of non-aggression ; he gave large commercial credits to the Soviet Union and fostered German-Russian trade ; and at the same time he mobilised German opinion for the anti-Communist crusade. Diplo- matically, the same technique served both policies. The isola- tion of Russia was a necessary preliminary, whether she was to be conquered or made into Germany's ally That isolation was achieved at the Munich Conference of September, 1938.

The Reich undoubtedly hoped that the Pact of August 23rd, 1939, whose conclusion was prompted by the desire to avoid a simultaneous war against Poland, Russia, Great Britain and France, would lead eventually to the adoption by Russia of a policy of unlimited co-operation. The " neutralisation " of Russia, dictated by the requirements of the moment, could, in the nature of things, be only a temporary solution. This is proved by the offer to the Soviet Union of inclusion in the Tripartite Agreement with Germany and Japan. Hitler would have been more than satisfied if Stalin had been prepared to align Russia with the Powers of the erstwhile anti-Comintern Pact. In pursuance of this objective, the Germans were pre- pared to allow the occupation of the Baltic States and Bess- arabia, and even to bring pressure to bear upon Norway and Sweden with a view to facilitating the Soviet campaign against Finland. But, at the same time, Germany was making military preparations against Russia in Norway, building an " East Wall " in Poland, establishing herself in Rumania, and foster- ing the activities of the Ukrainian separatists.

Russia, for her part, was pursuing an exactly analogous policy. Under the thin cloak of preparations against the " Anglo-French War-Incendiaries," she was seizing strategic vantage-points in the Baltic States, in Finland and in Bessarabia. At the same time the Communist Party was rendering most valuable services to Hitler in France and in the United States of America, whilst the public pronounce- ments of the Soviet leaders, and numerous unfriendly acts towards the Allies, made valuable presents to German propa- ganda. Stalin seemed anxious to persuade Hitler of the value of Soviet friendship, whilst at the same time taking steps to improve the security of Russia.

To suggest that, when he launched his attack against Russia on June 22nd, Hitler was " returning to the policy of Mein Kampf " is to ignore the development of Nazi technique which has taken place during the past sixteen years. It is certainly not fanciful to suggest that Hider, when he decided in favour of the overthrow of the Bolshevik regime, was influenced by the degree of compliance which the Vichy Government had shown towards Germany. Admiral Darlan's diligent pursuit of a policy of " collaboration with our conquerors " had proved that the military overthrow of a country need not necessarily preclude far-reaching co-operation with a regime born of defeat. To think of Hitler's invasion of Russia in terms of the elimination of the Red Army and Air Force, plus the acquisition of oil and wheat, is vastly to under-estimate the scope of Germany's ambitions. The Germans undoubtedly look forward to the day when a Russian Government, both anti-democratic and anti- communist, will perform for the Reich in the East of Europe services, diplomatic and military as well as economic, com- parable to those which Vichy is already rendering in the West of Europe, in the Near East, and in Africa. Such a Govern- ment would assist the Reich in putting pressure upon Turkey ; it would threaten British interests in Iran and interfere in the affairs of India ; instead of assisting China against Japan, it would hold out to Japan the bait of collaboration against China.

The Germans undoubtedly hope that a large section of American opinion, and possibly a section of opinion in this country also, will contemplate without regret the possibility that the Soviet regime may be overthrown. Then, with Stalin out of the way, there would appear in Russia a Government whose policy would be incomparably more harmful to the interests of the democracies than the sporadic machinations of the Comintern ever were. And, as the subservience of Vichy- France has not averted the annexation by Germany of Alsace- Lorraine, so the subservience of a pro-German Government in Moscow would not preclude the severance from Russia of a semi-circle of " independent " States from Armenia and Georgia in the South, by way of the Ukraine in the West, to Lithuania, Latvia and Estonia in the North.