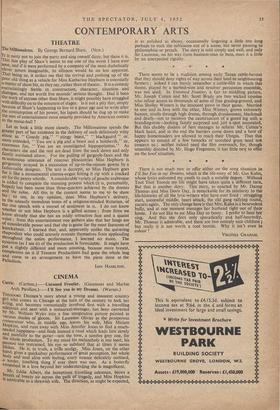 Carrie. (Carlton.)—Untamed Frontier. (Gaumont and Marble Arch Pavilion.)—I'll See you in my Dreams. (Warner.) THEODORE DREISER'S story about a young and innocent country -girl who comes to Chicago at the turn of the century to seek her living, and becomes romantically involved first with a travelling salesman and next with a restaurant-manager, has been converted by Mr. William Wyler into a fine imaginative picture painted in Various shades of gloom. Sir Laurence Olivier as the prosperous restaurateur who, in middle age, leaves his wife, Miss Miriam Hopkins, and runs away with Miss Jennifer Jones to find a much- needed happiness—and finds instead a road which leads him slowly and painfully to the gutter—sets the tone, a sombre grey one, for the whole production. To my mind his melancholy is too inert, his Passion too restrained, his eye so subdued that at tunes it seems lifeless. He is, in truth, a trifle stodgy. Miss Jones, on the other hand, gives a quicksilver performance of great perception, her whole body and soul alive with feeling, every nuance delicately outlined, a tender, touching thing if ever there was one. As a butterfly enmeshed in a love beyond her understanding she is magnificent. Mr. Eddie Albert, the bumptious travelling salesman, blows a breath of breezy air across the path of tragedy, and Miss Hopkins is admirable as a shrewish wife. The direction, as might be expected, is as polished as ebony, occasionally lingering a little too long perhaps to suck the substance out of a scene, but never pausing to philosophise'or preach. The story is told simply and well, and only Sir Laurence, on his way from business-man to bum, mars it a little by an unexpected rigidity.

There seems to be a tradition among early Texan cattle-barons that they should deny rights of way across their land to neighbouring farmers ; indeed I can barely remember a cattle-film in which this theme, played by a barbed-wire and revolver percussion ensemble, was not used. In Untamed Frontier, a, fair to middling picture, Mr. Joseph Cotten and Mr. Scott Brady are two wicked cousins who refuse access to thousands of acres of free grazing-ground, and Miss Shelley Winters is the innocent pawn in their game. Married to one and in love with the other, Miss Winters, grown extremely buxom, strolls through high drama, through drunkenness, blackmail and death—not to mention the cauterisation of a gored leg with a branding-iron—looking faintly surprised and just a spot nauseated. But this chubby disdain of hers manages to reform Mr. Cotten's black heart, and in the end the barriers come down and a host of happy homesteaders are allowed to reach their Utopia. That this appears to consist of a few tussocks of scorched grass need not concern us ; neither indeed need the film overmuch, for, though smoothly directed by Mr. Hugo Fregonese, it has little new to offer on the hoof situation.

There is not much new to offer either on the song situation in I'll See You in my Dreams, which is the life-story of Mr. Gus Kahn, whose lyrics enlivened my youth to such a notable degree. Without Toot Toot Tootsie my life might have taken quite a different turn. But that is another story. This story, as enacted by Mr. Danny Thomas and Miss Doris Day, is remarkable for its similarity to the life-histories of all the lyric-writers who have ever lived : struggling start, successful middle, heart attack, the old gang rallying round, success again. The only change here is that Mrs. Kahn is a benevolent bully, and at one moment manages her husband right out of their home. I do not like to see Miss Day so bossy. I prefer to hear het sing. And this she don only sporadically and half-heartedly. Mr. Thomas is admirable, and there are two entirely nice children ; but really it is not worth a toot tootsie. Why it isn't even in colour !