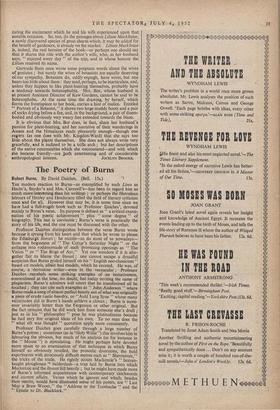 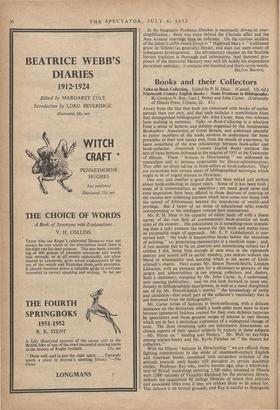 The Poetry of Burns

Robert Burns. By David Daiches. (Bell. 15s.) -t THE modern reaction to Burns—as exemplified by such Lives as Hecht's, Snyder's and Mrs. Carswell's—has been to regard him as .much more: interesting than his writings ; or perhaps the Herculean labours of Henley and Henderson tilled. the field of literary criticism once and for all. However that may be, it is some time since we have had a full-length book such as Professor Daiches', devoted mainly to Burns's verse. Its purpose is defined as " a critical exami- nation of his poetic achievement " plus " some degree " of biography. This last is inevitable ; Burns's verse is practically the story of his life, and the one must be discussed with the other.

Professor Daiches distinguishes between the verse Burns wrote because it sprang from his heart and that which he wrote to please the Edinburgh literati ; he recoils—as do most of us nowadays— from the bogusness of " The Cottar's Saturday Night " or the collapse into rodomontade of such promising openings as " The Vision " or " The Brigs of Ayr," Yet one wonders if it is alto- gether fair to blame the literati ; one cannot escape a dreadful suspicion that Burns prided himself on his " English neo-classicism " based on models, albeit bad models, which he revered. He was, of course, a derivative writer—even in the vernacular ; Professor Daiches marshals some striking examples of an imitativeness, conventional at the time, no doubt, but today inviting the name of -plagiarism. Burns's admirers will retort that he transformed all he -touched; they can cite such examples as " John Anderson " where Burns made a song of almost perfect beauty out of what was originally a piece of-crude rustic tawdry, or "Auld Lang Syne " whose many vicissitudes did in Burns's hands achieve a climax ; Burns is more- over invariably better than the Fergusson or other original. But the fact remains that he did work best from someone else's draft ; just as in his " philosopher " pose he was platitudinous because he had very few original ideas of his own. To no man does the " what oft was thought " quotation apply more consistently.

Professor Daiches goes carefully through a large number of Burns's poems ; sometimes (as in "Holy Willie") this involves him in labouring the obvious, but much of his analysis (as for instance in the " Mouse ") is stimulating. He might perhaps hate devoted more space to an examination of that technique in which Burns himself so obviously revelled, the prosodic diversions, the bold experiments with atrociously difficult metres such as " Sherramuir," the tricks of the trade. He rightly scouts Mackenzie's " heaven- taught ploughman 'a balderdash—a trap laid by Burns into which Mackenzie and the literati fell heavily ; but he might have made more of Burns's informed acquaintance with contemporary catchwords and current affairs. Verses which he ignores and which, besides their .merits, would have illustrated some of his points, are " Last May a Braw Wooer," the "Address to the Toothache " and the " Epistle to Dr. Blacklock." In his biography Professor Daiches is necessarily driven to over- simplification ; there was more behind the Clarinda affair and the Jean Armour marriage than he indicates. On the curious incident of the infant's coffin-board found in " Highland Mary's " traditional grave he follows (as generally) Snyder, and does not seem aware of subsequent developments. His introductory chapter on the Scottish literary tradition is thorough and informative. And harassed pro- posers of the Immortal Memory may well lift bodily his stupendous peroration sentence ; it contains one hundred and thirty-seven words.