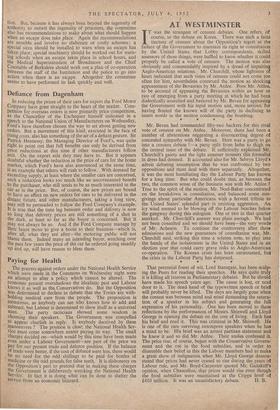 The prayers against orders under the National Health Service which were made in the Commons on Wednesday night were an attempt to alter a policy which cannot be altered. The economic present overshadows the idealistic past and Labour knows it as well as the, Conservatives do. But the Opposition was determined to declare in debate that the Tories are with- holding medical care from the people. The proposition is monstrous, as anybody can see who knows how to add and subtract, but Labour is determined to show itself as a universal aunt. .The party tacticians showed some wisdom in choosing their speakers. The Government was compelled to appear churlish in reply. Is anybody deceived by these manoeuvres ? The position is clear; the National Health Ser- vice must come somewhere nearer paying its way. The small charges decided on—which would by this time have been made even under a Labour Government—are part of the price we pay for our present trade and defence position. If the balance of trade were better, if the cost of defence were less, there would be no need for the odd shillings to be paid for bottles of medicine or the odd pounds for false teeth,. It is dishonesty on the Opposition's part to pretend that in making these charges the Government is deliberately wrecking the National Health Service. In fact it is doing what can be done to shelter the service from an economic blizzard.