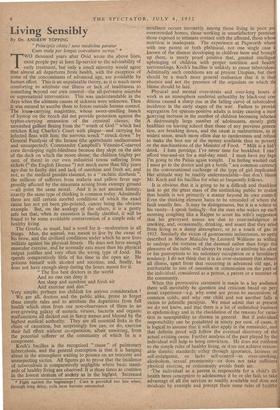 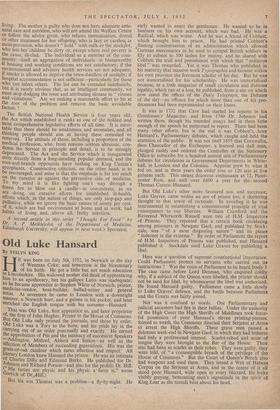 "Principiis obsta ! sero medicina paratur Cum mala per longas convaluere moras." * TWO thousand years after Ovid wrote the above lines, most people pay at least lip-service to the advisability of early treatment, but only a small minority would agree that almost all departures from health, with the exception of some of the concomitants of advanced age, are avoidable by human effort. This is an unpalatable theory, as it is much more comforting to attribute our illness or lack of healthiness to something beyond our own control—the all-pervasive microbe or supernatural intervention. This was understandable in the days when the ultimate causes of sickness were unknown. Then it Was natural to ascribe them to forces outside human control. The lousa-carrying magistrate, whose sweet-smelling bunch of hyssop on the bench did not provide protection against the typhus-carrying emanation of the criminal classes; the unwashed gallant fleeing from the " wrath of God " which had stricken King Charles's Court with plague—and carrying his infected fleas with him; the nervous wreck " struck down ' by General Paralysis of 'the Insane (the spirochaete undiscovered and unsuspected); Commander Campbell's Vitamin-C-starved crew developing night-blindness because they slept on the side of the deck on which the moon shone; the children (eighty per cent. of them) in our own industrial towns suffering from rickets (" the English Disease ") not much more than fifty years ago due to faulty diet and lack of sunshine and fresh air, and not, as the medical pundits claimed, to a " rachitic diathesis "; the millions of sufferers from malaria and yellow fever sup- posedly affected by the miasmata arising from swampy ground —all point the same moral. And it is not ancient history; exactly the same type of thinking is common today. Admittedly there are still certain morbid conditions of which the exact cause has not yet been pin-pointed, cancer being the obvious example. But, on the analogy of the others, it is a pretty safe bet that, when its causation is finally clarified, it will be found to be some avoidable contravention of a simple rule of healthy living. The Greeks, as usual, had a word for it—moderation in all things. Man, the animal, was meant to live by the sweat of his brow, and the civilised conditions under Which he now lives militate against his physical fitness. He does not have enough muscular exercise, and he normally eats more than his physical output justifies and very often the wrong type of food. He spends comparatively little of his time in the open air. He poisons himself with alcohol and nicotine, and, finally, he does not have enough sleep during the hours meant for it. " The five best doctors in the world And no one can deny it Are sleep and sunshine and fresh air And exercise and diet."

Very simple; perhaps too childish for serious consideration I We are all, doctors and the public alike, prone to forget these simple rules and to attribute the departures from full health which stem from our non-observance of them to an ever-growing galaxy of esoteric viruses, bacteria and organic malfunctions all decked out in fancy names and blessed by the highest medical authority. They are all essential links in the chain of causation, but surprisingly few can, or do, exercise their full effect without co-operation, albeit unwitting, from the potential sufferer or the community of which he is a component. Koch's bacillus is the recognised " cause " of pulmonary tuberculosis, and the general conception is that it is hanging about in the atmosphere waiting to pounce on_an innocent and unsuspecting victim. All figures go to prove that the incidence incidence occurs inevitably among those living in poor an( overcrowded homes, those working in unsatisfactory premises those exposed to intimate contact with the affected, those whost nutrition is inadequate. The experience at Papworth where with one parent or both phthisical, not one single case is known of the disease developing in children born and broughi up there, is surely proof positive that, granted intelligent upbringing of children with proper nutrition and health) surroundings, Koch's bacillus is unlikely .to cause tuberculosis Admittedly such conditions are at present Utopian, but then should be a much more general realisation that it is theil absence and not the presence of the organism on which the blame should be laid.

Physical and mental over-strain and over-long hours of work in an atmosphere rendered unhealthy by black-out con ditions caused a sharp rise in the falling curve of tuberculosis incidence in the early stages of the war. Failure to provide segregation for sputum-positive adults is today causing a most ,yeorrying increase in the number of children becoming infected A distressingly large number of adolescents, mostly girls, healthier on leaving school than those of any previous genera. tion, are breaking down, and the cause is malnutrition, in its widest sense, much more often due to carelessness and refusal to make the best use of the money available than to poverty or the machinations of the Minister of Food. " Milk is a kid's drink. I hate porridge. I've never time for breakfast. I can't afford one-and-six for a mid-day meal. I must have my fags. I'm going to the Palais again tonight. I'm feeling washed out I must go to the doctor and get a bottle " are common currency in the conversational exchange of the type of girl implicated. Her 'attitude may be readily understandable—but don't blame Mr. Koch and his bacillus for what so frequently follows.

It is obvious that it is going to be a difficult and thankless task to get the great mass of the unthinking public to realise that health is not' primarily a matter beyond its own control. Even the thinking element hates to be reminded of where the fault usually lies. It may be disingenuous, but it is a solace to, his vanity—I speak feelingly—for the man who wakes up each morning coughing like a Rajput to scout his wife's suggestion that his graveyard noises are due to over-indulgence in smoking, and, occasionally, drinking, and assert that they arise from living in a damp atmosphere, or .,to a touch of gas in 1915. Similarly the victim of gastronomic indiscretion, so aptly described in Minor Maladies by Leonard Williams as willing' to undergo the tortures of the damned rather than forgo the pleasures of the table, will always be ready to attribute his ulcer or his gastroptosis to his sedentary occupation or a hereditary tendency. I d6 not think that it is an over-statement that almost all illness, apart from that occurring in advanced old age, is attributable to sins of omission or commission on the part of the individual, considered as a person, a parent or a member of the community.

When this provocative statement is made to a lay audience there will inevitably be question and criticism based 'on per- gonal experience—e.g. why some are prone to successions of . common colds, and why one child and not another falls a, victim to infantile paralysis. We must admit that at present we do not know, and that there is a lot of unfinished business in epidemiology and in the elucidation of the reasons for varia- tion in susceptibility to disease in general. But if individual responsibility can be postulated in ninety per cent. of cases, it is logical to assume that it will also apply in the remainder, and that definite proof will follow the eventual discovery of the actual existing cause. Further analysis of the part played by the individual will help to bring conviction. He does not conform to the simple rules of healthy living, or does not achieve reason- able dietetic standards either through ignorance, laziness or self-indulgence, or lacks self-control—in over-smoking, alcoholism, sexual promiscuity—or does not take sufficient physical exercise, or consistently avoids fresh air. living. The mother is guilty who does riot haVe adequate ante- natal care and nutrition, who will not attend the Welfare Centre or follow the advice given, who refuses immunisation, dental or other treatment for her offspring, who is lazy or careless in meal-provision, who doesn't " hold " with milk or the stockpot, who lets her`children be dirty or, except where real poverty is the cause, ill-clad. The individual as a member of the com- munity—itself an aggregation of individuals—is blameworthy if housing and working conditions are not satisfactory; if the environmental and advisory health services are not adequate; if smoke is allowed to deprive the town-dwellers of sunlight; if hospital accommodation is not sufficient—particularly for those who can infect others. The list can be extended indefinitely, but it is surely obvious that, as an intelligent community, we must stop dodging the issue and attributing disease to " viruses and visitations." Are we making a reasonable effort to hit at the root of the problem and remove the basic avoidable factors ?

The British National Health Service is four years old; the Act which established it ranks as one of the boldest .and most comprehensive legislative efforts of all time. It is inevi- table that there should be weaknesses and anomalies, and all thinking people should aim at having these remedied or removed. The attitude of those, including a proportion of the medical profession, who, front reasons seldom altruistic, con- demn the Service in principle and detail, is to be strongly deprecated. The Act and the. Service which it inaugurated stem directly from a long-standing popular demand, and the root-and-branch opponents have nothing on King Canute's sycophants. Constructive criticism, on the other hand, is to be encouraged, and mine is that the emphasis is far too much on the curative as against the preventive side of medicine. To my mind it is like fighting one's way through a forest fire to blow out a candle—to concentrate, as we are doing, on curative efforts for established ill-health, efforts which, in the nature of things, are only stop-gap and Palliative, while we ignore the basic causes of ninety per cent. of it, which are bad environment at home and at work, bad habits of living and, above all, faulty nutrition.

A second ,article in this series " Thought For Food" by Dr. A. P. Meiklejohn, of the Department of Medicine, Edinburgh University, will appear in next week's Spectator.