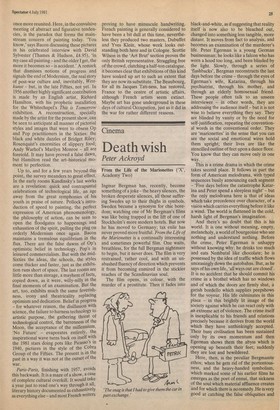 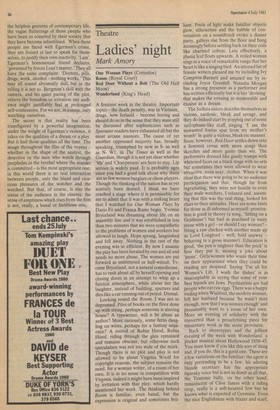 From the Life of the Marionettes ('X', Academy Two) Ingmar Bergman has, recently, become something of a joke the heavy silences, the broken desperate silences, all those suffering Swedes up to their thighs in symbols. Sweden became a synonym for chic boredom; watching one of Mr Bergman's films was like being trapped in the lift of one of Stockholm's more modern hotels. But now he has moved to Germany; tax exile has never proved more fruitful. From the Life of the Marionettes is a continually interesting and sometimes powerful film. One waits, breathless, for the full Bergman nightmare to begin, but it never does. The film is very restrained, rather cool, and with an unabashed fluency of direction which prevents it from becoming enmired in the stickier reaches of the Scandinavian soul.

The film opens, in colour, with the murder of a prostitute. Then it fades into black-and-white, as if suggesting that reality itself is now also to be bleached out, changed into something less tangible, more distant. It moves from fact to analysis, and becomes an examination of the murderer's life. Peter Egerman is a young German businessman; he looks like a falcon who has worn a hood too long, and been blinded by the light. Slowly, through a series of 'flashbacks', Bergman reconstructs the last days before the crime through the eyes of Egerman's wife, Katarina, through his psychiatrist, through his mother, and through an elderly homosexual friend. These people often talk to an unseen interviewer in other words, they are addressing the audience itself but it is not wise to believe everything they say. They are blinded by vanity or by the need for self-justification, repeating the conventional words in the conventional order. They are 'marionettes' in the sense that you can see the social and emotional wires hold them upright; their lives are like the stencilled outline of feet upon a dance floor. You know that they can move only in one way.

This is a crime drama in which the crime takes second place. It follows in part the form of American melodrama, with typed sequences busily announcing each segment 'Five days before the catastrophe KatarMa and Peter spend a sleepless night' but the only melodrama here is that of ideas which take precedence over character, of a vision which carries everything before it like a wind. The world is flattened in the cold, harsh light of Bergman's imagination.

And there's no doubt that this is his world. It is one without meaning, empty, melancholy, a world of bourgeoisie who see nothing and understand nothing. Before the crime, Peter Egerman is unhappy without knowing why; he drinks too much and eats Nembutal like chocolate; he is possessed by the idea of traffic which flows unceasingly down the autobahns. But, as he says of his own life, 'all ways out are closed'. It is no accident that he should commit his crime in a brothel which has no windows and of which the doors are firmly shut, a garish bordello which supplies peepshows for the voyeur. His life culminates in this place in this brightly lit image of the society against which he can react only with an extreme act of violence. The crime itself is inexplicable to his friends and relations precisely because it derives from the world which they have unthinkingly accepted. Their busy civilisation has been sustained only by its own momentum and then Egerman shows them the abyss which is opening up beneath their feet; suddenly they are lost and bewildered.

Here, then, is the peculiar Bergmanite ethos; when he gets rid of the portentousness, and the heavy-handed symbolism, which marked some of his earlier films he emerges as the poet of ennui, that sickness of the soul which material affluence creates and for which there is no remedy. He is very good at catching the false• obliquities and the helpless gestures of contemporary life the vague flutterings of those people who have been so cosseted by their society that they have become infantilised. When these people are faced with Egerman's crime, they are forced at last to speak for themselves, to justify their own inactivity. 'I am', Egerman's homosexual friend declares, 'governed by forces I can't master.' They all have the same complaint: 'Doctors, pills, drugs, work, alcohol — nothing works.' This may all sound abysmally dull, but in the telling it is not so. Bergman's skill with the camera, and his quiet pacing of the plot, relieve the boredom or irritation any audience might justifiably feel at prolonged self-confessions. For we are, in a sense, only watching ourselves.

The secret is that reality has been transfigured by a powerful imagination; under the weight of Egerman's violence, it takes on the qualities of a dream or a play. But it had those qualities all the time. The image throughout the film of the voyeur — whether in the shape of the analyst, the detective or the men who watch through peepholes in the brothel where the murder is committed — is the most appropriate one; in this world there is no real interaction between people, only the bland and vicarious pleasures of the watcher and the watched. But that, of course, is also the status of the audience in the cinema: the sense of emptiness which rises from the film is not, really, a banal or factitious one.