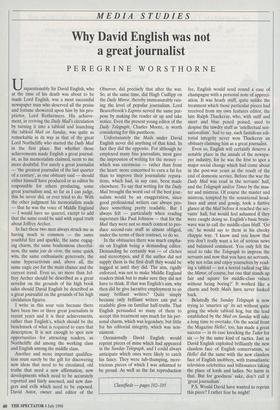 Why David English was not a great journalist

— 'the greatest journalist of the last quarter of a century', as one obituary said — should either himself have produced or as editor be responsible for others producing, some great journalism and, so far as I can judge, this he never did, or ever tried to do. With the other judgment his memorialists made — that he was the voice of Middle England — I would have no quarrel, except to add that the same could be said with equal truth about Jeffrey Archer.

I write in this sour vein because there have been two or three great journalists in recent years and it is their achievements, rather than English's, which should be the benchmark of what is required to earn that description. It is not enough to spot new opportunities for attracting readers, as Northcliffe did among the working class and English among the middle class.

Another and more important qualifica- tion must surely be the gift for discovering new ideas that need to be circulated, old truths that need a new affirmation, new developments which need to be accurately reported and fairly assessed, and new dan- gers and evils which need to be exposed. David Astor, owner and editor of the Observer, did precisely that after the war. So, at the same time, did Hugh Cudlipp on the Daily Mirror, thereby immeasurably rais- ing the level of popular journalism. Lord Beaverbrook's Express served the same pur- pose by making the reader sit up and take notice. Even the present young editor of the Daily Telegraph, Charles Moore, is worth considering for this pantheon.

Unfortunately the Mails under David English never did anything of that kind. In fact they did the opposite. For although he employed many fine journalists, most gave the impression of writing for the money which was enormous — rather than from the heart: more concerned to earn a fat fee than to improve their journalistic reputa- tions, which had, in any case, been made elsewhere. To say that writing for the Daily Mail brought the worst out of the best jour- nalists would be an exaggeration, since good professional writers can always pro- duce something pretty readable. But I always felt — particularly when reading superstars like Paul Johnson — that for the Mail they were not so much content to pro- duce second-rate stuff as almost obliged, under the terms of their contract, to do so.

In the obituaries there was much empha- sis on English being a demanding editor. Demanding he certainly was — of clichés and stereotypes, and if the author did not supply them in the first draft they would be nagged at until they did. The aim, rigidly enforced, was not to make Middle England readers think but to make sure they did not have to think. If that was English's aim, why then did he give lucrative employment to so many brilliant writers? Quite simply because only brilliant writers can put a readable gloss on familiar half-truths. That English persuaded so many of them to accept this treatment says much for his per- sonal charm, which was legendary, but little for his editorial integrity, which was non- existent.

Occasionally David English would reprint pieces of mine which had appeared in the Sunday Telegraph, and I could always anticipate which ones were likely to catch his fancy. They were tub-thumping, mere- tricious pieces of which I was ashamed to be proud. As well as the fat reproduction fee, English would send round a case of champagne with a personal note of appreci- ation. It was heady stuff, quite unlike the treatment which those particular pieces had received from my own features editor, the late Ralph Thackeray, who, with sniff and snort and blue pencil poised, used to despise the tawdry stuff as 'intellectual sen- sationalism'. Sad to say, such fastidious edi- torial integrity never won Thackeray an obituary claiming him as a great journalist.

Even so, English will certainly deserve a notable place in the annals of the newspa- per industry, for he was the first to spot a major social change which had come about in the post-war years as the result of the end of domestic service. Before the war the Daily Mail was read in the servants' hall, and the Telegraph and/or Times by the mas- ter and mistress. Of course the master and mistress, tempted by the sensational head- lines and smut and gossip, took a furtive glance at the Mail before it reached the ser- vants' hall, but would feel ashamed if they were caught doing so. English's basic brain- wave was to call the middle-class bluff. 'Go on,' he would say to them in his cheeky chappie way, 'I know and you know that you don't really want a lot of serious news and balanced comment. You only felt the need to take the Telegraph to impress the servants and now that you have no servants, why not relax and enjoy yourselves by read- ing a tabloid — not a horrid radical rag like the Mirror, of course, but one that stands up fair and square for middle-class values without being boring?' It worked like a charm and both Mails have never looked back.

Belatedly the Sunday Telegraph is now trying to 'smarten up' its act without quite going the whole tabloid hog, but the lead established by the Mail on Sunday will take a long time to overtake. On the social front the Magazine Hello!, too, has made a great success — in its case knocking the Taller for six — by the same kind of tactics. Just as David English exploited brilliantly the new classless face of English conservatism, so Hello! did the same with the new classless face of English snobbery, with transatlantic television celebrities and billionaires taking the place of lords and ladies. No harm in that. But for goodness' sake, don't call it `great journalism'.

P.S. Would David have wanted to reprint this piece? I rather fear he might!