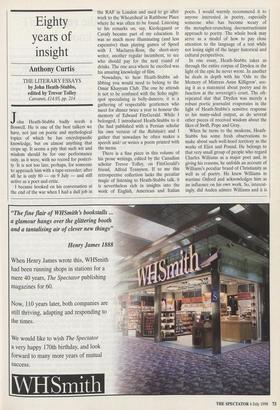 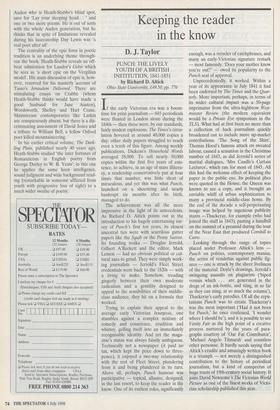 THE LITERARY ESSAYS by John Heath-Stubbs, edited by Trevor Tolley Carcanet, i14.95, pp. 214 John Heath-Stubbs badly needs a Boswell. He is one of the best talkers we have, not just on poetic and mythological topics of which he has encyclopaedic knowledge, but on almost anything that crops up. It seems a pity that such wit and wisdom should be for one performance only, as it were, with no record for posteri- ty. It is not too late, perhaps, for someone to approach him with a tape-recorder; after all he is only 80 — on 9 July — and still active as a poet and critic.

I became hooked on his conversation at the end of the war when I had a dull job in the RAF in London and used to go after work to the Wheatsheaf in Rathbone Place where he was often to be found. Listening to his remarks on, say, Kierkegaard or Cavafy became part of my education. It was so much more illuminating (and less expensive) than playing games of Spoof with J. Maclaren-Ross, the short-story writer, another regular incumbent, to see who should pay for the next round of drinks. The one area where he excelled was his amazing knowledge of film.

Nowadays, to hear Heath-Stubbs ad- libbing you would need to belong to the Omar Khayyam Club. The one he attends is not to be confused with the Soho night- spot specialising in belly-dancers; it is a gathering of respectable gentlemen who meet for dinner twice a year to honour the memory of Edward FitzGerald. While I belonged, I introduced Heath-Stubbs to it (he had published with a Persian scholar his own version of the RuInfiyat) and I gather that nowadays he often makes a speech and/ or writes a poem printed with the menu.

There is a fine piece in this volume of his prose writings, edited by the Canadian scholar Trevor Tolley, on FitzGerald's friend, Alfred Tennyson. If to me this retrospective collection lacks the peculiar magic of listening to Heath-Stubbs talk, it is nevertheless rich in insights into the work of English, American and Italian poets. I would warmly recommend it to anyone interested in poetry, especially someone who has become weary of the metaphor-crunching deconstructionist approach to poetry. The whole book may serve as a model of how to pay close attention to the language of a text while not losing sight of the larger historical and cultural perspectives.

In one essay, Heath-Stubbs takes us through the entire corpus of Dryden in the light of the epic he never wrote. In another he deals in depth with his 'Ode to the Memory of Mistress Anne Killigrew', see- ing it as a statement about poetry and its function at the sovereign's court. The oft- repeated slur that Dryden was merely a robust poetic journalist evaporates in the light of Heath-Stubbs's sensitive response to his many-sided output, as do several other pieces of received wisdom about the likes of Swift, Pope and Gray.

When he turns to the moderns, Heath- Stubbs has some fresh observations to make about such well-hoed territory as the works of Eliot and Pound. He belongs to that very small group of people who regard Charles Williams as a major poet and, in giving his reasons, he unfolds an account of Williams's peculiar brand of Christianity as well as of poetry. He knew Williams in wartime Oxford and acknowledges him as an influence on his own work. So, interest- ingly, did Auden admire Williams and it is Auden who is Heath-Stubbs's blind spot, save for 'Lay your sleeping head. . . ' and one or two more poems. He is out of sorts with the whole Auden generation, but he thinks that in spite of limitations revealed during his laureateship Day Lewis was 'a real poet after all'.

The centrality of the epic form in poetic tradition is an underlying theme through- out the book. Heath-Stubbs reveals an off- beat admiration for Landor's Gebir which he sees as 'a short epic on the Vergilian model'. His main discussion of epic is, how- ever, reserved for his masterly account of Tasso's Jerusalem Delivered. There are stimulating essays on Crabbe (whom Heath-Stubbs thinks would have made a good husband for Jane Austen), Wordsworth, Shelley and Hart Crane. Mainstream contemporaries like Larkin are conspicuously absent, but there is a dis- criminating assessment of David Jones and a tribute to William Bell, a fellow Oxford poet killed mountaineering.

In his earlier critical volume, The Dark- ling Plain, published nearly 40 years ago, Heath-Stubbs studied 'the later fortunes of Romanticism in English poetry from George Darley to W. B. Yeats'; in this one he applies the same keen intelligence, sound judgment and wide background read- ing (remarkable in someone afflicted from youth with progressive loss of sight) to a much wider swathe of poetry.