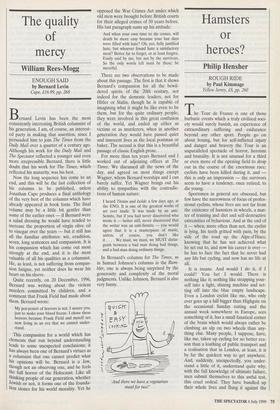 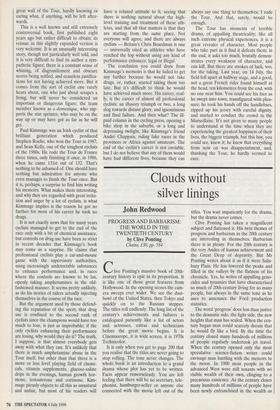 ROUGH RIDE by Paul Kimmage Yellow Jersey, £8, pp. 260 The Tour de France is one of those barbaric events which a truly civilised soci- ety would surely banish, an experience of extraordinary suffering and endurance beyond any other sport. People go on about boxing, but for self-inflicted injury and danger and bravery the Tour is an unparalleled spectacle of horror, heroism and brutality. It is not unusual for a third or even more of the opening field to drop out in the course of the enormous race; cyclists have been killed during it, and this is only an impression — the survivors seem to have a tendency, once retired, to die young.

Sportsmen in general are obsessed, but few have the narrowness of focus of profes- sional cyclists, whose lives are not far from the existence of hamsters in wheels, a mat- ter of training and diet and self-destructive extremities of behaviour. And at the end of it — when, more often than not, the cyclist is lying, his teeth gritted with pain, by the side of the road up the Alpe-d'Huez, knowing that he has not achieved what he set out to, and now his career is over he has to face the fact that he never had any life but cycling, and now has no life at all.

It is insane. And would I do it, if I could? You bet I would. There is nothing like it; nothing like strapping your- self into a light, shining machine and set- ting off into the blue empty landscape. Even a London cyclist like me, who only ever goes up a hill bigger than Highgate on the occasional Sunday outing and the annual week somewhere in Europe, sees something of it, has a small fanatical corner of the brain which would always rather be climbing an alp on two wheels than any- thing else. Many people, I suppose, have, like me, taken up cycling for no better rea- son than a loathing of public transport and a realisation that in London, at least, it is by far the quickest way to get anywhere. And, suddenly, unexpectedly, you under- stand a little of it, understand quite why, with the full knowledge of ultimate failure, men submit themselves to this awful test, this cruel ordeal. They have bundled up their whole lives and flung it against the great wall of the Tour, hardly knowing or caring what, if anything, will be left after- wards.

This is a well known and still extremely controversial book, first published eight years ago but rather difficult to obtain; its reissue in this slightly expanded version is very welcome. It is an unusually interesting story, though not particularly well told, and it is very difficult to find its author a sym- pathetic figure; there is a constant sense of whining, of disgruntlement and obscure scores being settled, and ceaseless justifica- tions for not having achieved more. But it comes from the sort of cyclist one rarely hears about, one who just about scrapes a living, but will never be considered an important or dangerous figure; the team member known as a domestique, who sup- ports the star sprinter, who may be on the way up or may have got as far as he will get.

Paul Kimmage was an Irish cyclist of that brilliant generation which produced Stephen Roche, who won the Tour in 1987, and Sean Kelly, one of the toughest cyclists of the 1980s. He rode the Tour de France three times, only finishing it once, in 1986, when he came 131st out of 132. That's nothing to be ashamed of. One should have nothing but admiration for anyone who even manages to finish the Tour once. But it is, perhaps, a surprise to find him writing his memoirs. What makes them interesting, and why they are regarded with great irrita- tion and anger by a lot of cyclists, is what Kimmage implies is the reason he got no further for most of his career he took no drugs.

It is not exactly news that for many years cyclists managed to get to the end of the race only with a bit of chemical assistance, but controls on drug use have been so strict in recent decades that Kimmage's book may come as a surprise. He claims that professional cyclists play a cat-and-mouse game with the supervisory authorities, using increasingly undetectable substances to enhance performance and, in races where the controls are known to be lax, openly taking amphetamines in the old- fashioned manner. It seems pretty unlikely, as do his stories of riders actually injecting themselves in the course of the race.

But the argument used by those defend- ing the reputation of the sport, that drug use is confined to the second rank of cyclists since the champions would have too much to lose, is just as improbable; if the only cyclists enhancing their performance are losing, why would they do it? The truth, I suppose, is that almost everybody gets away with what they can. It's unlikely that there is much amphetamine abuse in the Tour itself, but other than that there is a more or less level playing field of chemi- cals, vitamin supplements, glucose-saline drips in the evenings, human growth hor- mone, testosterone and cortisone. Kim- mage piously objects to all this as unnatural and unfair, but most of his readers will have a relaxed attitude to it, seeing that there is nothing natural about the high- level training and treatment of these ath- letes, and that all that matters is that they are starting from the same place. Not everyone will agree, and there are always cyclists — Britain's Chris Boardman is one — universally cited as athletes who have reached the top without using any kind of performance enhancer, legal or illegal.

The conclusion you could draw from Kimmage's memoirs is that he failed to get any further because he would not take drugs, or, rather, started taking them too late. But it's difficult to think he would have achieved much more. His career, real- ly, is the career of almost all professional cyclists: an illusory triumph or two, a long slog towards distant glory, and ignominious and final failure. And then what? The ill- paid column in the cycling press, opening a bike shop in the suburbs, or a long and depressing twilight, like Kimmage's friend Andre Chappuis, riding fake races in the provinces or Africa against amateurs. The end of the cyclist's career is not enviable, but I do not believe that any of them would have had different lives, because they can always say one thing to themselves: I rode the Tour. And that, surely, would be enough.

The Tour has moments of terrible drama, of appalling theatricality; like all such extreme physical experiences, it is a great revealer of character. Most people who take part in it find it defeats them; in the end, it asks too much, brutally demon- strates every weakness of character, and can kill. But there are strokes of luck, too, for the taking. Last year, on 14 July, the field fell apart at halfway stage, and a good, not a great French rider found himself at the head, ten kilometres from the end, with no one near him. You could see his face as he swept into town, transfigured with plea- sure; he took his hands off the handlebars, zipped up his jersey with careful dignity, and started to conduct the crowd in the Marseillaise. It's not given to many people to understand at the time when they are experiencing the greatest happiness of their lives, the biggest triumph, but this boy, you could see, knew it; he knew that everything from now on was disappointment, and, thanking the Tour, he hardly seemed to care.