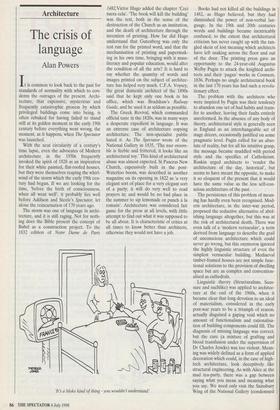 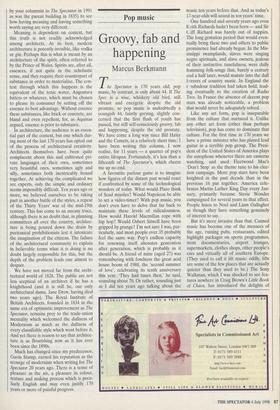 The crisis of language

It is common to look back to the past for standards of normality with which to con- demn the outrages of the present. Archi- tecture, that expensive, mysterious and frequently catastrophic process by which privileged buildings come into being, is often rebuked for having failed to stand still at its golden moment in the early 19th century before everything went wrong, the moment, as it happens, when The Spectator was launched.

With the neat circularity of a century's time lapse, even the advocates of Modern architecture in the 1930s frequently invoked the spirit of 1828 as an inspiration for their white painted, flat-roofed houses, but they were themselves reaping the whirl- wind of the storm which the early 19th cen- tury had begun. If we are looking for the time, 'before the birth of consciousness, when all went well', it probably lies well before Addison and Steele's Spectator, let alone the reincarnation of 170 years ago.

The storm was one of language in archi- tecture, and it is still raging. Not for noth- ing does the Bible present the concept of Babel as a construction project. To the 1832 edition of Notre Dame de Paris 1482, Victor Hugo added the chapter `Ceci tuera cela'. 'The book will kill the building' was the text, both in the sense of the destruction of the Church as an institution, and the death of architecture through the invention of printing. How far did Hugo understand that Gutenberg was only the test run for the printed word, and that the mechanisation of printing and papermak- ing in his own time, bringing with it mass- literacy and popular education, would alter the condition of all the arts? It is hard to say whether the quantity of words and images printed on the subject of architec- ture has helped very much. C.F.A. Voysey, the great domestic architect of the 1890s said that he kept only one book in his office, which was Bradshaw's Railway Guide, and he used it as seldom as possible.

The Greek Revival, which commanded official taste in the 1820s, was in many ways a desperate expedient in language. It was an extreme case of architecture copying architecture. The non-specialist public hated it. As The Spectator wrote of the National Gallery in 1835, 'The tout ensem- ble is feeble and frittered, it looks like an architectural toy.' This kind of architectural abuse was almost expected. St Pancras New Church, expensively built in the post- Waterloo boom, was described in another magazine on its opening in 1822 as `a very elegant sort of place for a very elegant sort of a party; it will do very well to read prayers in; and would be no bad place in the summer to sip lemonade or punch a la romain'. Architecture was considered fair game for the press at all levels, with little attempt to find out what it was supposed to be all about. It is characteristic of critics at all times to know better than architects, otherwise they would not have a job.

`Its a bloke kind of thing - you wouldn't understand' Books had not killed all the buildings in 1482, as Hugo believed, but they had diminished the power of non-verbal lan- guage. In the 19th and 20th centuries words and buildings became inextricably confused, to the extent that architectural criticism has never caught up with the tan- gled skein of lost meaning which architects have left snaking across the floor and out of the door. The printing press gave an opportunity to the 24-year-old Augustus Welby Pugin to attack the knighted archi- tects and their 'pagan' works in Contrasts, 1836. Perhaps no single architectural book in the last 170 years has had such a revolu- tionary effect.

The problem with the architects who were inspired by Pugin was their tendency to abandon one set of bad habits and trans- fer to another, leaving their faults entirely unreformed. In the absence of any body of theory, architectural style is generally seen in England as an interchangeable set of stage decors, occasionally justified on some pragmatic level. Pugin called for an abso- lute of reality, but for all his intuitive grasp, the message became muddled with period style and the specifics of Catholicism. Ruskin urged architects to 'render the architecture of the day, historical', but seems to have meant the opposite, to make it so eloquent of the present that it would have the same value as the less self-con- scious architecture of the past.

The persistence of this problem of mean- ing has hardly even been recognised. Mod- ern architecture, in the inter-war period, proposed the seductive alternative of abol- ishing language altogether, but this was at the risk of architectural death. There was even talk of a 'modern vernacular', a term derived from language to describe the grail of unconscious architecture which could never go wrong, but this oxymoron ignored the highly linguistic structure of even the simplest vernacular building. Mediaeval timber-framed houses are not simple func- tional solutions to the provision of dwelling space but are as complex and convention- alised as cathedrals.

Linguistic theory (Structuralism, Saus- sure and suchlike) was applied to architec- ture at the end of the 1960s, when it became clear that long devotion to an ideal of materialism, considered in the early post-war years to be a triumph of reason, actually disguised a gaping void which no amount of functionalism and rationalisa- tion of building components could fill. The diagnosis of missing language was correct, but the cure (a mixture of grafting and blood transfusion under the supervision of Dr Charles Jencks) was too violent. Mean- ing was widely defined as a form of applied decoration which could, in the case of high- tech architecture, look deceptively like structural engineering. As with Alice at the mad tea-party, there was a gap between saying what you mean and meaning what you say. We need only visit the Sainsbury Wing of the National Gallery (condemned by your columnist in The Spectator in 1991 as was the parent building in 1835) to see how having meaning and having something worth saying are very different.

Meaning is dependent on context, but this truth is not readily acknowledged among architects. At its best, modern architecture is potently invisible, like vodka or gin. Perhaps this is what is meant by an architecture of the spirit, often referred to by the Prince of Wales. Spirits are, after all, essences, if not quite in the scholastic sense, and they require their counterpart of substance in order to materialise. The con- text through which this happens is the equivalent of the tonic water, Angostura bitters or whatever, which must be chosen to please its consumer by setting off the essence to best advantage. Without essence these substances, like brick or concrete, are bland and even repellent, for, as Aquinas argued, essence is prior to substance.

In architecture, the audience is an essen- tial part of the context, but one which dur- ing most of the last 170 years has opted out of the process of architectural creativity. Architects themselves have been quite complacent about this and cultivated pri- vate languages of their own, sometimes very beautiful ones, sometimes ugly and silly, sometimes both inextricably bound together. At achieving the complicated we are experts, only the simple and ordinary seems impossibly difficult. Ten years ago or more, we believed ourselves to be taking part in another battle of the styles, a repeat of the Thirty Years' war of the mid-19th century. This has come to an uneasy truce, although there is no doubt that, in planning committees all over the country, architec- ture is being poured down the drain by puritanical prohibitionists lest it intoxicate the imagination of the citizens. The failure of the architectural community to explain in believable terms what it is doing is no doubt largely responsible for this, but the depth of the problem leads one almost to despair.

We have not moved far from the archi- tectural world of 1828. The public are not less sceptical of an architect if he has a knighthood (and it is still he, our only architectural dame, Jane Drew, having died two years ago). The Royal Institute of British Architects, founded in 1834 in the same era of optimistic improvement as The Spectator, remains prey to the trade-union mentality which welcomed the dullness of Modernism as much as the dullness of every classifiable style which went before it. And yet there is reason to say that architec- ture is as flourishing' now as it has ever been since the 1890s.

Much has changed since my predecessor, Gavin Stamp, earned his reputation as the scourge of modernists when writing for The Spectator 20 years ago. There is a sense of pleasure in the air, a pleasure in colour, texture and making process which is pecu- liarly English and may even justify 170 years or more of painful progress.