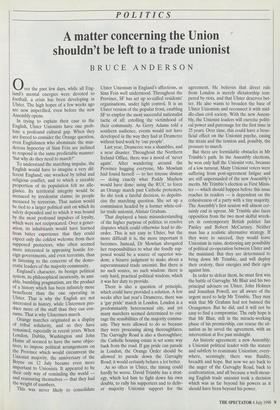 Over the past few days, while all Eng- land's mental energies were devoted to football, a crisis has been developing in Ulster. The high hopes of a few weeks ago are now imperilled, even before the new Assembly opens. In trying to explain their case to the English, Ulster Unionists have one prob- lem: a profound cultural gap. When they are forced to consider the Orange question, even Englishmen who abominate the mur- derous hypocrisy of Sinn Fein are inclined to respond in the same predictable manner: `but why do they need to march?' To understand the marching impulse, the English would have to imagine a very dif- ferent England; one wracked by tribal and religious conflict, and to which a sizeable proportion of its population felt no alle- giance. Its territorial integrity would be menaced by irredentist claims; its people menaced by terrorism. That nation would be tied to a larger political unit on which its safety depended and to which it was bound by the most profound impulses of loyalty, which were not reciprocated. Over a gener- ation, its inhabitants would have learned from bitter experience that they could expect only the coldest welcome from their supposed protectors, who often seemed more interested in appeasing hostile for- eign governments, and even terrorists, than in listening to the concerns of the demo- cratic leaders of the majority community. England's character, its benign political system, its philosophical incuriosity, its ami- able, bumbling pragmatism, are the product of a history which has been infmitely more beneficent than the one operating in Ulster. That is why the English are not interested in history, while Ulstermen pro- duce more of the stuff than they can con- sume. That is why Ulstermen march. Orange marches originated as a display of tribal solidarity, and so they have remained, especially in recent years. When London, Dublin, Washington and John Hume all seemed to have the same objec- tives, to impose political arrangements on the Province which would circumvent the Unionist majority, the anniversary of the Boyne on 12 July became even more important to Unionists. It appeared to be their only way of reminding the world and reassuring themselves — that they had the weight of numbers.

This was never likely to consolidate Ulster Unionism in England's affections, as Sinn Fein well understood. Throughout the Province, SF has set up so-called residents' organisations, under tight control. It is an Ulster version of the popular front, enabling SF to employ the most successful nationalist tactic of all: extolling the victimhood of their community. As Gerry Adams told a southern audience, events would not have developed in the way they had at Drumcree without hard work by 'our people'.

Last year, Drumcree was a shambles, and a near disaster. Throughout the Northern Ireland Office, there was a mood of 'never again'. After wandering around the Province hugging everyone, Mo Mowlam had found herself — to her intense dismay — doing exactly what Paddy Mayhew would have done: using the RUC to force an Orange march past Catholic protesters. So she took a fateful decision, to depoliti- cise the marching question. She set up a commission headed by a former white-col- lar trade unionist, Alistair Graham.

That displayed a basic misunderstanding of the higher purpose of politics: to resolve disputes which could otherwise lead to dis- order. This is not easy in Ulster, but the more difficult it is, the more important it becomes. Instead, Dr Mowlam abrogated her responsibilities to what she fondly sup- posed would be a source of superior wis- dom; a bizarre judgment to make about a superannuated trade unionist. But there is no such source, no such wisdom: there is only hard, practical political wisdom, which it was her duty to provide.

There is also a question of principle, which could have provided a solution. A few weeks after last year's Drumcree, there was a 'gay pride' march in London. London is a predominantly heterosexual city, and yet many marchers seemed determined to out- rage the sensibilities of the majority commu- nity. They were allowed to do so because they were processing along thoroughfares. The Garvaghy Road is also a thoroughfare; the Catholic housing estate is set some way back from the road. If gay pride can parade in London, the Orange Order should be allowed to parade down the Garvaghy Road; it would certainly behave a lot better.

As so often in Ulster, the timing could hardly be worse. David Trimble has a strat- egy, which led him to fight down his own doubts, to rally his supporters and to deliv- er majority Unionist support for the agreement. He believes that direct rule from London is merely dictatorship tem- pered by riots, and that Ulster deserves bet- ter. He also wants to broaden the base of Ulster Unionism and reconnect it with mid- dle-class civil society. With the new Assem- bly, the Unionist leaders will exercise politi- cal power and patronage for the first time in 25 years. Over time, this could have a bene- ficial effect on the Unionist psyche, easing the strain and the tension and, possibly, the pressure to march.

But there are formidable obstacles in Mr Trimble's path. In the Assembly elections, he won only half the Unionist vote, because of a low turnout. Many Unionist voters were suffering from post-agreement fatigue and are still unpersuaded of the new Assembly's merits. Mr Trimble's election as First Minis- ter — which should happen before this issue reaches its readers — is dependent on the cohesiveness of a party with a tiny majority. The Assembly's first session will almost cer- tainly end in uproar. Mr Trimble also faces opposition from the two most skilful wreck- ers in contemporary British politics: Ian Paisley and Robert McCartney. Neither man has a realistic alternative strategy. If they were to succeed, they would leave Unionism in ruins, destroying any possibility of political co-operation between Ulster and the mainland. But they are determined to bring down Mr Trimble, and will deploy their oratory, their energies and their egos against him.

In order to defeat them, he must first win the battle of Garvaghy. Mr Blair and his two principal advisers on Ulster, John Holmes and Jonathan Powell, are all aware of the urgent need to help Mr Trimble. They may wish that Mr Graham had not banned the Orangemen. But he did, and it will not be easy to find a compromise. The only hope is that Mr Blair, still in the miracle-working phase of his premiership, can rescue the sit- uation as he saved the agreement, with an intervention at five past midnight.

An historic agreement; a new Assembly; a Unionist political leader with the stature and subtlety to reanimate Unionism; every- where, seemingly, there was fluidity, breadth and hope. But now we are back to the anger of the Garvaghy Road, back to confrontation, and all because a well-mean- ing English trade unionist took a decision which was as far beyond his powers as it should have been beyond his power.