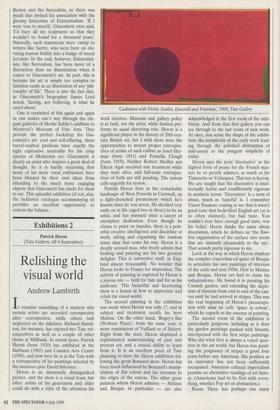 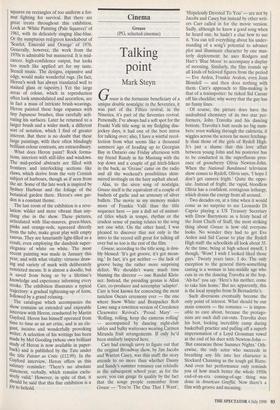 It remains something of a mystery why certain artists are accorded retrospective after retrospective, while others lurk neglected on the sidelines. Richard Hamil- ton, for instance, has enjoyed two Tate ret- rospectives as well as a couple of other shows at Millbank. In recent years, Patrick Heron (born 1920) has exhibited at the Barbican (1985) and Camden Arts Centre (1994), and now here he is at the Tate with a retrospective of his paintings selected by the eminence vise David Sylvester.

Heron is an immensely distinguished painter, and the show is a visual feast, but other artists of his generation and older could do with a tithe of the attention his `Cadmium with Violet, Scarlet, Emerald and Venetian, 1969, Tate Gallery work receives. Museum and gallery policy is at fault, not the artist, while fashion per- forms its usual distorting role. Heron is a significant player in the history of 20th-cen- tury British art, but I wish there were the opportunities to mount proper retrospec- tives of artists of such calibre as Josef Her- man (born 1911) and Prunella Clough (born 1919). Neither Robert Medley nor Eileen Agar received star treatment while they were alive, and full-scale retrospec- tives of both are still pending. The system calls urgently for review.

Patrick Heron lives in the remarkable landscape of West Penwith in Cornwall, on a light-drenched promontory which he's known since he was seven. He decided very early on in life (aged two or three) to be an artist, and has pursued since a career of exemplary dedication. Even though he claims to paint on impulse, there is a pow- erful creative intelligence and discipline at work, sifting and organising the random sense data that come his way. Heron is a deeply sensual man, who freely admits that looking and painting are his two greatest delights. This is subversive stuff, in Eng- land almost treasonable. No wonder that Heron looks to France for inspiration. The activity of painting as explored by Heron is a joyous one — both for him and for us his audience. This beautiful and heartening show is a lesson in how to appreciate and relish the visual world.

The second painting in the exhibition was made when Heron was only 17, and in subject and treatment recalls his hero Matisse. On the other hand, 'Bogey's Bar (Woburn Place)', from the same year, is more reminiscent of Vuillard or of Sickert. Right from the start, Heron displayed a sophisticated understanding of past and present art, and a crucial ability to learn from it. It is an excellent piece of Tate planning to have the Heron exhibition fol- lowing the great Bonnard show. Heron has been much influenced by Bonnard's manip- ulation of flat colour and his recourse to the edges of the canvas. The other great painters whom Heron admires — Matisse and Braque in particular — are also acknowledged in the first room of the exhi- bition. And from that first gallery you can see through to the last room of new work. At once, you sense the shape of the exhibi- tion: the complexity of the early work lead- ing through the polished abstraction of mid-career to the pungent simplicity of today.

Heron uses the term 'decorative' as the highest form of praise for the French mas- ters he so greatly admires, as much as for Tintoretto or Velazquez. This too is heresy. We are taught that the decorative is intel- lectually feeble and insufficiently rigorous in aesthetic terms. 'Decorative' is a term of abuse, much as 'tasteful' is. I remember Victor Pasmore roaring at me that it wasn't good taste that bedevilled English art (as is so often claimed), but bad taste. You couldn't ever have enough good taste, was his belief. Heron thinks the same about decoration, which he defines as 'the flaw- less organisation of the surface into terms that are instantly pleasurable to the eye'. That sounds pretty rigorous to me.

Look at the way in which Heron employs the complex concertina-ed space of Braque to articulate his own paintings of interiors of the early and mid-1950s. Heir to Matisse and Braque, Heron yet had to claim his independence. He found it in painting his Cornish garden, and extending the depic- tion of blossom from end to end of the can- vas until he had arrived at stripes. This was the real beginning of Heron's preoccupa- tion with what he calls 'space in colour', which he regards as the essence of painting.

The second room of the exhibition is particularly gorgeous, including as it does the garden paintings packed with blooms, interspersed with the first stripe paintings. Who did what first is always a vexed ques- tion in the art world, but Heron was paint- ing the poignancy of stripes a good four years before any American. His position as an innovator has not been sufficiently recognised: American cultural imperialisni permits no alternative readings of art histo- ry. (Americans had to be first with every- thing, whether Pop art or abstraction.) Room Three has perhaps too many squares on rectangles of too uniform a for- mat fighting for survival. But there are great treats throughout this exhibition. Look at 'White Painting (Pale Squares)' of 1961, with its delicately singing lilac-blue. Or the sumptuous red/green knockabout of `Scarlet, Emerald and Orange' of 1976. Generally, however, the work from the 1970s is admirable but mannered. It is mid- career, high-confidence output, but looks too much like applied art for my taste. Stencil music. The designs, expansive and edgy, would make wonderful rugs. (In fact, Heron's work has always translated well to stained glass or tapestry.) Yet the large areas of colour, which in reproduction often look unmodulated and accentless, are in fact a mass of intricate brush-weavings. Heron painted these huge expanses with tiny Japanese brushes, thus carefully acti- vating his surfaces. Later he returned to a larger brush and a wider mark, a different sort of notation, which I find of greater interest. But there is no doubt that these large paintings, with their often blindingly brilliant colour contrasts, are extraordinary.

What does Heron paint? Rock forma- tions, interiors with still-lifes and windows. The mid-period abstracts are filled with frontiers and interlocking sections like claws, which derive from the very Cornish subject of harbours, though as if seen from the air. Some of the late work is inspired by Sydney Harbour and the foliage of the botanical garden there. Heron's own gar- den is a constant theme.

The last room of the exhibition is a reve- lation: wilder and more vibrant than any- thing else in the show. These pictures, articulated with lilac-mauves, green-blues, Pinks and orange-reds, squeezed directly from the tube, make great play with empty canvas. They are luxuriantly light-filled as a result, even employing the dandyish super- elegance of white on white. The most recent painting was made in January this year, and with what vitality: virtuoso draw- ing and variety of mark with deliberately restricted means. It is almost a doodle, but is saved from being so by a lifetime's knowledge and experience informing every stroke. The exhibition illustrates a typical trajectory: a gradual tightening-up. of form, followed by a grand relaxing. The catalogue which accompanies the show contains an extended and enjoyable interview with Heron, conducted by Martin Gaylord. Heron has himself operated from time to time as an art critic, and is an ele- gant, incisive and wonderfully provoking writer. A selection of his writings has been made by Mel Gooding (whose own brilliant study of Heron is now available in paper- back) and is published by the Tate under the title Painter as Critic (£12.99). In the Gaylord interview, Heron offers us this salutary reminder: 'There's no absolute statement, verbally, which remains exclu- sively valid.' However, in spite of that, it should be said that this fine exhibition is a Joy to behold.