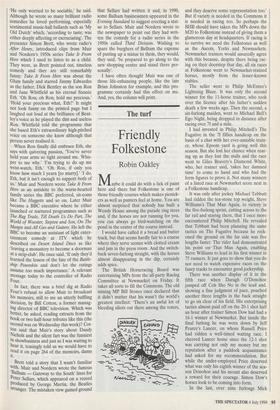 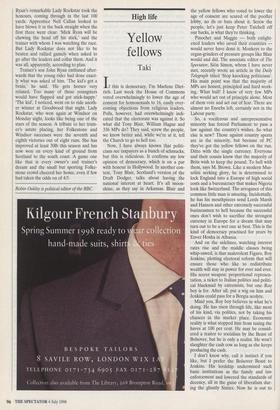 Maybe it could do with a lick of paint here and there but Folkestone is one of those friendly courses which makes picnick- ers as well as punters feel at home. You are almost surprised that nobody has built a Wendy House among the parade ring trees and, if the horses are not running for you, you can always go bird-watching on the pond in the centre of the course instead.

I would have called it a bread and butter track, but that seems hardly fair to a course where they serve scones with clotted cream and jam in the press room. And the switch- back seven-furlong straight, with the horses almost disappearing in the dip, certainly adds spice.

The British Horseracing Board was entertaining MPs from the all-party Racing Committee at Newmarket on Friday. It takes all sorts to fill the Commons. The old mining MP Bill Stones once declared that it didn't matter that his wasn't the world's greatest intellect: 'There's an awful lot of bleeding idiots out there among the voters, and they deserve some representation too.' But if variety is needed in the Commons it is needed in racing too. So perhaps the BHB should have taken the MPs down the M20 to Folkestone instead of giving them a glamorous day at headquarters. If racing is to survive we need the Folkstones as well as the Ascots, Yorks and Newmarkets. Newmarket trainers would assuredly agree with this because, despite there being rac- ing on their doorstep that day, all six races at Folkestone went to Newmarket-trained horses, mostly from the lesser-known stables.

The seller went to Philip McEntee's Lightning Blaze. It was only the second winner for the 11-horse trainer, who took over the licence after his father's sudden death a few weeks ago. Then the second, a six-furlong maiden, went to Michael Bell's Ego Night, being dropped in distance after racing over 7f and a mile.

I had invested in Philip Mitchell's The Fugative in the 7f fillies handicap on the basis of a chat with her ever-amiable train- er, whose Epsom yard is going well this season. But she lost her chance when rear- ing up as they lost the stalls and the race went to Giles Bravery's Diamond White, who, her trainer said, 'takes her damned time' to come to hand and who had the form figures to prove it. Not many winners of a listed race at Newmarket score next in a Folkestone handicap.

It was only after jockey Michael Tebbutt had ridden the ten-stone top weight, Steve Williams's That Man Again, to victory in the five-furlong sprint, cutting across to the far rail and staying there, that I once more encountered Philip Mitchell. He revealed that Tebbutt had been planning the same tactics on The Fugative because he reck- oned the ground on the far side was five lengths faster. The rider had demonstrated his point on • That Man Again, enabling Steve Williams to lead in his first winner in 75 runners. It just goes to show that you do not need to watch expensive races on the fancy tracks to encounter good jockeyship.

There was another display of it in the fifth race when Daragh O'Donohoe jumped off Coh Sho No in the lead and, showing a fine judgment of pace, poached another three lengths in the back straight to go six clear of his field. His enterprising tactics almost paid off on the 20-1 shot half an hour after trainer Simon Dow had had a 16-1 winner at Newmarket. But inside the final furlong he was worn down by Jeff Pearce's Lancer, on whom Russell Price had ridden a well-timed waiting race. I cheered Lancer home since the 12-1 shot was carrying not only my money but my reputation after a paddock acquaintance had asked for my recommendation. But while the under-employed Price deserved what was only his eighth winner of the sea- son Donohoe and his mount also deserved a reward for their courage. Simon Dow's horses look to be coming into form.

In the last, over nine furlongs Mick Ryan's remarkable Lady Rockstar took the honours, coming through in the last 100 yards. Apprentice Neil Callan looked to have blown it in the back straight when the first three went clear. 'Mick Ryan will be chewing the head off his stick,' said the trainer with whom I was watching the race. But Lady Rockstar does not like to be beaten and rallied gamely when asked to go after the leaders and collar them. And it was all, apparently, according to plan.

Trainer's son John Ryan enthused after- wards that the young rider had done exact- ly what was asked of him. The kid's got a brain,' he said. 'He gets horses very relaxed. Too many of these youngsters would have flapped and got stick-happy.' `The kid', I noticed, went on to ride anoth- er winner at Goodwood that night. Lady Rockstar, who won again .at Windsor on Monday night, looks like being one of the stars of the season. A tribute to her train- er's astute placing, her Folkestone and Windsor successes were the seventh and eighth victories out of eight runs. She has improved at least 30lb this season and has now won on every kind of ground from Scotland to the south coast. A game one like that is every owner's and trainer's dream and the small but sporting Folke- stone crowd cheered her home, even if few had taken the odds on of 4/5.