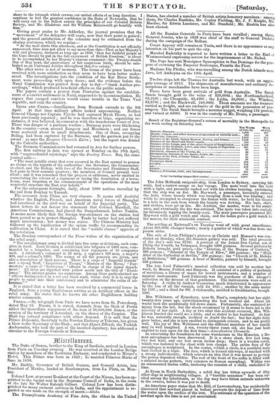 The Duke of Genoa, brother to the King of Sardinia, arrived in London from Paris on. Tuesday evening. He was received at the London Bridge station by members of the Sardinian Embassy, and conducted to Mivart's Hotel. This Prince was born in 1822; he married Princess Marie of Saxe in 1850.

Colonel Low, at present Resident at the Court of the Nizam, has been ap- pointed to the vacant seat in the Supreme Council of India, in the room of the late Sir Walter Raleigh Gilbert. Colonel Low has been distin- guished for many eminent services in India, and the appointment is re- garded as one made on the strength of merit. —Globe.

The Pennsylvania Academy of Fine Arts, the oldest in the United

All the Russian Generals in Paris have been recalled ; among them, General Jomini, who in 1828 was chief of the staff to General 1".liebitz during the campaign of the Balkan.

Count Appony still remains at Turin, and there is no appearance or any intention on his part to quit the city.

Marshal Radetzky is reported to have written a letter to the Earl of Westmoreland expressing sorrow for the imprisonment of Mr. Sichel.

The Pope has sent Monsignor Spaccapietra to San Domingo for the pur- pose of crowning the Emperor Soulouque, Faustin the First.

Madame Ida Pfeifer, who was travelling among the Dutch islands near Java, left Amboyna on the 13th April.

Twelve ships left the Thames for Australia last week, with an aggre- gate tonnage of 6912. The shipments of manufactures and ordinary de- scriptions of merchandise have been large.

Result of the Registrar-General's return of mortality in the Metropolis for the week ending on Saturday last.

Diseases of the Kidneys, itc 90

Childbirth, diseases of the Uterus, he 90

Rheumatism, diseases of the Bones, Joints, Am 87

Diseases of the Skin, Cellular Tissue, Am 20

The John Melhuish emigrant-ship, from London to Sydney, carrying 240 souls, had a narrow escape on her voyage. The mate went into the hold with a light, and presently rushed out with his clothes burning, exclaiming that the ship was on fire. Mr. Hayward, a passenger, heroically entered the hold, where brandy which was escaping from a call was blazing ; and while he attempted to overpower the flames with water, he held his thumb to a hole in the cask from which the brandy was flowing. His hair, shirt, and clothes, were set on fire. Mr. Jenkins, the master, went to his assist- ance, and eventually the fire was subdued. The mate was taken into custody for feloniously tapping the brandy-cask. The male passengers presented Mr. Hayward with a gold watch and chain' and the ladies gave a gold watch to the master, for their admirable conduct.

The settling at Tattersall's on Tuesday went off with great smoothness. About 500,000/. changed hands ; nearly a quarter of which was due from one person alone.

The sale of Louis Philippe's pictures at Christie and Manson's was con- cluded on Monday, when the Standish gallery was sold. The total proceeds of the day's Bale was 6724/. A portrait of the Infant Don Carlos, son of Philip the Fourth, by Velssquez, brought 1600 guineas. Several pictures by Roberts brought good pnees,—the "Interior, of the Mosque of Cordova," 300 guineas ; "Interior of the Temple of Efew," 360 guineas ; the "High Altar of the Cathedral at Seville," 300 guineas ; the "Church of St. Helena at Bethlehem," 460 guineas. A head of hfurillo, painted by himself, brought 330 guineas.

The late Lord Falmouth's musical collection was sold by auction last week, by Messrs. Puttick and Simpson. It consisted of a gallery of portraits of musicians, a library of music for bowed instruments, and a number of musical instruments. Lord Falmouth was the purchaser of Mr. Alsagees collection on the decease of that gentleman. The instruments were sold on Saturday. A violin by Andrew Guanerius, much deteriorated in appearance by the loss of all the varnish, sold for 101/. ; another by the same maker for 1104 A ; and a third for 90/. violoncello, ascribed to Stradinarius, brough 110/.

Mrs. Wilkinson, of Eynesbury, near St. Neot's, completely lost her sight twenty-five years ago, notwithstanding the best medical aid. About six weeks back she accidentally fell down stairs. Fortunately, she sustained no injury from the fall, but the shock occasioned by it seems to have led to the recovery of her sight. A day or two after this accident occurred, Mrs. Wil- kinson fancied she could see a little, and so stated to her husband. At first he was, naturally enough, inclined to doubt the fact ; but her sight daily grew better, and she is now enabled to distinguish colours, and to see pretty well. The joy of Mrs. Wilkinson and the different members of her family may be well imagined. A son, twenty-three years old, she has just been enabled to look upon for the first time.—Lincolnshire Chronicle.

In excavating the foundation for some warehouses in the Minories, a Ro-

man sarcophagus has been discovered. It is a stone chest, five feet long, two feet wide, and one foot seven inches deep ; there is a wooden cover, which was fastened to the chest with iron clamps. The entire face of the sarcophagus is sculptured. In the centre, within a circle, is a youthful male bust clothed in a tunic. The face, which is turned sideways, is marked with a strong individuality, which conveys an idea that it was meant to portray the person deposited within. The rest of the front of the coffin is filled with a striated incuse pattern, very common on Roman sarcophagi. Within was an ornamented leaden coffin, enclosing the remains of a child, embedded in lime.

At Eyam in North Derbyshire, a rabid dog has bitten upwards of fifty other dogs in neighbouring villages. A "horrible sensation " has been ex- cited among the inhabitants, as the dog may have bitten animals unknown to the owners, before it was put to death. An American paper states that Mr. Hill, of Lawrenceburg, has accidentally discovered that sawdust placed in boilers prevents the deposit of lime from the water upon the surface of the iron. The rationale of the operation of the sawdust upon the lime is not yet ascertained.