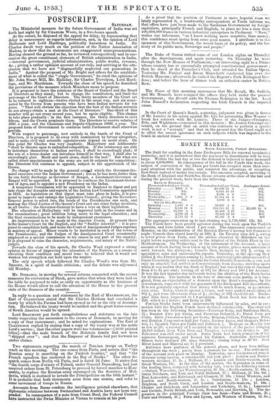 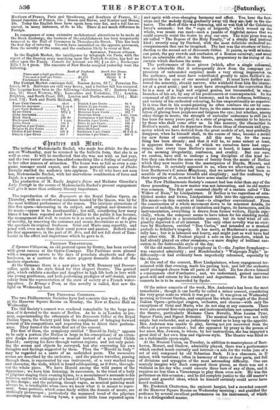 The limit for sending in the June Exchequer Bills for renewal terminated yesterday, and it is understood that the payment to dissentients will be very large. Within the last day or two the demand is believed to have increased to about 3,000,000/. In consequence of the fall in the Funds this week, the subject of conversion of the Three per Cents has occupied more than ordi- nary attention with the public, and rendered the advantage of accepting New Stock instead of money less certain. The amounts accepted, according to the Bank of England and South Sea House returns atthe close of the last and during the present week, have been the following.

The aggregate conversion up to last evening was 2,738,6861. 12s. 8d. The Funds have been greatly agitated during the week upon the Turkish question, and have fallen about 1 per cent. The depression commenced on

Monday, on the confirmation of the Russian Envoy's having left Constanti- nople: Consols then closed heavily at 1001 a. On Tuesday they fell I, owing to lower prices from Paris, and the silence observed by Ministers on the night before regarding orders sent to the Admiral of the British Fleet in the Mediterranean. On Wednesday, at the settlement of the Account, a large amount of Stock having been taken up by the public, prices were maintained until towards the afternoon ; Consols then declined to 991 f, owing to speculative sales and unfavourable reports. Yesterday, at the opening they rallied 1, the French prices coming li better, and telegraphic information that Count Nesselrode [probably a mistake for Count DimitriNesselrode, a son, and only an attache] had arrived at Constantinople from Russia ; receding again when it was known that the Bank of England had raised the rate of discount from 3 to 31- per cent; leaving off at 99,1 for Money and 100 for Account. It was the last transfer-day in Consols before the shutting of the Bank-books for Dividends. The increase in the rate of discount arose partly, it is ima- gined, from an expectation of a demand upon the Bank's resources, by the Government, connected with the payment of the Exchequer Bill dissentients. It is not generally expected that money will be much dearer, or inconveni- ence arise. Today, Consols opened ti lower, and were quoted ex-dividend at 981 1, and were afterwards done at 1 ; closing at 98a ex-dividend. Exche- quer Bills have improved to 1 4 premium. Bank Stock has been doue at 229, which is lower ; and India at 260.

Foreign Stocks have been unfavourably influenced by sales, and in con- nexion with the English Funds have declined considerably. The chief full has been in the following Securities-Peruvian Scrip, and Sardinian Stock, ; Russian Five per Cents, and Peruvian Deferred, 2; Dutch Four per Cents, Ditto Two-and-a-half per Cents, Belgian, Chilian, Portuguese Four, and Russian Four-and-a-half per Cents, Buenos Ayres, and Granada Defer- red, 1; Spanish Three per Cents and Deferred, 1. Mexican on Monday a as as low as 26; a recovery of 1 occurred on the arrival of the packet bringing 48,915 dollars from Vera Cruz and Tampico, towards the dividends. Mr. Falconnet was still under arrest. Santa Anna had taken possession of the supreme Government, and formed his Cabinet. Australian Agricultural Shares have declined 10/. since Saturday ; closing today at 59 81. Peel River Land and Mineral are 11 f premium. Railways have partaken of the general gloom, and have been falling throughout the week ; partly from a pressure for money. The settlement, of the Account took place on Monday. Yesterday, upon the increased rate of discount being known, a considerable fall took place : London and North- western declined 11. 53. ; Midland, 1/. ; London and South-western, and Great Western, 10s. At the close of the market, the depression in some of the leading lines, compared with Saturday last, was to the following extent -Oxford, Worcester, and Wolverhampton, 51. 10s. ; South-eastern, W. 10s. Great Northern, and York and North Midland, 3/. ; Midland, 2/. 12s. 6d. ; East Lancashire, and Edinburgh and Glasgow, 2/. 108. ; Great Western, and London and North-western, 21. 5s. ; Caledonian, I/. 15s. ; London, Brighton, and South Coast, and London and South-western, 11. 10s. ; Chester and Holyhead, and Lancashire and Yorkshire, 1/. 5s.; Lancaster and Carlisle, North British, and York, Newcastle, and Berwick, 11. The de- pression in the principal Foreign lines has been-Paris and Rouen, 31.; Pada and Orleans, 21.; Paris and Lyons, and Western of France, 11. 58. ; Northern of France, Paris and Strasbourg, and Southern of France, 11.; Grand Junction of France, 158.; Rouen And naive, and Sambre and Meuse, 108. Today the English lines have again been. very fiat, and a fall has oc- curred, in many instances, of 5s. to 158. There is not much difference in Foreign.

In consequence of some extensive architectural alterations to be made at the Stock Exchange, the business of the establishment has been temporarily removed to the Hall of Commerce in Threadneedle Street. This has been the first day of entering. Crowds have assembled on the opposite pavement, from the novelty of the scene, and the confusion likely to occur at first. SATURDAY. TWELVE O'CLOCK. In the English Market, the intelligence by telegraph via Paris, with the report of the Russian army marching upon the Turkish frontier, has had no effect upon the Funds. Consols for Account are 981 1 ex div. ; Exchequer Bills 1 to 4 prem. The amounts of New Stocks accepted yesterday were the following. Bank of Fugland. South Sea House.