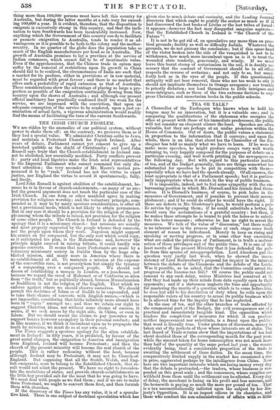 WE are ridden by the anomalies of our political system, without power to shake them off; on the contrary, we preserve them as if they had a special value. We administer Christian oaths to Jews, and maintain a Protestant Church for Popish Ireland. After years of debate, Parliament cannot yet consent to give up a wretched quibble as the shield of Christianity; and Lord John Russell says truly that the Church-establishment in Ireland can- not be abolished, nor essentially modified. Party conflicts prevent it ; Forty and local bigotries make the Irish send representatives to the Imperial Parliament who cannot command but only dis- tract attention ; the very seconder of Mr. Moore's motion pro- nounced it to be "rash." Ireland has not the virtue to exact justice, nor England the virtue to accord it spontaneously, fully, and freely.

Lord John Russell is against abolition of the establishment, be- cause he is in favour of church-endowments,—as many of us are ; but the general argument does not touch the particular case of the Irish Church. In one form or other mankind agree in making provision for religious 'worship; and the voluntary principle, com- mended as it may be by many specious considerations, is after all but a provisional mode, which is not likely to attain permanence. But in any case it should be a provision for the religion of the peo- ple among whom the tribute is raised, not provision for the religion of some other people. The Church in Ireland is defended by the apology that it is a missionary church : but missions are usually and most properly supported by the people whence they emanate, not the people upon whom they work. Napoleon might support his armies on the conquered, but the only sect which could copy, as it anticipated his plan, is the Mahometan ; and, however the principle might succeed in raising tribute, it could hardly win genuine converts. It seems that more Protestants are made by a voluntary missionary society in Dublin than by the huge esta- blished mission, and many more in America where there is no establishment at all. To maintain a mission at the expense of the convertible race, is not proselytism but simply the tyranny of a conquering over a conquered people. We should not dream of establishing a mosque in London, or a joss-house, not because we regard the creed of Mehemet or of Confucius as alien from "the truth," but as politically absurd, because Mussulmanism or Buddhism is not the religion of the English. That which we enforce against others we should observe ourselves. We should permit the doctrines of Islam or of Buddh to be expounded, and to take their chance of converts with English names,—which is not impossible, considering that faiths infinitely more absurd have been in " vogue " amongst us ; and thus we retain our right to suggest Christian ideas, not without some chance of success, it seems, if we seek access by the right side, in China, or even in Islam. But we should resent the claims to pay joss-rates or to support bonzes however exemplary in their personal conduct ; and in like manner, if we think it incumbent upon us to propagate the truth by missions, we must do so at our own cost.

The Times suggests a specious apology for the alien establish- ment in Ireland : in fifty years, it is predicted, by favour of the great social changes, the emigration to America and immigration from England, Ireland will become Protestant ; and then the church of the present minority will become the real church of the people. This is rather reckoning without the host, because although Ireland may be Protestant, it may not be Church-of- England. But supposing that all the Scotch, Welsh, and Eng- lish emigrants, were to belong to the Established Church, that re- sult would not affect the present. We have no right to forecalca- late the mutations of states, and provide church-establishments as the little boy provided salt for the meat that he was going to have. We must deal with people as we find them ; and if we are to make them Protestant, we ought to convert them first, and then furnish them with churches.

If the discovery of the Times has any value, it is of a specula- tive kind. There is one subject of doctrinal speculation which has

given rise to much debate and curiosity, and the Leading Journal discovers that which ought to gratify the seeker as much as if it had discovered the lost books of Livius or the lost tribes of Israel : it appears—however the feet may disappoint sanguine aspirers- that the Established Church in Ireland is "the Church 'of the Future" !

It is not to be got rid of, on speculative any more-than on. prac- tical grounds; facility as well as difficulty forbids. Whatever the grounds, we do not gainsay the conclusion; but if this spear-head of the victor broken into the side of the vanquished is not to be withdrawn how much more incumbent upon us is it to treat the wounded withdrawn, tenderly, generously, and wisely. If we must leave this burnt stump of sectarianism in the soil, it is doubly ne- cessary that the conduct of Government should be in all other respects the reverse of sectarian; and not only be so, but mani- festly look so in the eyes of the people. If this questionable antiquity will not bear removal, those who are too weak to stir it should not implicate themselves in Orange arrogance ; nor truckle to priestly dictation; nor lend themselves to little intrigues and cross-intrigues, such as those of the two extreme factions to sup- press Christian and unsectarian books in the public schools.