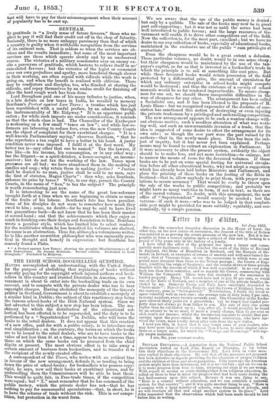 HAVING accomplished an understanding with the United States for the purpose of abolishing that reprinting of books without honestly paying for the copyright which injured authors and book- sellers in this country and stunted literature in America, our Go- vernment is about to enter into the bookselling trade on its own account, and to compete with the private dealer who has to bear copyright charges. Having abolished the monopoly of the Queen's printer in Scotland, Government is about to establish a monopoly of a similar kind in Dublin ; the subject of this reactionary step being the famous school-books of the Irish National system. Since we last adverted to this subject a new step has been taken. The ma- chinery by which the distribution of the educational col- lection has been effected is to be superseded, and the duty is to be performed by a " Superintendent " in Dublin, who will issue the books to the retail dealers. It does not appear that this creation of a new office, paid for with a public salary, is to introduce any real simplification ; on the contrary, the terms on which the books are to be issued to the retail dealers, who are to have books to the value of not less than Si. at a time, appear to be more onerous than those on which the same books can be procured from the chief depeits at present. The most obvious effect is to take away a certain amount of business from booksellers, and to transfer it to the recipient of the newly-created office. A correspondent of the Times, who writes with an evident bias in favour of the new arrangement, defends it, as tending to bring down the price of school-books ; for booksellers who possess copy- right, he says, now sell their books at exorbitant prices, and by underselling them the Commissioners will be able to beat them. This would be quite fair, in Free-trade times, if the competition were equal; but "I." must remember that he has command of the public money, which the private dealer has not—that he has nothing to pay for unsuccessful speculations—that, in short, he is to have the returns of trade without the risk. This is not compe- tition, but proteotion in its worst form.

Even the cheapness would be to a great extent a delusion. These particular volumes, no doubt, would be in one sense cheap ; but their cheapness would be maintained by the use of the tax- payer's capital, so far as that is invested in a bookseller's trade in which the principle is to sell at something like cost price. But while these favoured books would retain possession of the field protected by a differential price, the amount of circulation for which any ordinary enterprise in school-books might compete would be destroyed ; and thus the existence of a variety of school manuals would be so far rendered impracticable. To secure cheap- ness for one set, we should throw insuperable difficulties in the way of cheapness for any other. The arrangement has been called a Socialistic one, and it has been likened to the proposals of M. Louis Blanc : but no recognized expounder of the doctrine of asso- ciation has sanctioned this notion of destroying or even injuring the private tradesman by a privileged and underselling competition. The new arrangement appears to be such a wanton change with- out obvious motive, such a needless alteration of what was work- ing well, and such an unwarrantable invasion of a trade, that the idea is suggested of some desire to effect the arrangement for its own sake ; as though the new part were the part valued by its authors—that is, the newly-made place. This has been the sub- ject of inquiry, but it has never yet been explained. Perhaps means may be found to extract an explanation in Parliament. If it were necessary to alter the present system, evidently the object should be to make less, and not more restriction—to enlarge, not to narrow the means of issue for the favoured volumes. If these books are to be put on some special footing for universal circula- tion before all other educational books, why not adopt a suggestion which has already been laid before Ministers and Parliament, and place the printing of these books on the footing of the Bible in Scotland—that is, allow anybody to print them, with proper regu- lations to secure accuracy ? That would be really to throw open the sale of the works to public competition ; and probably we might have as many varieties in form, if not in text, as there are of the sacred volume. No doubt, with this arrangement, the new office of "Superintendent" would scarcely be needed ; but the veteran—if such it were—who was to be lodged in that comfort. able post might be provided for more suitably, equitably, and eco- nomically, by a simple pension.