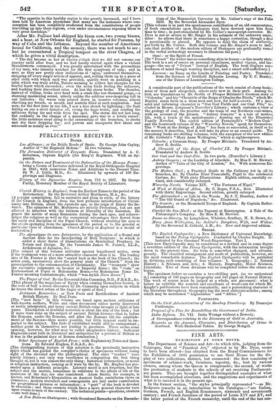 Las Alforgas ; or the Bridle Roads of Spain. By George John Cayley, Author of "Sir Reginald Mohun." In two volumes.

The Jerusalem Delivered of Torquato Teem Translated by A. C. Robertson, Captain Eighth (the Ring's) Regiment. With an Ap- pendix.

On the Nature and Treatment of the Deformities of the Human Frame : beings Course of Lectures delivered at the Royal Orthopedic Hospital in 1843 ; with numerous Notes and Additions to the Present Time. By W. J. Little, M.D., &c. Illustrated by upwards of 160 En- gravings and Diagrams.

History of the Byzantine Empire from 716 to 1057. By George Finlay, of Member of the Royal Society of Literature.

Church History in England, from the Earliest Tunes to the period of the Reformation. By the Reverend Arthur Martineau, M.A., &c. [A popular compilation, full in narrative and plain in style, of the history of the Church in England, from the first probable introduction of Christ- ianity into Britain, about the Apostolic age, to the reign of Henry the Se- venth. The opinions of Mr. Martineau are strictly Protestant, but are not allowed to interfere with the fairness or liberality of the historian. He grants the merits of many Romanists during the dark ages, and acknow- ledges the religious as well as the economical advantages that flowed from the unity and discipline of the Papal Church, without shutting his eyes to the errors springing from the ignorance of the period or to the general or particular vices of churchmen. Church History in England is a model of moderation.] The Apocalypse its own Interpreter, by the application of a Sound and Ancient Rule for the Interpreting of Holy Scripture : to which is added a short Series of Dissertations on Symbolical Prophecy, its Nature and Design. By the Venerable James W. Forster, LL.D., Archdeacon of Aghadoe, &c. [The subject of this volume militates against lengthened notice, even if the treatment were of a more attractive character than it is. The leading idea of Dr. Forster is that the "sealed book is the book of the Church ; the seven seals, successively show the general state of the Church" from the promulgation to the consummation of Christianity. The " trumpets " show the successive judgments on Secular or Imperial Rome ; the vials " on Ecclesiastical or Papal or hialiometan Rome,—by hiahometan Rome Dr. Forster meaning Constantinople, which "was styled Nova Boma."] The Finger of God. By the Reverend John Cumming, D.D., F.R.S.E., &c. [This phrase of the magicians of Egypt when owning themselves beaten, is the text of half a dozen discourses by Dr. Cumming upon subjects in which he traces the direct action of the finger or spirit of God.] Britannic Researches, or New Facts and Rectifications of Ancient British History. By Beal Poste. [The "new facts" in this volume are based upon modern criticisms of well-known authors, Welsh and other documents either newly discovered or newly interpreted, and many ancient British coins brought to light of late years. Elucidation of doubtful materials is about the aim of the hook; but if more were done on the subject of ancient British history—that is, before the Romans, under the Romans, and after the Romans till the establish- ment of the Saxons—than seems possible but little interest could be im- parted to the subject. The facts if established would still be unimportant ; neither great in themselves nor leading to greatness. There seems some opening, however, for what may be called imaginative history. Sufficient fragments exist both in literature and antiquities for a picture of Britain as it was in the palmiest days of Roman domination.] Select Specimens of English Prose; with Explanatory Notes and Ques-

[The die g feature of this selection is the practically instructive spirit which has guided the compiler's choice of specimens without losing sight of the elevated and the philosophical. The older "readers" were purely literary; not only was excellence in composition the first thing thought of, but it was almost the only thing; historical information, or moral OT religious instruction, coming as it were by the by.. Mr. Hughes has pro- ceeded upon a different principle. Literary merit is not forgotten, but the subject and the matter, sometimes in reference to the affairs of life or the questions of the day, are also considered. Adam Smith, for example, is quoted, and Robertson's Disquisition on Ancient India contributes views on commerce ; modern travellers and cosmogonists are laid under contribution for geographical pictures or information ; a "part" of the book is devoted to education ; and those extracts which have a more general character turn

upon events or men of the century. The technical points—questions, etcetera —are well done.]

A Few Notes on Shakespeare; with Occasional Remarks on the Emenda- tions of the Manuscript Corrector in Mr. Collier's copy of the Polio 1632. i By the Reverend Alexander Dyes.. [This volume in part the spontaneous contribution of an old commentator, of fresh emendations upon Shakspere that have dawned upon him from • time to time ; in part stimulated by Mr. Collier's manuscript-corrector. Mr. Dye* is not so severe as Mr. Singer in his estimate of the unknown emen- dator: he allows that there is sometimes a happy correction, though a deal is questionable or absurd. He appears to deny the claim of authorq, put forth by Mr. Collier. Both this volume and Mr. Singer's seem to indi- cate that neither of the modern editors of Shakspere are profoundly versed in the verbal archa3ology necessary to illustrate the poet.] Osme : or the Spirit of Froust. [By " Froust " the writer means something akin to frowsy —a dim musty state. The book is a set of essays on personal cleanliness, mental vigour, and lan- guage—the use of " Froust " instead of English. The book displays same freshness of mind though wanting discipline, and a smart self-sufficiency.] Leicoon : an Essay on the Limits of Painting and Poetry. Translated from the German of' Gotthold Ephraim Leasing. By E. C. Beasley, one of the Tutors of Leamington College.

A considerable part of the publications of the week consist of cheap books; some of them new altogether, others only new in their garb. Among the first, are translations by Mr. Scoble of Prosper Merimee's Corsican story of "Colombo," and his "Chronicle of the Reign of Charles the Ninth," which Mr. Bentley sends forth in a dress neat and new, for half-a-crown. Of a more solid and informing character is "Our Coal Fields and our Coal Pita," in- cluded in Messrs. Longman's Traveller's Library; which contains a view of the geology of coal, the practice and the trade of our Northern coal-mines, with an account of the pitmen. "Aubrey Conyers " is a tale of modern life, with a touch of the melodramatic ; forming one of the Illustrated Family Novelist. The eighth edition of Francatelli'a "Modern Cook" and the fourteenth volume of the " Waverley Novels," speak for themselves. The "Week at the Bridge of Allan" has been so successful, in itself or for the scenery it describes, that it will take its place as an annual guide. The remaining books are shilling volumes, with the exceptiori of the new edition of Mr. Cobbold's "Mary Anne Wellington," which is eighteenpence. Colombo; a Corsican Story. By Prosper Merimee. Translated by An- drew R. Scoble.

4 Chronicle of the Reign of Charles:1X. By Prosper Merimee. Translated by Andrew R. Scoble.

Our Coal and Our Coal-Pits. In two parts. (Traveller's Library.) Aubrey Congers; or the Lordship of Allerdale. By Miss E. M. Stewart,

Author of "Tales of the City of London," &c. With numerous En- gravings.

The Modern Cook; a Practical Guide to the Culinary Art in all its branches, &c. Ity Charles Elme Franeatelli, Pupil to the celebrated Careme, &c. With sixty Illustrations. Eighth edition, carefully re- vised, and considerably enlarged.

Waverley Novels. Volume XIV. "The Fortunes of Nigel." A Week at Bridge of Allan. By C. Roger, F.S.A., Scot. Illustrated with thirty Engravings. Second edition, greatly enlarged. The Adirondack ; or Life in the Woods. By J. T. Headley, Author of "The Old Guard of Napoleon," &c. Illustrated.

The Guards; or the Household Troops of England. By Captain Rafter. Illustrated.

Claribel the Sea-Maid; or the Pageant at Kennyngton. A Tale of the Fishmonger's Company. By Miss E. M. Stewart.

The English Cyclopedia; a New Dictionary of Universal Knowledge, based on the Penny Cyclopedia. Conducted by Charles Knight. Il- lustrated by five thousand Wood-Engravings. Part I. [This new Encyclomedia may be considered as a revised and in some degree a rewritten edition of the Penny Cyclopedia, with the information brought down to the present time. Its form is somewhat changed, and advanta- geously. The classified arrangement and mode of publication, however, are the most remarkable features. The _English, Cyclopedia will be published in divisions, each consisting of four volumes : 1. Geography; 2. Natural History ; 3. Sciences and Arts ; 4. History, Biography, Moral Sciences, Literature. Two of these divisions will be completed before the others arc begun.

The specimen before us contains a two-shilling part, (as we understand it,) consisting of 143 pages on Geography and 143 pages on Natural History. The work of course must be judged as a whole, not piecemeal : what is before us exhibits the number and excellence of wood-cuts for which Mr. Knight's publications have been remarkable, and a painstaking character of the literature throughout. Geography has the most elaborate articles; among which may be mentioned " Afghanistan " and "Africa."]

On the Civil Administration of the Bombay Presidency. By Nourozjee Furdoonjee.

Proposal of a Plan for Remodelling the Government of India. India Reform. No. VII, India Wrongs without a Remedy. A Correspondence relating to the Discovery of Gold in Australia. Remarks on the Amount, Character, and Distribution of Crime in Scotland. With Statistical Tables. By George Makgill.