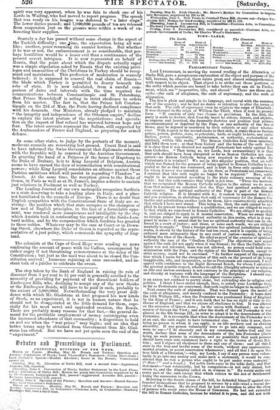 Page 2, 4 June 1853 — Scarcely a day has passed without some change in the
Close

Scarcely a day has passed without some change in the

aspect of the Turkish difficulty; one ime, the expectation being all war- like; another, peace resuming its sunnier horizon. But whether it be war or not, the embarrassment is so considerable, that per- haps hostilities would be a lesser evil than a continuance of the present covert intrigues. It is now represented on behalf of Russia, that the point about which the dispute actually raged was a simple stipulation asked by Russia that the existing privi- leges and immunities of the Christians in Turkey should be recog- nized and maintained. This profession of moderation is scarcely believed : it is supposed to conceal the real claim of Russia— the blade which Turkey is permitted to descry beneath the robe of state. It is now calculated, from a careful com- parison of dates and intervals with the time required for communications between Constantinople and St. Petersburg, that Prince Menschikolf is acting in strict obedience to orders from his master. The fad is, that the Prince left Constan- tinople on the 23d of May, the Porte having declined compliance with his demands. Our Ministers, already pledged to maintain "the integrity and independence of the Ottoman empire," decline to explain the latest posture of the negotiations; and specula- tion on the import of that refusal has wavered between hope and fear. The latest accounts represent the Sultan, still supported by the Ambassadors of France and England, as preparing for armed defence.