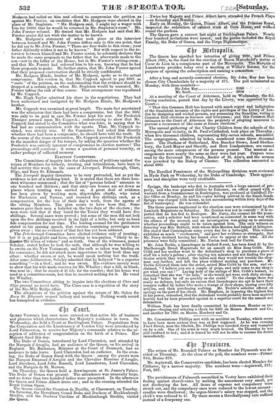 The Queen has signified her intention of giving 200/., and Prince Albert 1001., to the fund for the erection of Baron Marochetti's statue of Crew de Lion in a conspicuous part of the MetroNlis. The Marquis of Lansdowne presides today over a meeting at Willis's Rooms, for the purpose of opening the subscription and naming a committee.

After a long and severely-contested election, Sir John Key has been chosen City Chamberlain by a majority of 271. The poll terminated on Monday, with these numbers—

At a meeting of the Court of Aldermen held on Wednesday, the fol- lowing resolution, passed that day by the Livery, was approved by the Court-

" That this Common Hall has learned with much regret and indignation of the fraudulent invasion of the rights and privileges of the Livery of Lon- don by designing and wicked persons, not possessing the franchise, voting at Common Hall elections as freemen and liverymen ; and this Common Hall intimates to the Court of Aldermen the propriety of adopting measures to prevent a recurrence of like cases at future elections."

The annual gathering of the Charity Children from the schools of the Metropolis and vicinity, in St. Paul's Cathedral, took place on Thursday ; when five thousand children, representing fifty-seven schools, assembled. The congregation, admitted by ticket, numbered some three thousand more. The Duchess of Sutherland, Mrs. Beecher Stowe, Lord Shaftes- bury, the Lord Mayor and Sheriffs, and Herr Lindpaintner, are named among the more conspicuous of the persons present. The musical ar- rangements were nearly the same as they were last year. Prayers were read by the Reverend Mr. Povah, Rector of St. Ann'ilt and the sermon was preached by the Bishop of Chester. The collection amounted to about 600d.

The Enrolled Pensioners of the Metropolitan divisions were reviewed in Hyde Park on Wednesday, by the Duke of Cambridge. Their appear- ance and discipline were very creditable.

Spriggs, the bankrupt who fled to Australia with a large amount of pro- perty, and who was pursued thither by Falconer, an officer armed with a warrant from a Commissioner in Bankruptcy,. was produced at Guildhall Po- lice Office on Monday, he and his captor having arrived in the Sarah Sands. Spriggs was charged with felony, in not surrendering within forty days of the fiat of bankruptcy. He was remanded.

The three persons implicated in the abortion case were reixamined by the Lambeth Magistrate on Saturday. Mr. Gordon was not in custody : it is re- ported that he has fled to Boulogne. Mr. Parry, the counsel for the prose- cution said a solicitor had been mentioned as connected in some wiy, with the offence of the accused, and an investigation was eing on to ascertain whether proceedings ought to be taken against him. The only witness on Saturday was Mrs. Bobbett, with whom Miss Manion had lodged at Islington. She stated that Cunningham came every day for a fortnight. This witness exhibited so much "excitement," and gave her evidence so strangely, that Mr. Parry declined having her bound over to appear at the trial. All the prisoners were fully committed ; Mr. Norton took bail for Currie.

Mr. John Treble a linendraper in Oxford Street, has been fined 51. by the Marlborough Street Magistrate for an assault on Miss Roza Cribb. Miss Cribb and her mother went to the defendant's shop to purchase a piece of stuff for a baby's pelisse ; after staying ten minutes and not finding the par- ticular article they wished, the ladies said they would not trouble the shop. man any farther, and left the place without making any purchase. Mr. Treble followed them into the street, seized Miss Cribb by the arm, and ex- claimed, "1 believe you are a couple of prigs, and only come to my shop to get what you can !' Laying hold of the strings of Mrs. Cribb's bonnet,, he remarked that she was "no lady," or she would not wear such dirty strings; she had "better be off as quickly as she could." To the charge there was really no defence, but only an excuse that linendra.pers are apt to have their tempers ruffled by ladies who make a lounge of their shops, tossing over fifty articles, and then purchasing nothing. Mr. Treble's solicitor offered an apology on the part of his client. Mr. Bingham, in imposing the highest fine in his power, remarked, that the defendant would probably have been mulcted heavily had he been proceeded against in a superior court for the assault and defamation.

William Nash has been finally committed by Alderman Hunter on two charges—forging and uttering a check for 8501. on Messrs. Barnett and Co., and another for 7681. on Messrs. Hanbury and Co.

Mr. Commissioner Phillips met with an accident on Tuesday, which seems to have been more serious than was at first supposed. As he was crossing Fleet Street, near the Obelisk, Mr. Phillips was knocked down and trampled on by a cab. One of his arms is very much bruised. On Thursday he was still confined to bed; and it is feared he will not be able to resume his duties immediately.