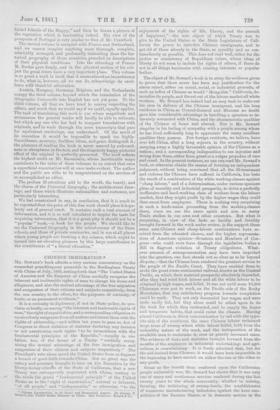 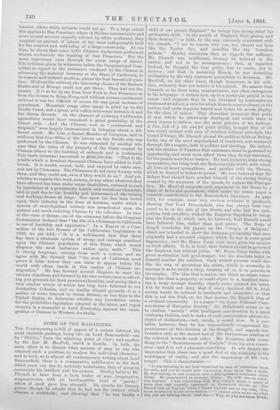 on the somewhat grandiloquent preamble iu the Burlingham Treaty with China of July, 1868, setting forth that " The United States of America and the Emperor of China cordially recognise the inherent and inalienable rights of man to change his home and allegiance, and also the mutual advantage of the free migration and emigration of their citizens and subjects respectively, from the one country to the other, for the purposes of curiosity, of trade, or as permanent residents."

It is a curiosity in diplomacy, if not in State policy, to pro- claim so loudly, as among " the inherent and inalienable rights of man," the right of expatriation, and a corresponding obligation to receive freely emigrants from all nations and invest them with the rights of citizenship,—and within ten years to pass an Act of Congress in direct violation of statutes declaring any decision or act questioning such rights "to be inconsistent with the fundamental principles of the Republic,"—equally in vio- lation, too, of the terms of a Treaty " cordially recog- nising the mutual advantage of the free immigration and emigration of their citizens and subjects respectively." The President's veto alone saved the United States from so flagrant a breach of good-faith towards China. But so great was the outcry and pressure brought to boar on the Executive by the liberty-loving citizens of the State of California, that a new Treaty was subsequently negotiated with China, casting to • the winds the grand "fundamental principle " of the United States as to the " right of expatriation," natural or inherent, "of all people," and "indispensable," or otherwise, " to the

enjoyment of the rights of life, liberty, and the pursuit of happiness,"—the solo object of which Treaty was to give to the United States or the State Legislature of Cali- fornia the power to interdict Chinese immigrants, and to get rid of those already in the State, as speedily and as con- tumeliously as possible. This does not read well, either for the justice or consistency of Republican rulers, whose ideas of liberty do not seem to include the rights of others, if these do not in all things harmonise with existing iuterests or popular feeling.

The object of Mr. Seward's book is to array the evidence given to prove that there never has been any justification for the alarm raised, either on moral, social, or industrial grounds, of such an influx of Chinese as would " Mougolise " California, de- moralise its people, and thrust out of the labour market all white workers. Mr. Seward has indeed had an easy task to make out his case in defence of the Chinese immigrant, and his long residence in China as Consul-General and Minister no doubt gave him considerable advantage in handling a question so in- timately connected with China, and the characteristic qualities of the Chinese at home and abroad, Nor is Mr. Seward singular in his feeling of sympathy with a people among whom he has lived sufficiently long to appreciate the many excellent qualities they possess. Few foreign residents, we believe, have ever left China, aftei a long sojourn in the country, without carrying away a highly favourable opinion of the Chinese as a nation ; and a corresponding indisposition to see injustice and wrong done them, either from greed or a vulgar prejudice of race and creed. In the present instance, no one can read Mr. Seward's book, or otherwise obtain the means of forming an independent judgment, without being convinced that all the ill-treatment and violence the Chinese have suffered in California, has been the result of a combination of the white working-classes against "cheap labour," and of a determination, under various specious: pleas of morality and industrial prosperity, to drive a perfectly inoffensive and hard-working class of workers from the labour market, that they might profit by the higher wages they could then exact from employers. There is nothing very surprising in such a trade-union proceeding from the working-classes there, since we see the same spirit and aim in many Trade strikes in our own and other countries. But what is surprising, iu view of •the facts so lucidly and forcibly brought forward in the work under review, is the support these same anti-Chinese and cheap-labour combinations have re- ceived from the educated classes, and the higher representa- tives of American opinion—Senators and Members of Con- gress—who could even force through the legislative bodies a Bill in thigraut violation of Treaty obligations. What- ever amount of misrepresentation may have been imported into the question, one fact stands out so clear as to be beyond dispute,—that the Chinese have rendered the greatest service to the people of the Pacific Coast. They have enabled them to make the great trans-continental railroad, known as the Central Pacific, on which their material prosperity absolutely depended, after they had tried Irish labour and all the white labour to be obtained by high wages, and failed. It was not until some 10,000. Chinamen were put to work, on the Pacific side of the Rocky Mountains, that any satisfactory progress towards completion could be made. They not only demanded less wages, and were moire easily fed, but they alone could be relied upon to do the work for which they contracted, and to supply the frame and temperate habits, that could resist the climate. Having placed California in direct communication by rail with the oppo- site side of the continent, the same Chinese labour reclaimed large areas of swamp where white labour failed, both from the unhealthy nature of the work, and the indisposition of the available men to undertake it, even at greatly increased rates. The evidence of facts and statistics brought forward from the mouths of the employers in industrial undertakings and agri- culture, is overwhelming. It is freely admitted that, but for the aid derived from Chinese, it would have been impossible in the beginning to have carried on either the one or the other to any profit.

Great as the benefit thus conferred upon the Californian people undeniably was, Mr. Seward has shown that it was only one of many and continuous services rendered during the last

twenty years to the whole community, whether in mining, farming, the reclaiming of swamp-lauds, the establishment of numerous manufacturing industries, against the keen com- petition of the Eastern States, or in domestic service in the

interior, whore white servants would not go. To a largo extent 'this applies to San Francisco, where in the less remunerative and more menial services (equally refused by white workmen), they supplied an amount of labour of the most indispensable kind for the comfort and well-being of a large community. At one time, he shows that some 3,000 Chinese washermen performed almost exclusively the washing of San Francisco. But the same experience runs through the whole range of labour. The evidence given by witnesses before the Congressional Com- mittee in regard to the assistance rendered by the Chinese in advancing the material interests of the State of California, in its remote and isolated position, places the fact beyond all ques- tion. Without the railroad, the labouring classes of the Eastern 'States and of Europe could not get there. They had not the means. lt is as far by sea from New York to San Francisco as from the former to Hong Kong, and without a trans-continental railroad it was too difficult of access for any great increase of population. Mountain range after range is piled up on the Pacific Coast, and a great, arid valley intervenes between it and the Sierra Nevada. In the absence of railways, Californian agriculture would have remained a great possibility of the future only. And the Chinese, now so " contemned and despised," were largely instrumental in bringing about a dif- ferent result. Mr. Low, a former Member of Congress, said in evidence that four-fifths of the labour on the Pacific side was performed by the Chinese. It was estimated by another wit- ness that the value of the property of the State created by 'Chinese labour in the building of railroads and in reclaiming 'Tule-lands (swamps) amounted to $289,700,000. "That is the wealth which a hundred thousand Chinese have added to Cali- fornia. It is wealth owned, held, and enjoyed by white men, and not by Chinamen. The Chinamen do not carry it away with them, and they could not, even if they would do so." And yet,

-whether as regards this work, mining, or any other, whatever they have effected has been under many disabilities, enforced in part

by legislation of a persistently hostile and vexatious character, -and in part due to the hostility and lawlessness of the mining and working-classes at large. Tax upon tax has been levied -upon their industry in the form of licences, under which a -species of semi-legalised robbery was perpetrated upon the patient and much-enduring Chinese by the collectors. In view of this state of things, one of the witnesses before the Congress Commission declared that "the life of a Chinaman in California is one of hardship and oppression." In a Report of a Com- mittee of the two Houses of the Californian Legislature in 1862, we are told,—" It is a well-known fact that there has been a wholesale system of wrong and outrage practised upon the Chinese population of this State, which would disgrace the most barbarous nation upon earth." This is strong language, coming from such a source, and we agree with Mr. Seward that " the men of California must -prove it false before they can claim to appear before the 'world with clean hands in this matter of Chinese im- migration." He has devoted several chapters to meet the various objections put forward by his own countrymen as afford- ing just grounds for their persistent hostility, and seeing that a very similar course of action has long been followed in our Australian Colonies, and on similar alleged grounds, it is a matter of some interest to Great Britain, no less than to the United States, to determine whether any foundation exists for the prohibitive legislation adopted in the latter, and urged recently in a memorial to Lord Kimberley, against the immi- gration of Chinese to Western Australia.