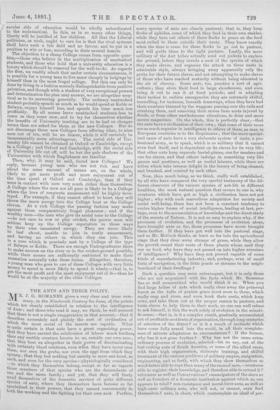 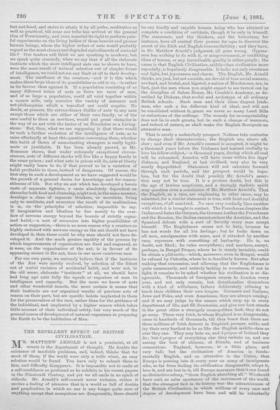 THE ANTS AND THEIR POLITY.

inary, in the Nineteenth Century for June, ot the points winch are clearly established in relation to the intelligence of Ants ; and those who read it may, we think, be well assured that there is not a single exaggeration in that account,—that it describes accurately and plainly the sort of civilisation of w. hieh the most social of the insects are capable. What is quite certain is that ants have a great organising power, that they have carried the subdivision of labour much further than any thatearthly creature known to us, outside our own race ; they beat us altogether in their yower of discriminating with certainty blood relations, even when they have never seen them, nor seen the grubs, nor even the eggs from which they sprang; that they feel nothing but enmity to mere ant-hood, as such, and even for the very species—physiologically considered —to which they themselves belong, except so far as regards those members of that species who are the descendants of One and the same family ; and yet, that they will freely avail themselves of the domestic services of quite different species of ants, where they themselves have become so far specialised in their powers, that they cannot conveniently do both the working and the fighting for their own nest. Further,

Such a question may seem extravagant, but it is only those who are not acquainted with, the facts which Mr. Romance has so well summarised who would think it so. When you find large tribes of ants which really clear away the primeval forest as the tufts of prairie grass must seem to them, which really reap and store, and even husk their seeds, which keep cows, and take them out at the proper season to pasture, and train slaves to help them in their work, no one can well refuse to ask himself, is this the work solely of evolution in the scienti- fic sense,—that is, is it a complex result, gradually accumulated out of profitable accidents of organisation, through long centuries of selection of the fittest P or is it a result of instincts which have come fully armed into the world, in all their complete- ness of minute adaptation to circumstances P If the former, why has it not gone further P Why has not the same extra- ordinary process of evolution, selected—let us say, out of the leaf-cutting ants of South America, or some of the allied races, with their high organisation, elaborate training, and skilful treatment of the various problems of military empire, emigration, engineering, and so forth, with which they show themselves so much better able to cope than many of the races of men,— creatures able to register their knowledge, and therefore able to extend it P reformers as well as Conservatives P emancipators of the slave as well as founders of a domestic institution against which no one appears to rebel P non-resistance and moral-force ants, as well as high-caste military ants, who will not, or cannot, even feed themselves P ants, in short, which contemplate an ideal of per- many species of ants are clearly pastoral; that is, they keep flocks of aphides, some of which they feed in their own stables, while they turn out others of these flocks to graze on the food most suited to them outside their nests. They know exactly when the time is come for these flocks to go out to pasture, and will guide them to the right pasture. Lastly, the more military of the Ant tribes actually send out pickets to explore the ground, before they invade a nest of the species of which they make slaves, and organise the attack on these nests in admirable style, always bringing away apparently only the grubs for their future slaves, and not attempting to make slaves of those who have reached maturity without being educated in the air of slavery. Some ants, too, practice a sort of agri- culture; they store their food in large storehouses, and even bring it out to sun it at fixed periods; and in adapting their tactics to sudden emergencies they are extremely skilful, tunnelling, for instance, beneath tramways, when they have had their numbers thinned by the waggons passing over the rails and crushing them, and removing their stores from nests injured by floods, or from other unwholesome situations, to drier and more secure magazines. On the whole, this is perfectly clear,—that the ants have a civilisation of their own ; that some of their races are as much superior in intelligence to others of them, as man in European countries is to the Fsquimaux ; that the more special- ised races of ants have a very elaborate system of caste, a pro- fessional army, so to speak, which is so military that it cannot even feed itself, and is dependent on its slaves for its very life ; that other ants keep separate burial-places, one for masters and one for slaves, and that others indulge in something very like games and pastimes, as well as useful labours, while there are tribes which take intense delight in the luxury of being cleaned, and brushed, and combed by each other.

Now, thus much being, as we think, really well established, by all who have compared the very careful testimony of the dif- ferent observers of the various species of ant-life in different localities, the most natural question that occurs to one is, why creatures which have got so high a civilisation have not got higher ; why with such marvellous adaptation for society and social well-being, there has not been a constant tendency to evolve higher forms of social intelligence, leading at last, per- haps, even to the accumulation of knowledge and the direct study of the secrets of Nature. It is not so easy to explain why, if the processes of evolution, and the processes of evolution alone, have brought ants so far, those processes have never brought them farther. If they have got well into the pastoral stage, and as Mr. McCook thinks, at least so far into the agricultural stage that they clear away stumps of grass, while they allow the growth round their nests of those plants whose seed they use as food, why have they not passed on into higher exercises of intelligence P Why have they not proved capable of some kinds of manufacturing industry, and, perhaps, even of small feats of navigation, in the little ponds or streams in the neigh- bourhood of their dwellings P feet ant-hood, and strive to attain it by all paths, meditative as well as practical, till some one tribe has arrived at the general idea of Formicanity, and even asserted its right to perform pain- ful experiments on the living bodies of those heavier and grosser human beings, whom the higher orders of ants would probably regard as the most clumsy and degraded embodiments of material life P Our readers will think we are speaking in mockery, but we speak quite sincerely, when we say that if all the elaborate instincts which the more intelligent ants can be shown to have, were the mere result of natural selection out of simpler forms of intelligence, we could not see any limit at all to their develop- ment. The smallness of the creature,—and it is this which makes these large ideas of its possibilities so odd to 119,—is rather in its favour, than against it. If a population consisting of as many different tribes of ants as there are races of men, and of as largo a population, could all exist together within a square mile, only conceive the variety of manners and ant-philosophies which a travelled ant could acquire. No doubt, at present, the extraordinary dislike of ants to any ants except those which are either of their own family, or of the race useful to them as servitors, would put great obstacles in the way of an ant with the tastes of an Herodotus or a Living- stone. But, then, what we are supposing is that there would be such a further evolution of the intelligence of ants, as to raise effectually at least this question concerning them, whether this habit of theirs of assassinating strangers is really legiti- mate or justifiable. It has been already proved, as Mr. Romance shows, that under extremely exceptional circum- stances, ants of different stocks will live like a happy family in the same prison ; and what ants in prison will do, ants at liberty might easily learn to do, if that proved to be a variation of habit profitable to them, instead of dangerous. Of course, the first step in such a development as we have suggested would be the growth of a general desire for knowledge and for reason- ableness of life. But why an ant which has developed a heroic caste of separate fighters, a caste absolutely dependent on slaves for both food and cleansing, might not, in the same manner, developo a class of separate thinkers, or moralists, living only to meditate, and announce the result of its meditations, it is, on the principles of selection, impossible to say. If imagination and idealism be due merely to the over- flow of nervous energy beyond the bounds of strictly organ- ised habit,—a sort of excursion into higher possibilities of action or suggestion,—there is no more reason why a creature so highly endowed with nervous energy as the ant should not have developed it, than there could be why man should not have de- veloped it. And the much greater rapidity of the process by which improvements of organisation are fixed and engraved, as it were, on the organisation of the ant, is in favour of its appearing sooner in the ant, than in our more cumbrous race.

For our own parts, we seriously believe that if the instincts of the Ant were merely evolved, by selection of the fittest out of useful varieties of accidental habit, and were not, in the old sense, elaborate " instincts " at all, we should have had long ago ants fully the equals or superiors of man in intelligence and capacity. But the more we know of ants and other wonderful insects, the more certain it seems that their instincts are not organised results of previous acts of reason on their part, but are specific habits implanted in them for the preservation of the race, rather than for the guidance of the individual, and implanted by a higher reason which takes little account of their individual safety, but very much of the general course of development of natural organisms in preparing the Earth to be the habitation of Man.