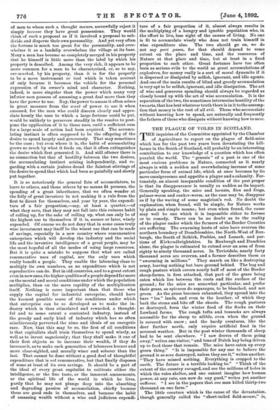 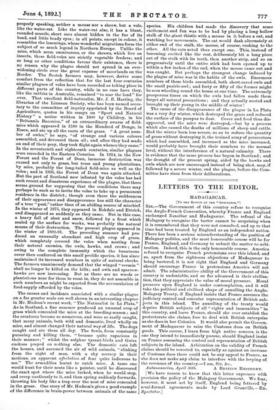 THE PLAGUE OF VOLES IN SCOTLAND.

THE inquiries of the Committee appointed by the Chamber of Agriculture to report on the plague of field-mice which has for the past two years been devastating the hill- farms in the South of Scotland, will probably be an interesting contribution to our knowledge of a question which has often puzzled the world. The " genesis " of a peat is one of the most curious problems in Nature, connected as it nearly always is with a sudden and overwhelming increase of some particular form of animal life, which at once becomes by its mere omnipresence and appetite a plague and a calamity. For- tunately, an almost inseparable condition of the peat proper is that its disappearance is usually as sudden as its impact. Generally speaking, the mice and locusts, flies and frogs, palmer-worm and canker-worm, as the case may be, disappear as if by the waving of some magician's rod. No doubt the explanation, when found, will be simple, for Nature works by plain and simple means ; but even when found, the cause may well be one which it is impossible either to foresee or to remedy. There can be no doubt as to the reality of the plague under which the farmers of the Border Counties are suffering. The swarming hosts of mice have overrun the northern boundary of Dumfriesshire, the North-West of Rox- burgh, the South of Selkirk, Peebles, and Lanark, and por- tions of Kirkcudbrightshire. In Roxburgh and Dumfries alone, the plague is estimated to extend over an area of from eighty to ninety thousand acres. In Teviotdale, nearly forty thousand acres are overrun, and a farmer describes them as "swarming in millions." They march on like a destroying army, leaving nothing but bare ground behind. The bog and rough pasture which covers nearly half of most of the Border sheep-farms, is first attacked, that part of the grass being eaten which lies between the roots and the surface of the ground ; for the mice are somewhat particular, and prefer their grass, as epicures do asparagus, to be bleached, and not green. As the grass becomes exhausted, they spread into the bare " lea " lands, and even to the heather, of which they bark the stems and bite off the shoots. The rough pastures so destroyed, form the winter food of the flocks on their Lowland farms. The rough tufts and tussocks are always accessible for the sheep to nibble, even when the ground is covered with snow ; and the hardy creatures, like the deer further north, only require artificial food in the severest weather. But in the past winter thousands of sheep had to be sent elsewhere. "I saw droves of them going away," writes one visitor, "and tons of Dutch hay being driven up to feed those that remain. The mice have eaten up every green thing." "It is impossible for any one to believe the ground is so sore destroyed, unless they see it," writes another. "They have missed nothing. Everything is cropped to the earth. The future is a terrible looking to." "Think of the extent of the country ravaged, and see the millions of boles in which the voles shelter, and one cannot imagine how human power, at any rate, can now do any good," writes yet another sufferer. "I see in the papers that one man killed thirty-two thousand on one farm."

The little creature which is the cause of the devastation, though generally called the "short-tailed field-mouse," is, properly speaking, neither a mouse nor a shrew, but a vole, like the water-rat. Like the water-rat also, it has a blunt, rounded muzzle, short ears almost hidden in the far of its head, and little beady eyes ; in all points, except in colour, it resembles the lemmings, whose wonderful migrations form the -subject of so much legend in Northern Europe. Unlike the mice, which seem omnivorous, or the shrews, which live on insects, these field-voles are strictly vegetable feeders; and so long as other conditions favour their existence, there is no reason why the plague should not spread in an ever- widening circle over the great expanse of moorlands on the Border. The Scotch farmers may, however, derive some comfort from the reflection that for the last four centuries eimilar plagues of voles have been recorded as taking place in -different parts of the country, while in no case have they, like the rabbits in Australia, remained "to mar the land" for ever. That excellent field-naturalist, Mr. J. E. Harting, the

• librarian of the Liamean Society, who has been named secre- tary to the committee of inquiry appointed by the Board of Agriculture, qnotes in his essays on "Sport and Natural History" a notice written in 1600 by Childrey, in his "Britannia Baconica," of an extraordinary swarm of field- mice which appeared in 1580 in the Hundred of Denge, in Essex, and ate up all the roots of the grass. "A great num- ber of owles," he says, "of strange and various colours assembled, and devoured them all; and after they had made an end of their prey, they took flight again whence they came." In the seventeenth and eighteenth centuries, similar plagues were recorded in the Eastern Counties. In 1814, in the New Forest and the Forest of Dean, immense destruction was -caused not only to grass, but trees and young plantations, by mice, probably the long-tailed field-mice as well as the voles ; and in 1836, the Forest of Dean was again attacked. But the part of Scotland now infested by the voles has had such recent and disastrous experience of the plague, that there seems ground for supposing that the conditions there may perhaps be such as to invite the voles to take up a permanent residence in the district ; though even there the suddenness of their appearance and disappearance has still the character -of a true "pest," rather than of an abiding source of mischief. In the winter of 1875, they appeared in Eskdale and Ettrick,

• and disappeared as suddenly as they came. But in this case, a heavy fall of sleet and snow, followed by a frost which sealed up the surface for weeks, was probably the natural means of their destruction. The present plague appeared in the winter of 1890-91. The preceding summer had pro- duced an unusually abundant and high crop of grass, which completely covered the voles when nesting from their natural enemies, the owls, hawks, and crows ; and owing to the complete immunity which the bounteous cover then conferred on this small prolific species, it has since maintained its increased numbers in spite of natural checks. The farmers unanimously demand that the winged " vermin " -shall no longer be killed on the hills; and owls and sparrow- hawks are now increasing. But as there are no woods or plantations near for them to roost in, they do not assemble in such numbers as might be expected from the accumulation of food-supply afforded by the voles.

The causes and incidents associated with a similar plague -on a far greater scale are well shown in an interesting chapter in Mr. Hudson's recent work, "The Naturalist in La Plata." As in Scotland, a fine summer produced an unusual crop of -grass which concealed the mice at the breeding-season ; and the creatures became so numerous, and were so easily caught, that many animals, both wild and domestic, lived wholly on mice, and almost changed their natural way of life. The dogs -caught and ate them all day. The fowls, from constantly pursuing and killing them, "became quite rapacious in their manner;" whilst the sulphur tyrant-birds and Guira .cuckoos preyed on nothing else. The domestic cats left the houses, and assumed the air of wild animals, "slinking from the sight of man, with a shy secrecy in their motions, an apparent affectation of fear quite ludicrous to see." The armadillos learnt to catch mice. A tame one would hunt for their nests like a pointer, until he discovered the exact spot where the mice lurked, when he would stop, and creep cautiously to it, and then spring suddenly forwards, throwing his body like a trap over the nest of mice concealed in the grass. One story of Mr. Hudson's gives a good example of the difference in brain-power between animals of the same

species. His children had made the discovery that some excitement and fun was to be had by placing a long hollow stalk of the giant thistle with a mouse in it before a cat, and watching her movements. The cat would dash alternately at either end of the stalk, the mouse, of course, rushing to the other. All the cats acted thus except one. This, instead of becoming excited like the rest, deliberately bit a long piece out of the stalk with its teeth, then another strip, and so on progressively until the entire stick had been opened up to within a few inches of the end, when the mouse came out and was caught. But perhaps the strangest change induced by the plague of mice was in the habits of the owls. Enormous numbers of these birds assembled, both short-eared owls and the small prairie-owl ; and forty or fifty of the former might be seen wheeling round the house at one time. The extremely prosperous times on which the owls had fallen made them forget all natural precautions ; and they actually nested and brought up their young in the middle of winter !

The cause of the disappearance of the plague in La Plata was a very dry winter, which destroyed the grass and reduced the surface of the pampas to dust. Cover and food thus dis- appeared, and the mice were destroyed,—but by a process which also caused the deaths of millions of sheep and cattle. Had the winter been less severe, so as to reduce the quantity of grass without destroying it, the trained army of persecutors which had assembled, and increased as the mice increased, would probably have brought their numbers to the normal level, without the interference of a natural calamity. There is evidence that the same process has begun in Scotland ; and the drought of the present spring, aided by the hawks and owls which are now encouraged instead of being shot, may, if followed by a severe winter, end the plague, before the Com- mittee have risen from their deliberations.