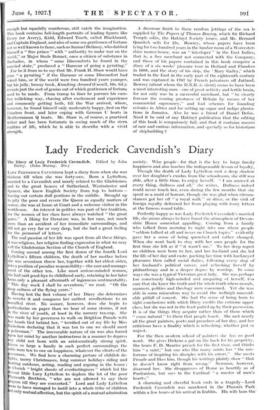 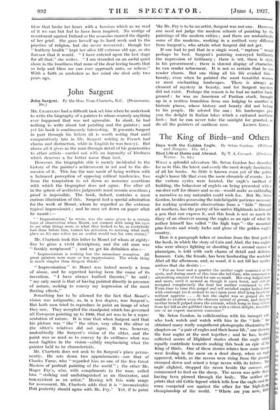 Lent FREDERICK CAVENDISH kept a diary from when she was thirteen till when she was forty-one. Born a Lyttelton, married to a Cavendish and nearly related to the Gladstoncs, and to the great houses of Sutherland, Westminster and Spencer, she knew English Society from top to bottom— leaving out certain dull portions in the middle. Brought up to pity the poor and revere the Queen as equally matters of course, she was at home at Court and a welcome visitor in the workhouse. An interest in politics was part of her tradition, for the women of her class have always watched " the great. game." A liking for literature was, in her case, not much more than an accident of her immediate surroundings, and. lid not go very far or very deep, but she had a great feeling for the personnel. of letters.

The real passion of her life was apart from all these things, t was religious, her religion finding expression in what we may call the Gladstonian Section of the Church of England. Coming second among the first dozen of the fourth Lord Lyttelton's fifteen children, the death of her mother before she was seventeen threw her, together with her eldest sister,. nto a position of peculiar responsibility—the care and manage- ment of the other ten. Like most serious-minded women, she had said good-bye to childhood early, retaining in her later eens only a pleasant aftermath of ingenuous sentimentality. " This day week I shall be seventeen," we read. " Oh the eep sadness of the flying years.'' Having lost the first volume of her Diary she determines o rewrite it and compares her earliest recollections to an nruffled river. No sooner, however, does she begin to articularize on paper than we hear of some storms, if not the river of youth, at least in the nursery tea-cup. She as made by her governess to walk on Brighton Parade with Cr hands tied behind her, " terrified out of my life by Miss itholson declaring that it was ten to one we should meet policeman." The irrevocable nature of sin was also forced pon her mind by another instructress in a manner to depress ny child not born with an aristocratically strong spirit. yen so large a family in such perfect surroundings the dds were ten to one on happiness, whatever the efforts of the overriess. We find here a charming picture of childish de- ghts, merry Christmases,

sting outdoors, long summer holidays riding and acting, reading and arguing in the house ; Church " bright shoots of everlastingness " which led the evout little Lucy Lyttelton to deplore the lot of the poor YMouth Brethren, " who are not allowed to say their raYers till they are converted." Lord and Lady Lyttelton In to have managed to instil into a whole tribe of children t mutual affection, but the spirit of a mutual admiration

society. Wise people—for that is the key. to large family happiness and also teaches the indispensable lesson of loyalty; Though the death of Lady Lyttelton cast a deep shadow. over her daughter's exodus from the schoolroom, she still was able, after a little time, to enjoy herself. " I am amused at every thing, dullness and all," she writes. Dullness indeed could never touch her, even during the few months that she spent as a maid of honour, though she was glad when circum- stances got her off " a Loyal walk " or drive, or the visit of foreign royalty delivered her from playing with ivory letters at the famous round table.

Perfectly happy as was Lady Frederick Cavendish's married. life, she seems always to have found the atmosphere of Devon- shire House somewhat appalling. Coining from a family who talked from morning to night into one where people "seldom talked at all and never on Church topics" evidently gave her a sense of being quenched and rather changed.. When she went back to stay with her own people for the first time she felt as if " it wasn't me." To her deep regret no children were born to her, and her husband and she led the life of her day and caste, packing lies time with hackneyed pleasures then called social duties, following every step of her husband's political career, and refreshing. herself by philanthropy and in a deeper degree by worship. In some ways she was a typical Victorian great lady. She was perhaps too consciously high-minded and unsparing of herself, too sure that she knew the truth and the whole truth where morals,. manners, polities and theology were concerned. Yet she was able in some miraculous way to avoid the wellnigh unavoid- able pitfall of conceit. She had the sense of being born to right conclusions with which Dizzy credits the extreme upper class, but she was not in the least puffed up by their possession. It is of the things they acquire rather than of those which " come natural " to them that people boast. She met nearly all the great painters, poets and preachers of her day, and her criticisms have a finality which is refreshing, whether just or unjust.

For the then modern school of painters she has no good word. She gives Dickens a pat on the back for his propriety. She hears F. D. Maurice preach for the first time, and thinks him " a saint," but one who like many saints has " the mis- fortune of inspiring his disciples with his errors." She meets Froude and likes him, though his writings plainly show " that he doesn't know right from wrong." Newman, however, disarmed her. She disapproves of Rome as heartily as of Puritanism, but sees in the Cardinal " a master of men's hearts."

A charming and cheerful hook ends in a tragedy—Lord Frederick Cavendish was murdered in the Phoenix Park within a few hours of his arrival in Dublin. His wife bore the"

blow that broke her heart with a heroism which as we read of it we can but feel to have been inspired. No vestige of resentment against Ireland or the assassins marred the dignity of her grief. She gave herself up to hard work and to the practice of religion, but she never recovered ; though her " leathery health " kept her alive till extreme old age, as she foresaw that it would. " I have entered upon the last stage for all that," she writes. " I am stranded on an awful quiet shore in the loneliness that none of the dear loving hearts that so help and bless me can ever approach unto, or relieve." With a faith as unshaken as her mind she died only two years ago.