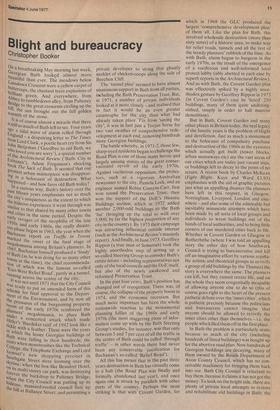 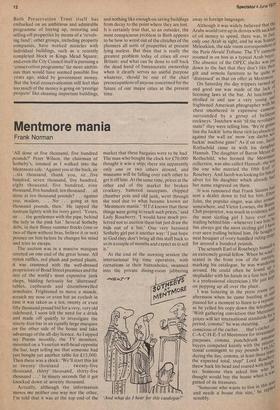 On a breathtaking May morning last week, Georgian Bath looked almost more beautiful than ever. The meadows below Lansdown Crescent were a yellow carpet of buttercups, the chestnut trees explosions of brilliant green. And everywhere, from Abbey to tumbledown alley, from Pulteney Bridge to the great crescents circling up the hill, the sun brought out the full golden warmth of the stone. .It is of course almost a miracle that there is still so much of Bath left to see. Four years ,ago a tidal wave of alarm rolled through zngland — a despairing letter to The Tunes from Lord Clark, a poetic heart cry from Sin John Betjeman (`Goodbye to old Bath, we Who loved you are sorry'), a special number

of the Architectural Review ('Bath: City n Extrernis'), Adam Fergusson's shocking honk The Sack of Bath. It seemed that our greatest urban masterpiece was disappearing In a holocaust of destruction. What happened — and how fares old Bath today?

In a curious way, Bath's history over the

Past fifteen years emphasises not so much the eity's uniqueness as the extent to which the hideous experience it went through was SImilar to that shared by many other towns and cities in the same period. Despite the early ravages of the neophilia of the late 1950s and early 1960s, the really disastr°_us phase began in 1963, the year when the Buchanan report on Traffic in Towns Marked the onset of the final stage of Tegalomania among Britain's planners. In, 1965, Buchanan himself produced a 'Study ‘3! Bath (as he was doing for so many other towns at the time), the chief recommendation

of which was the famous so-called East-West Relief Road', partly in a tunnel, tinning across the centre of the city. It was not until 1971 that the City Council

was ready to put an amended form of this scheme for final approval to the Depart.Tent of the Environment, and by now all boom pressures of the burgeoning property uoorn of the early 1970s reinforced the Planners megalomania, to place Bath Under a concerted attack Which made ti Itler's 'Baedeker raid' of 1942 look like a tckli e with a feather. These were the years Isn which the lesser Georgian buildings of Bath were falling in their hundreds; the Years when monstrosities like the Technical College, the Telephone Exchange and Lord '3,,aninel's new shopping precinct in Niaithgate Street were looming over the skybne; when the box-like Beaufort Hotel, (b,n Its multi-storey car park, was destroying forever the backdrop to Pulteney Bridge; When the City Council was putting up its nideons, mansard-roofed council flats up the hill at Ballance Street, and permitting a

private developer to string that ghastly necklet of chicken-coops along the side of Beechen Cliff. The 'tunnel plan' seemed to have almost unanimous support in Bath from all parties, including the Bath Preservation Trust. But, in 1971, a number of private individuals looked at it more closely — and realised that in fact it would be an even greater catastrophe for the city than what had already taken place. Far from 'saving the city', it was in fact just a Trojan horse for two vast swathes of comprehensive redevelopment at each end, removing hundreds more Georgian buildings.

The battle whereby, in 1971-2, those few, sharp-eyed residents began to challenge the Road Plan is one of those many heroic and largely unsung stories of the great conservationist revolt of the early 1970s. Against vociferous opposition, the protestors, such as a vigorous Australian newcomer to the city, Pamela Lock, and an engineer named Robin Comyns-Carr, first won round the Preservation Trust; then won the support of the DoE's Historic Buildings section, which in 1972 added another 2,000-odd buildings to the Bath 'list' (bringing up the total to well over 5,000, by far the highest proportion of any city in the country). By 1973 their campaign was attracting influential outside interest (such as the Architectural Review's masterly report). And finally, in June 1973, Geoffrey Rippon (a true man of Somerset) took the highly unorthodox step of setting up a so-called Steering Group to consider Bath's entire future — including representatives not only of the local councils and the DoE itself, but also of the newly awakened and reformed Preservation Trust.

In the past four years, Bath's position has changed out of recognition. There was, of course, the collapse of the property boom in 1974, and the economic recession. But much more important has been the whole nationwide reaction to the monumental planning follies of the 1960s and early 1970s (the most staggering piece of infor mation come up with by the Bath Steering Group's studies, for instance, was that only between 5 and 7 per cent of all the traffic in the centre of Bath could be called 'through traffic' — in other words there had never been any conceivable justification for Buchanan's so-called 'Relief Road').

All this has meant that in the past three years destruction in Bath has virtually come to a halt (the Road Plan was finally and formally abandoned last year), and once again one is struck by parallels with other parts of the country. Perhaps the most striking is that with Covent Garden, for

which in 1968 the GLC produced the largest 'comprehensive development plan' of them 'all. Like the plan for Bath, this involved wholesale destruction (more than sixty acres) of a historic area, to make way for relief roads, tunnels and all the lest of the trendy planners' rubbish of the time. As with Bath, alarm began to burgeon in the early 1970s, as the result of the emergence of a vociferous and well-informed local protest lobby (ably abetted in each case by superb reports in the Architectural Review). And as with Bath, the Covent Garden plan was effectively spiked by a highly unorthodox gesture by Geoffrey Rippon in 1973 (in Covent Garden's case he 'listed' 250 buildings, many of them quite undistinguished, simply in order to halt massive demolition).

But in Bath, Covent Garden and many other places in Britain today, the real legacy of the lunatic years is the problem of blight and dereliction. Just as much a monument to the holocaust of compulsory purchase and destruction of the 1960s as the eyesores which actually got built (tower blocks, urban motorways etc) are the vast areas of our cities which are today just vacant sites, or buildings left to decay to the point of no return. A recent book by Charles McKean (Fight Blight, Kaye and Ward £3.95) emphasises with the aid of graphic pictures just what an appalling disaster the planners have left in this respect, in Glasgow, Nottingham, Liverpool, London and elsewhere — and also some of the admirable but inevitably minuscule attempts which have been made by all sorts of local groups and individuals to wrest buildings out of the hands of local authorities, and to bring little corners of our murdered cities back to life. Whether in Covent Garden or Glasgow or Rotherhithe (where 1 was told an appalling story the other day of how Southwark Council is trying to bureaucratise and kill off an imaginative effort by various repittable artistic and theatrical groups to revivify a group of old buildings by the Thames) the story is everywhere the same. The planners can kill, but they cannot create life, and on

the whole they seem congenitally incapable of allowing anyone else to do so (this of course goes right to the heart of the present pathetic debate over the 'inner cities', which is pathetic precisely because the politicians and bureaucrats cannot imagine that anyone should be allowed to revivify the inner cities other than themselves — i.e. the people who killed them off in the first place.

In Bath the problem is particularly acute because so much of the city (including hundreds of listed buildings) was bought up for the abortive road plan. Now hundreds of Georgian buildings are decaying, many of them owned by the Roads Department of Avon County Council, which has no conceivable machinery for bringing them back into use. Bath City Council is reluctant to buy them, because it claims it has not got the money. To look on the bright side, there are plenty of private local attempts to restore and rehabilitate old buildings in Bath; the Bath Preservation Trust itself has embarked on an ambitious and admirable programme of buying up, restoring and selling off properties by means of a 'revolving fund'; other groups, including property companies, have worked miracles with individual buildings, such as a recently completed block in Kings Mead Square; and even the City Council itself is pursuing a 'conservation programme' far more ambitious than would have seemed possible five years ago, aided by government money. But the local conservationists still feel that too much of the money is going on 'prestige projects' like cleaning important buildings, and nothing like enough on saving buildings from decay to the point where they are lost. It is certainly true that, to an outsider, the most conspicuous problem in Bath appears to be how to wrest out of the clutches of the planners all sorts of properties at present lying useless. But then that is really the greatest problem today of cities all over Britain: and what can be done to roll back the dead hand of bureaucratic ownership when it clearly serves no useful purpose whatever, should be one of the chief preoccupations of anyone concerned for the future of our major cities at the present time.