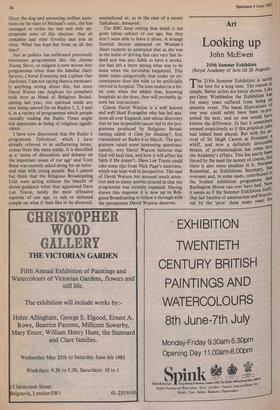 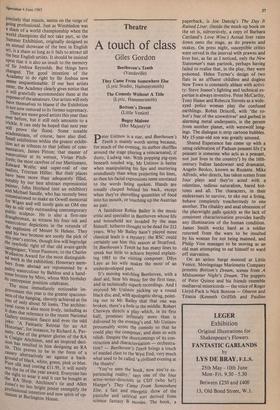 215th Summer Exhibition (Royal Academy of Arts till 28 August) I. the 215th Summer Exhibition is surely I. the best for a long time. The reason in simple. Better artists are better shown. Like pre-Open Wimbledon the Exhibition has for many years suffered from being an amateur event. The banal illustrations of one year could safely have been re-pre- sented the next, and no one would have known the difference. In fact it sometimes seemed suspiciously as if this practical joke had indeed been played. But with the ar- rival of Sir Hugh Casson as President a whiff, and now a definitely detectable breeze, of professionalism has come into the Academy's affairs. This has partly been forced by the need for money of course, but there is also some idealism in it. Normal' Rosenthal, as Exhibitions Secretary, has overseen and, in some cases, contributed to the liveliest exhibition programme that Burlington House can ever have had. Now

it seems as if the Summer Exhibition itself, boyc that last bastion of amateurism and ot-

ted by the 'pros' these many years for

precisely that reason, seems on the verge of going professional. Just as Wimbledon was a sham of a world championship when the world champions did not take part, so the Summer Exhibition, originally designed as an annual showcase of the best in English art, is a sham so long as it fails to attract all the best English artists. It should be insisted upon that it is also an insult to the memory of Sir Joshua Reynolds. But things have changed. The good intention of the Academy to do right by Sir Joshua now seems unquestionable. If our best artists enter, the Academy clearly gives notice that it will gratefully accommodate them at the expense of the amateurs. Our artists will only have themselves to blame if the Exhibition is not now restored to its former supremacy.

There are more good artists this year than ever before, but it still only amounts to a trickle. It can only be hoped that next year Will prove the flood. Some notable academicians, of course, have also died. Small exhibitions within the greater exhibi- tion act as tributes to that jolliest of com- mentators, James Fitton; that master of watercolour at its wettest, Vivian Pitch- forth; the most carefree of our Mattisseans, Edward Wolfe; and super-real of our realists, Tristram Hillier. But their places have been more than adequately filled, notably by our best abstract expressionist Painter, John Hoyland (not an exhibitor) and Michael Sandie, who has recently been commissioned to make an Orwell memorial for Wigan and will surely gain an OM one day as odr only outstanding comtemporary Public sculptor. He is also a first-rate draughtsman, as witness his four ink and watercolour depictions in the rotunda of the explosion of Mount St Helens. They and his two bronzes are surely the pick of this year's entries, though few will begrudge the symbolic right of that old avant-garde campaigner, nut- Victor Pasmore, to the Charles Wollaston Award for the most distinguish- ed work in the exhibition. Honorary mem- bers from abroad are represented by a Paltry watercolour by Balthus and a hand- some bronze by Miro, whose 90th birthday its centrepoint position celebrates. The most immediately noticeable im- provement this year is the greater spacious-

ness of the hanging, cleverly achieved at the loss of only about 50 items. The architec- tural room is also more lively, including as it does due reference to the recent National Gallery extension fiasco and even the odd J°:ke: 'A Fantastic Retreat for an Art Historian', for instance, by Richard A. Par- habY. One of the greater glories of the RA is Craigie Aitchison, and an inspired deci- sion has resulted in him designing an RA tie. This proves to be in the form of a canary alternatively set against a back- ground of black, white, green, pink or blue.

Pure silk and costing £11.95, it will surely win the tie of the year award. Everyone has the right to wear it and it can be bought at the RA Shop. Aitchison's tie and Allen Jones's no less bright poster exemplify the professional intention and new spirit of op- timism at Burlington House.