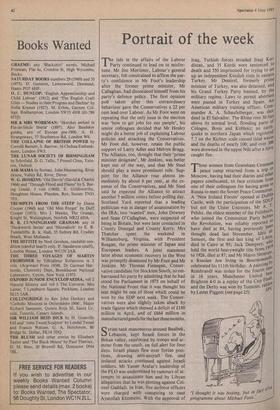 The tide in the affairs of the Labour Party continued to lead on to misfor- tune. Mr Jim Mortimer, Labour's general secretary, felt constrained to affirm the par- ty's confidence in Mr Foot's leadership after the former, prime minister, Mr Callaghan, had dissociated himself from his party's defence policy. The first opinion poll taken after this extraordinary behaviour gave the Conservatives a 22 per cent lead over Labour. As Mr Foot went on repeating that the only issue in the election was 'how to get jobs for our people', his senior colleagues decided that Mr Healey might do abetter job of explaining Labour policies and attacking the Conservatives. Mr Foot did, however, retain the public support of Larry Adler and Melvyn Bragg. The Alliance, too, thought that their 'prime minister designate', Mr Jenkins, was better kept out of the way, and that Mr Steel should play a more prominent role. Sup- port for the Alliance rose almost im- mediately by about 6 per cent, at the ex- pense of the Conservatives, and Mr Steel said he expected the Alliance to attract another 5 million voters before polling day. Scotland Yard reported that a leading politician was in danger of assassination by the IRA; two 'wanted' men, John Downey and Sean O'Callaghan, were suspected of being in Britain, but were later contacted in County Donegal and County Kerry. Mrs Thatcher spent the weekend in Williamsburg, Virginia, with President Reagan, the prime minister of Japan and European leaders. A joint statement later about economic recovery in the West was promptly dismissed by Mr Foot and Mr Jenkins. Mr Thomas Finnegan, Conser- vative candidate for Stockton South, so em- barrassed his party by admitting that he had stood for Parliament in 1975 on behalf of the National Front that it was thought his seat might be one of three which could be won by the SDP next week. The Conser- vatives were also slightly taken aback by trade figures which showed a deficit of £180 million in April, and of £664 million in manufactured goods for the last three months.

yrian tank manoeuvres around Baalbek, Lebanon, kept Israeli forces in the Bekaa valley, reinforced by troops and ar- mour from the south, on full alert for four days. Israeli planes flew over Syrian posi- tions, drawing anti-aircraft fire, and isolated attacks continued against Israeli soldiers. Mr Yasser Arafat's leadership of the PLO was undermined by rumours of at- tempts to assassinate him and by Libyan allegations that he was plotting against Col- onel Gaddafi. In Iran, five airforce officers were charged with conspiring to oust Ayatollah Khomeini. With the approval of

Iraq, Turkish forces invaded Iraqi Kur- distan, and 35 Kurds were sentenced to death and 350 imprisoned for trying to set up an independent Kurdish state in eastern Turkey. Mr Demirel, formerly prime minister of Turkey, was also detained, and his Grand Turkey Party banned, by the military regime., Laws to permit abortion were passed in Turkey and Spain. An American military training officer, Com- mander A. A. Schaufelberger, was shot dead in El Salvador. The Rhine rose 30 feet above its normal level, flooding parts of Cologne, Bonn and Koblenz; an earth- quake in northern :Japan which registered 7.7 on the Richter scale caused tidal waves and the deaths of nearly 100; and over 300 were drowned in the upper Nile after a ferry caught fire.

Three women from Cireenham Comma peace camp returned from a trip to Moscow, having had their diaries and other papers confiscated, to face criticism from one of their colleagues for having gone to Russia to meet the Soviet Peace Committee. A New Ireland Forum' opened at Dublin Castle, with the participation of the SDI but not the Ulster Unionists. Mr A. Y' Pelshe, the oldest member of the Politbur°' who joined the Communist Party before the Revolution, was reliably reported to have died at 84, having previously been thought dead last November. Idris a'" Senussi, the first and last king of Libya' died in Cairo at 93; Jack Dempsey, vi„11,°9 held the world heavyweight title from lYj to 1926, died at 87; and Mr Harris Shoerats' a Russian Jew living in Bournemouth,' celebrated his 111th birthday. A painting b/e Rembrandt was stolen for the fourth time in 16 years. Manchester United .1/ Brighton 4-0 in a replay of the Cup F°1,81.; and the Derby was won by Teenoso, tickler by Lester Piggott (see page 25).

thought it was boxing, but in fact programme about Michael Foot.'