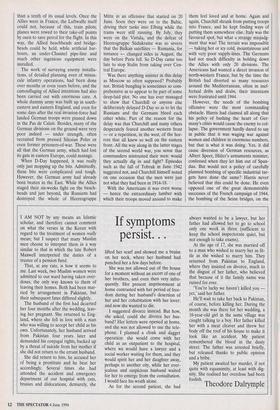 I AM NOT by any means an Islamic scholar, and therefore cannot comment on what the verses in the Koran with regard to the treatment of women really mean; but I suspect that many Muslim men choose to interpret them in a way similar to that in which the late Robert Maxwell interpreted the duties of a trustee of a pension fund.

That, at any rate, is how it seems to me. Last week, two Muslim women were admitted to our ward having taken over- doses, the only way known to them of leaving their homes. Both had been mar- ried by arrangement in Pakistan, but their subsequent fates differed slightly.

The husband of the first had deserted her four months after the wedding, leav- ing her pregnant. She returned to Eng- land, where she fell in love with a man who was willing to accept her child as his own. Unfortunately, her husband arrived from Pakistan four years later and demanded his conjugal rights, backed up by a threat of suicide from her mother if she did not return to the errant husband.

She did return to him, he accused her of being a prostitute and he beat her accordingly. Several times she had attended the accident and emergency department of our hospital with cuts, bruises and dislocations; demurely, she lifted her scarf and showed me a bruise on her neck, where her husband had punched her a few days before.

She was not allowed out of the house for a moment without an escort of one of her brothers, and even then very infre- quently. Her present imprisonment at home contrasted with her period of free- dom during her husband's desertion of her and her cohabitation with her lover: and now she wanted to die.

I suggested divorce instead. But how, she asked, could she divorce her hus- band? Her letters were opened at home, and she was not allowed to use the tele- phone. I planned a cloak and dagger operation: she would come with her child as an outpatient to the hospital, where we would have a lawyer and a social worker waiting for them, and they would spirit her and her daughter away, perhaps to another city, while her ever- jealous and suspicious husband waited for her to emerge from the consultation. I would face his wrath alone.

As for the second patient, she had always wanted to be a lawyer, but her father had allowed her to go to school only one week in three (sufficient to keep the school inspectorate quiet, but not enough to take exams).

At the age of 17, she was married off to a man who wished to marry her as lit- tle as she wished to marry him. They returned from Pakistan to England, where they insisted on divorce, much to the disgust of her father, who believed that because of it the family name was ruined for ever.

`You're lucky we haven't killed you — yet,' said her father.

He'll wait to take her back to Pakistan, of course, before killing her. During the month she was there for her wedding, a 16-year-old girl in the same village was caught talking to a boy. Her father killed her with a meat cleaver and threw her body off the roof of his house to make it look like an accident. My patient remembered the blood in the dusty street. The father was arrested briefly, but released thanks to public opinion and a bribe.

My patient awaited her murder, if not quite with equanimity, at least with dig- nity. She realised her overdose had been