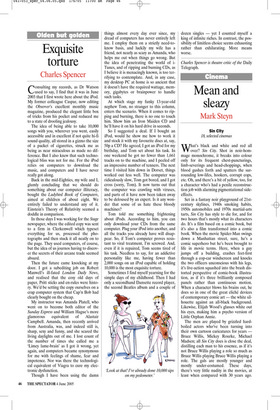 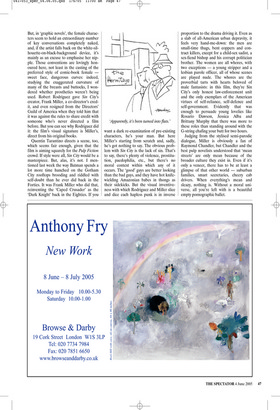 Sin City 18, selected cinemas What’s black and white and red all over? Sin City. Shot in noir-hommage monochrome, it breaks into colour only for its frequent chest-puncturings, limb-severings and head-choppings, when blood gushes forth and spatters the surrounding low-lifes, hookers, corrupt cops, etc. Oh, and there’s a bit of yellow, too, for a character who’s had a penile reconstruction job with alarming pigmentational sideeffects.

Set in a fantasy noir playground of 21stcentury skylines, 1940s smoking habits, 1950s automobiles and 1970s martial-arts tarts, Sin City has style to die for, and for two hours that’s mostly what its characters do. It’s a film based on a comic book, but it’s also a film transformed into a comic book. When the movie Spider-Man swings down a Manhattan street, sure, he’s a comic superhero but he’s been brought to life in movie terms. Here, when a guy jumps off a building, crashes feet-first through a cop-car windscreen and knocks the two officers unconscious with his legs, it’s live-action squashed into the brash distorted perspective of comic-book illustration, as if it’s three brilliantly composed panels rather than continuous motion. When a character blows his brains out, he does so in one of the great cliché devices of contemporary comic art — the white silhouette against an all-black background. Likewise, Elijah Wood’s glasses white out his eyes, making him a psycho version of Little Orphan Annie.

The men are played by grizzled hardboiled actors who’ve been turning into their own cartoon caricatures for years Bruce Willis, Mickey Rourke, Michael Madsen; all Sin City does is close the deal, distilling each man to his essence, as if it’s not Bruce Willis playing a role so much as Bruce Willis playing Bruce Willis playing a role. The gals are mostly younger and mostly under-costumed. These days, there’s very little nudity in the movies, at least when compared with 30 years ago. But, in ‘graphic novels’, the female characters seem to hold an extraordinary number of key conversations completely naked, and, if the artist falls back on the white-silhouette-on-black-background device, it’s mainly as an excuse to emphasise her nipple. Those conventions are lovingly honoured here, not least in the casting of the preferred style of comic-book female sweet face, dangerous curves: indeed, studying the exaggerated curvature of many of the breasts and buttocks, I wondered whether prosthetics weren’t being used. Robert Rodriguez gave Sin City’s creator, Frank Miller, a co-director’s credit, and even resigned from the Directors’ Guild of America when they told him that it was against the rules to share credit with someone who’s never directed a film before. But you can see why Rodriguez did it: the film’s visual signature is Miller’s, direct from his original books.

Quentin Tarantino directs a scene, too, which seems fair enough, given that the film is aiming squarely for the Pulp Fiction crowd. If style were all, Sin City would be a masterpiece. But, alas, it’s not. I mentioned last week the way Batman spends a lot more time hunched on the Gotham City rooftops brooding and riddled with self-doubt than he ever did back in the Forties. It was Frank Miller who did that, reinventing the ‘Caped Crusader’ as the ‘Dark Knight’ back in the Eighties. If you want a dark re-examination of pre-existing characters, he’s your man. But here Miller’s starting from scratch and, sadly, he’s got nothing to say. The obvious problem with Sin City is the lack of sin. That’s to say, there’s plenty of violence, prostitution, paedophilia, etc., but there’s no moral context within which any of it occurs. The ‘good’ guys are better looking than the bad guys, and they have hot knifewielding Amazonian babes in thongs as their sidekicks. But the visual inventiveness with which Rodriguez and Miller slice and dice each hapless punk is in inverse proportion to the drama driving it. Even as a slab of all-American urban depravity, it feels very hand-me-down: the men are small-time thugs, bent coppers and contract killers, except for a child-sex sadist, a sex-fiend bishop and his corrupt politician brother. The women are all whores, with two exceptions — a young stripper and a lesbian parole officer, all of whose scenes are played nude. The whores are the proverbial tarts with hearts beloved of male fantasists: in this film, they’re Sin City’s only honest law-enforcement unit and the only exemplars of the American virtues of self-reliance, self-defence and self-government. Evidently that was enough to persuade young lovelies like Rosario Dawson, Jessica Alba and Brittany Murphy that there was more to these roles than standing around with the G-string chafing your butt for two hours.

Judging from the stylised semi-parodic dialogue, Miller is obviously a fan of Raymond Chandler, but Chandler and the best pulp novelists understood that ‘mean streets’ are only mean because of the broader culture they exist in. Even if it’s only a veneer, there has to be at least a glimpse of that other world — suburban families, smart secretaries, cheery cab drivers. When everything’s mean and sleazy, nothing is. Without a moral universe, all you’re left with is a beautiful empty pornographic ballet.