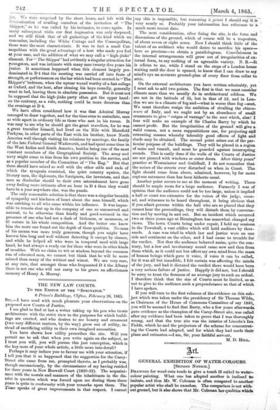 To THE EDITOR OF THE "SPECTATOR."

• 8 .Prince's Buildings, Clifton, February 26, 1865. Snt,—I have read with much pleasure your observations on the proposed new Courts of Justice.

I am glad to find at last a writer taking up his pen who treats architecture with the strict view to the purposes for which build- ings are erected, and who desires to see beauty and ornament (two very different matters, by the way) grow out of utility, in- stead of sacrificing utility to their own imagined necessities.

You have shown how utility prescribes the site. Will you permit me to ask that when you write again on the subject, as I trust you will, you will pursue this just conception, which is the key-note of your whole article, a little more into detail?

Perhaps it may induce you to favour me with your attention, if I tell you that it so happened that the suggestion for the Carey- Street site came from me, prompted thereto, as I probably was, though unconsciously, by the circumstance of my having resided for three years in New Boswell Court (1820-22). The acquaint- &nee with the morals and manners of the inhabitants in the dis- trict in question which was forced upon me during those three years is quite in conformity with your remarks upon them. The Times speaks of great improvements in that respect. I cannot say this is impossible, but reasoning a priori I should inifit it; very nearly so. Probably your information haii reference to a much more recent date.

The next consideration, after fixing the site, is the form and . dimensions of the ground, which of course will be a trapezium, of about seven or eight acres. Now I should think little of the talent of an architect who would desire to sacrifice his space— here so precious—to obtain a parallelogram. Conveniences in the internal arrangements will grow out of irregularities of ex- ternal form, to say nothing of an agreeable variety. N. B.—It - is odious to me, while I stand on the steps of a London house waiting until the door is opened, to know that I can. draw to my mind's eye an accurate ground-plan of every floor from. cellar to attic.

On the external architecture you have written admirably, yet I must as to add two points. The first is that we must consider climate more than we usually do in architectural edifices. We are not in the latitude of 35, but in that of 52, and in Lon- don we are in a climate of fog and—what is worse than fog--soot. We must therefore resign the ambition of rivalling the chiaro- scuro of Italy, and we ought not by an abundance of small ornaments to give "coigns of vantage" to the soot which, alas ! I fear will make an example of Sir Charles Barry by which he cannot profit. But the irregularities of the ground will give a valid reason, not a mere supposititious one, for projecting and retreating masses whereby tolerably good effects of light and shade may be obtained. The second point arises out of the par- ticular purpose of the buildings. They will be placed in a region of noise and tumult, and must be guarded against interrupting sounds. This is easily done if the walls of the Courts of Justice are not pierced with windows or outer doors. After thirty years' practice at Westminster and Guildhall, I do not remember that the noises of the streets ever disturbed us when in Court. The. light should come from above, admitted, however, by far more copious entrances than has been hitherto usual.

Another point occurs to me at the moment of writing. There should be ample room for a barge audience. Formerly I was of opinion that the audience could not be too large, unless it implied a hall or court too extensive for the voices of the judge, coun- sel, and witnesses to be heard throughout, it being obvious that. if you admit persons within the hall who are BO placed that they cannot hear the proceedings, they will disturb them by conversa- tion and by moving in and out. But an incident which occurred two or three years ago at Birmingham has somewhat changed my views. The town Courts being under repair, I held my sessions_ in the Townhall, a vast edifice which will hold auditors by thou- sands. A case was tried in which law and justice were on one side and sentiment on the other, and I had cause to tremble for the verdict. Not that the audience behaved amiss, quite the con- trary, but a low and involuntary sound came now and then from them which, as it could not but affect my own mind from the mass. of human beings which gave it voice, if voice it can be called, for it was all but inaudible, I felt certain was affecting the minds. of the jury, and had it dictated the verdict there would have been a very serious failure of justice. Happily it did not, but I should be sorry to trust the firmness of an average jury to such an ordeal. I therefore think that the size of Courts must be limited, so as. not to give to the audience such a preponderance as that of which I have spoken.

If you will turn to the first volumes of the evidence on this sub- ject which was taken under the presidency of Sir Thomas Wilde,. as Chairman of the House of Commons Committee of say 1840,, you will be amused to find that Barry, who a few years afterwards. gave evidence as the champion of the Carey-Street site, was called after my evidence had been taken to prove that I was thoroughly wrong, and that the true site was the interior of Lincoln's Inn Fields, which he and the projectors of the scheme for concentrat- ing the Courts had adopted, and for which they had made their plans and estimates.—! am, Sir, your faithful servant,