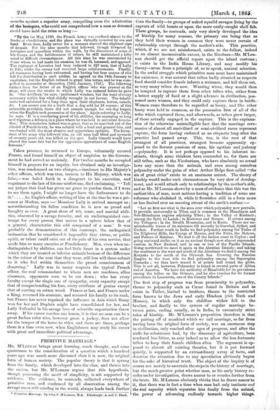 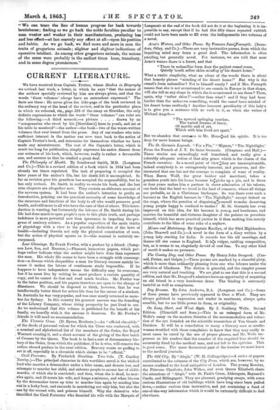 MR. MMENNAN brings great learning, much thought, and some quaintness to the consideration of a question which a hundred years ago was much more discussed than it is now, the original form of human society. The popular theory is that it sprang from the family, which developed into the clan, and thence into the nation, but Mr. M'Lennan argues that this hypothesis, though possessing the merit of simplicity, is not supported by evidence. The evidence, he contends, collected everywhere of primitive man, and confirmed by all observation among the savage races still existing in the world, always leads back further * Primitire Marriage. Ay John F. M'Lennan, M.A. Edinburgh: A. and C. Black. than the family—to groups of naked squalid savages living by the capture of wild beasts or upon the more easily-caught shell fish. These groups, he contends, only very slowly developed the idea of kinship for many reasons, the primary one being that as they held their women in common they were never certain of relationship except through the mother's side. This practice, which, if we are not misinformed, exists to the fullest, indeed to an almost inconceivable extent, in the Nicobars—Mr. M'Len- nan should get the official report upon the island customs ; it exists in the India House Library, and may modify his theory—arose from a principle of, so to speak, natural selection. In the awful straggle which primitive man must have maintained for existence, it was natural that tribes badly situated as respects food should consider female infants a nuisance, and kill them out, as very many tribes do now. Wanting wives, they would then be tempted to capture them from other tribes who, either from a better supply of food or a slight advance in civilization, pos- sessed more women, and they could only capture them in battle. - Women came therefore to be regarded as booty, and like other booty were held in common, as the possession first of all of the tribe which captured them, and afterwards, as tribes grew larger, of those actually engaged in the capture. This is the explana- tion of the otherwise unintelligible fact that the marriage cere- monies of almost all uncivilized or semi-civilized races represent capture, the form having endured as an etiquette long after the practice had passed away. This, too, is the root of that strangest of all practices, strangest because apparently op- posed to the fiercest passions of man, his egotism and jealousy —polyandry. It is not perhaps opposed to his inherent in- stincts, though some thinkers have contended so, for there are still tribes, such as the Nicobarians, who have absolutely no sexual laws any more than the animals, and even among ourselves polyandry under the guise of what Arthur Helps first called "the sin of great cities" exists to an enormous extent. The theory of kinship :would under such circumstances be very slow of develop- ment, and would attach only to relationships by the mother's side, and so Mr. M'Lennan shows by a mass of evidence that this was the earliest idea of man, most nations having a tradition of some one reformer who abolished it, while it flourishes still in a form more or less limited over an amazing extent of the earth's surface :— " Let us first see what is the area over which polyandry now prevails. It prevails universally in Tibet, and is common in the Himalayan and Sub-Himalayan regions adjoining Tibet ; in the Valley of Kashmir ; among the Spiti, in Ladak ; in Kistewar and Sirmor. It occurs among the Telingese ; in the Sivalik Mountains, and in Kasia. There are =- mistakeable traces of its existence till recently in Gnrwhal, Sylhet, and Culler. Farther south in India we find polyandry among the Maas of the Nilgherry Hills, the Coorgs of Mysore, and the Naira, the Maleres, and Poleres of Malabar. We find it off the Indian coast in Ceylon ; and going eastward strike on it as an ancient though now almost superseded custom in New Zealand, and in one or two of the Pacific Islands. Going northward we meet it again in the Aleutian Islands ; and taking the continent to the west and north of the _Aleutians we find it among the Koryaks to the north of the Okhotsk Sea. Crossing the Russian Empire to the west side we find polyandry among the Saporogian Cossacks ; we thus have traced it at points half round the globe. This is not all, however, Polyandry is found in several parts of Africa and of America. We have the authority of Humboldt for its prevalence among the tribes on the Orinoco, and he also vouches for its former prevalence in Lancerota, one of the Canary Islands."

The first step of progress was from promiscuity to polyandry, thence to polyandry such as Cmsar found in Britain and as exists in Thibet, limited to brothers, thence to the restricted form known to the Jews and early Hindoos (vide Ruth and' Munoo), in which only the childless widow fell to the brother, and finally to the system of regular marriage be- tween pairs, ending usually, as in India, in excessively strict rules of kinship. Mr. M'Lennan's proposition therefore is that the pairing off of mankind which we call marriage, so far from having been the original form of society, was an enormous step- in civilization, only reached after ages of progress, and after the strife for subsistence had, by the discovery of agriculture, been rendered less bitter, BO easy indeed as to allow the less fortunate tribes to keep their female children alive. The argument is op- posed to almost all existing theories, but it is put forward quietly, is supported by an extraordinary array of facts, and deserves the attention due to any speculation obviously began for the sake of historical truth. The object of the inquiry is of course not merely to ascertain the steps in the history of marriage, but the much greater point whether man, as his early history re- cedes under investigation, draws nearer to or recedes farther from the brute. Mr. M'Lennan obviously thinks that he draws nearer to it, that there was in fact a time when man had only instincts and the real capacity which separates him finally from the animal, the power of advancing endlessly towards higher things.

"We can trace the line of human progress far back towards brutishness ; finding as we go back the noble faculties peculiar to man weaker and weaker in their manifestations, producing less and less effect—at last scarcely any effect at all—upon his position and habits. As we go back, we find more and more in men the traits of gregarious animals ; slighter and slighter indications of operative intellect. As among other gregarious animals, the unions of the sexes were probably in the earliest times loose, transitory, and in some degree promiscuous."