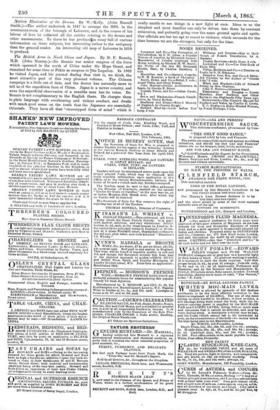 The British Arms in North China and Japan. By D.

F. Rennie, M.D. (John Murray.)-Dr. Rennie was senior surgeon of the force which operated in the north of China under Sir Hope Grant, and remained for some time at Pekin as surgeon to the Legation. In 1862 he visited Japan, and his journal during that visit is, we think, the most attractive part of this very pleasant volume. The Chinese campaign is a little out of date, and the doctor has naturally more to tell us of the expedition than of China. Japan is a newer country, and even the superficial observation of a sensible man has its value. Dr. Rennie is not complimentary to the English there. He charges them in plain language with overbearing and violent conduct, and dwells with much good sense on the truth that the Japanese are essentially Orientals. They have all that "stereotyped form of mind" which is really unable to see things in a new light at once. Ideas to us the' simplest and most familiar can only be driven into them by constant reiteration, and patiently going over the same ground again and again. Our officials are but too apt to resort to violence, which succeeds for the time because we are the strongest, but only for the time.