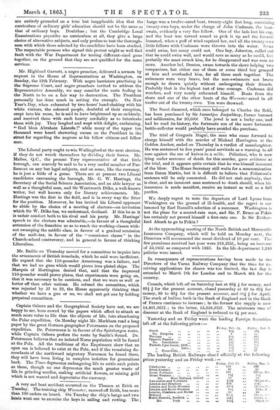 Page 3, 4 March 1865 — The Liberal party ought to win Wallingford at the next
Close

The Liberal party ought to win Wallingford at the next

election, if they do not wreck themselves by dividing their forces. Mr. Melina, Q.C., the present Tory representative of that little -borough, can scarcely be said to be a very useful member of Par- liament on any but legal subjects, and on some, like the currency, he is just a little of a goose. There are at present two Liberal candidates canvassing the borough, Mr. G. W. Hastings, the Secretary of the Social Science Association, and an able lawyer as well as a thoughtful man, and Sir Wentworth Dilke, a well-known writer, but well known only for literary achievements. Mr. Hastings was the first in the field, and is in every way the fitter for the position. Moreover, he has invited his Liberal opponent to abide by the choice of a meeting of electors—an invitation which Sir W. Dilke has, we understand, declined. If this be so it is unfair conduct both to his rival and his party. Mr. Hastings' speech to the electors was admirable,—in favour of a thoughtful 'extension of the franchise so as to reach the working-classes with- out swamping the middle class, in favour of a gradual remission of the malt-tax, in favour of the "conscience clause" in the Church-school controversy, and in general in favour of thinking Liberalism.