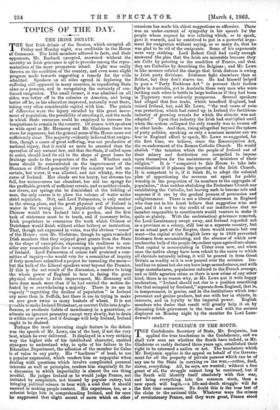 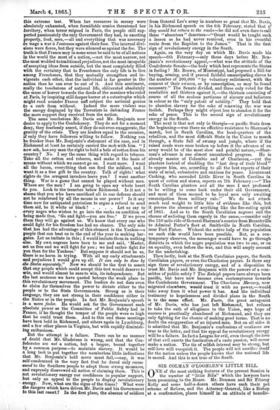 SALUT PUBLIQUE IN THE SOUTH.

this extreme test. When her resources in money were absolutely exhausted, when formidable armies threatened her territory, when terror reigned in Paris, the people still sup- ported passionately the only Government they had, in exacting property, food, men,—all and everything that was necessary to wage a war a outrance against their foes. The internal divi- eions were fierce, but they were silenced as against the foe. The truth is that France may in some sense be said to be of all nations in the world the most of a nation,—not the most narrow, not the most wedded to traditional prejudices, not the most incapable of accepting ideas from outside, but the most completely filled with the certainty that to Frenchmen the only life is to live among Frenchmen, that they mutually strengthen and in- vigorate each other, that the individual is fur greater in the nation than he can ever be out of it. And this sentiment, really the touchstone of national life, obliterated absolutely the sense of horror towards the deeds of the maniacs who ruled at Paris, by inspiring still deeper horror at a catastrophe which might rend asunder France an subject the national genius to a curb from without. Indeed the more violent was tbe energy displayed by the Terrorists in defending France the more support they received from the nation.

The same touchstone Mr. Davis and Mr. Benjamin now desire to apply to the Confederacy. They do not for a moment deny, they fearlessly assert, if they do not even exaggerate, the gravity of the crisis. They are leaders equal to the occasion, if only they have followers willing to follow. Nothing can be franker than Mr. Benjamin's statement of the case, and in Richmond at least he certainly carried the mob with him. "I now ask, has any man the right to hold a bale of cotton from his country? No. I say the same thing with regard to tobacco. Take all the cotton and tobacco, and make it the basis of means without which we cannot go on. I want more. I want all the bacon, everything that can feed the soldiers, and I want it as a free gift to the country. Talk of rights ! what sights do the arrogant invaders leave you ? I want another thing. War is a game that cannot be played without men. Where are the men ? I am going to open my whole heart to you. Look to the trenches below Richmond. Is it not a ohame that you who have sacrificed all in our defence should not be reinforced by all the means in our power ? Is it any time now for antiquated patriotism to argue a refusal to send them aid, be it white or black Let us say to every negro who wishes to go into the ranks on condition of

. being made free, Go and fight—you are free.' If we press them they will go against us. We know that every one who could fight for his freedom has had no chance. The only side that has had the advantage of this element is the Yankee—a people that can beat us to the end of the year in making bar- gains. Let us imitate in this ; I would imitate them in nothing *Ise. My own negroes have been to me and said, Master, set us free and we will fight for you ; we had rather fight for you than for the Yankees. But suppose it should not be so, there is no harm in trying. With all my early attachments and prejudices I would give up all. It can only be done by the States separately." Now we should be the first to assert that any people which could accept this test would deserve to win, and would almost be sure to win, its independence. But the last sentence we have quoted betrays the weak place in this revolutionary movement. The leaders do not dare even to claim for themselves the power to dictate either to the people or to the State Governments. Strong as is their language, they are not strong in their confidence either in the States or in the people. In fact Mr. Benjamin's speech is a mere feeler. He would ask for the Government such absolute power as the Committee of Public Safety had in France, if he thought the temper of the people were so high that he could trust them. And to this end these meetings have been held in Richmond, and others again in Lynchburg, and a few other places in Virginia, but with rapidly diminish- ing enthusiasm.

But the attempt is a failure. There can be no manner of doubt that Mr. Gladstone is wrong, and that the Con- federates are not a nation, but a league, bound together by a common purpose—to maintain slavery. It would be a long task to put together the numberless little indications that Mr. Benjamin's bold move must fail,—nay, it was self-condemned in the very fact that he dared only recom- mend to the Southern people to adopt these strong measures, and expressly disavowed all notion of claiming them. This is not revolutionary energy nor confidence in popular support, but only an appeal to the people to display revolutionary - energy. Now, what are the signs of the times ? What were the dangers which have driven Mr. Davis and his Government to this last resort? In the first place, the absence of soldiers

from General Lee's army in numbers so great that Mr. Davis, in his Richmond speech on the 6th February, stated that if they would but return to the ranks—he did not even dare to call these " absentees " deserters—" Grant would be taught such a lesson as he had never received, even in his eventful route from the Rapidan to the James." That is the first sign of revolutionary energy in the South.

Again, on the very day on which Mr. Davis made his speech-6th February—only three days before Mr. Ben- jamin's revolutionary appeal,--what was the attitude of the Confederate Senate—the body which best represents the States in feeling ? Mr. Brown, of Mississippi, had proposed a Bill for buying, arming, and if proved faithful emancipating slaves to the number of 200,000 "by voluntary enlistment, with the consent of their owners, or by conscription, as may be found necessary." The Senate divided, and three only voted for the resolution and thirteen against it,—the thirteen consisting of course of all the zealous partizans of slavery and believers in colour as the "only patent of nobility." They held that to abandon slavery for the sake of renewing the war was foolish. Perhaps they might object less to abandon it for the sake of peace. This is the second sign of revolutionary energy in the South. The next is that not only in Georgia—a pacific State from the beginning—was there no effective resistance to Sherman's march, but in South Carolina, the head-quarters of the rebellion, and the most diffichlt State in the Union to march through, a State full of swamp and jungle, where if the raised roads were once broken up before it the advance of an army would be of the most slow and painful nature,—Sher- man's advance is one almost uncontested progress. He is already master of Columbia and of Charleston,—yet the planters instead of shedding the "last drop of their blood" to oppose him, are, according to all the best reports of their state of mind, submissive and anxious for peace. Lieutenant Cushing, who ascended Little River in South Carolina in quest of cotton and stores, reports on 7th February :—" The South Carolina planters and all the men I met professed to be willing to come back under their old Government, and most of them seemed to be loyal men only awaiting emancipation from military rule." We do not attach much real weight to little bits of evidence like this, but it proves the absence of anything like the fire-eating spirit of 1861. And as to the South Carolinian negroe3 and the chance of enlisting them eagerly in the cause,—consider only the 150 mile ride of General Sherman's courier from Branchville to Admiral Porter's fleet at Smithville in North Carolina, near Fort Fisher. Without the active help of the population no such ride would have been possible. But, as a con- temporary observes, the messenger would have to go through districts in which the negro population was two to one, or on an equality, even before the war, and this will amply account for the undertaking.

Then lastly, look at the North Carolinian papers, the South Carolinian papers, or even the Charleston papers. Is there any sign there of revolutionary energy, and of a disposition to trust Mr. Davis and Mr. Benjamin with the powers of a com- mittee of public safety ? The Raleigh papers have always been pacific, but have now become even contemptuous towards the Confederate Government. The Charleston Mercury, now migrated elsewhere, would trust it with no power,—would take away from it what power it has. And the individual testimony to hopelessness and divided plans in the South is to the same effect. Mr. Foote the great antagonist of Mr. Davis, who has just left Foote, but refuses to take the oath of allegiance to the Union, says hope of success is practically abandoned at Richmond, and they are only fighting for the chance of making good terms. That is no doubt the exaggeration of an injured man. But on all sides it is admitted that Mr. Benjamin's confessions of weakness are true to the letter, and that his appeal for revolutionary energy will ben failure. In fact a League for evil, even though the love of that evil exerts the fascination of a caste passion, will never make a nation. The tie of selfish interest may be strong, but self-love will vanquish it. The people will not sacrifice itself for the nation unless the people knows that the national life is sacred. And this is not true of the South.