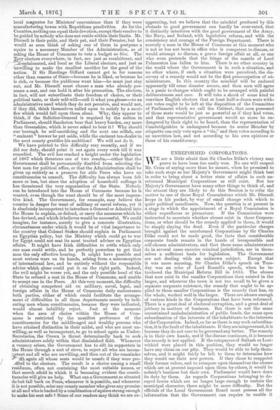 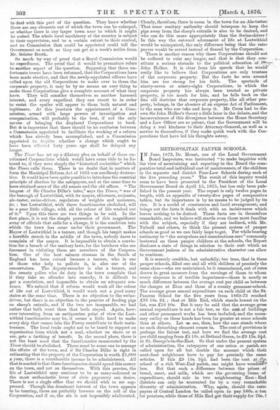 WE are a little afraid that Sir Charles Dilke's victory may prove to have been too easily won. No one will suspect Mr. Cross of saying more than he meant, when he promised to take such steps as her Majesty's Government might think best in order to bring about a better state of affairs in such un- reformed Municipal Corporations as still exist. But her Majesty's Government have many other things to think of, and the utmost they are likely to do this Session is to refer the matter to one of those Royal Commissions which Mr. Disraeli keeps in his pocket, by way of small change with which to quiet political mendicants. Now, the question is at present in a stage in which the appointment of a Royal Commission is either superfluous or premature. If the Commission were instructed to ascertain whether abuses exist in these Corpora- tions, or what should be the remedy applied to them, it would be simply slaying the dead. Even if the particular charges brought against the unreformed Corporations by Sir Charles Dilke could not be made good, the facts that considerable corporate funds remain in the hands of irresponsible and self-chosen administrators, and that these same administrators do in several cases exercise criminal jurisdiction, are in them- selves a sufficient basis for legislation. The Government are not dealing with an unknown subject. Except that it was more amusing, Sir Charles Dilke's speech on Tues- day was an echo of Lord Russell's speech, when he in- troduced the Municipal Reform Bill in 1835. The abuses that now exist in the smaller Corporations then existed in the larger, and wherever the town is not too small to be given a separate corporate existence, the remedy that ought to be ap- plied to these smaller Corporations is the remedy that has, on the whole, worked well in the larger. There are abuses enough of various kinds in the Corporations that have been reformed. There is a great deal of electoral corruption, and a great deal of jobbery in matters of business. But there is not the same unrestrained maladministration of public funds, the same open subordination of the interests of the inhabitants to the interests of the Corporation. Indeed, so far as there is any such subordina- tion, it is the fault of the inhabitants. If they are misgoverned, it is because they do not care to be governed any better. The remedy is in their own hands, and if the disease continues, it is because the remedy is not applied. If the ratepayers of Saltash or Lost- withiel were placed in this position, they would no longer have any claim on our pity. They would be able to help them- selves, and it might fairly be left to them to determine how they would use their new powers. If they chose to reappoint their former rulers, and to reimpose upon themselves the abuses which are at present impOsed upon them by others, it would be nobody's business but their own. Parliament would have done its duty by them. As regards Corporations belonging to de- cayed towns which are no longer large enough to sustain the municipal character, there might be more difficulty. But the officials of the Local Government Board must possess all the information that the Government can require to enable it to deal with this part of the question. They know whether there are any elements out of which the town can be enlarged. or whether there is any larger town near to which it might be united. The whole local machinery of the country is subject to their supervision, and to a certain extent to their control, and no Commission that could be appointed could tell the Government so much as they can get at a week's notice from Mr. &later Booth.

So much by way of proof that a Royal Commission would be superfluous. The proof that it would be premature refers to another aspect of the question. Supposing that these un- fortunate towns have been reformed, that the Corporations have been made elective, and that the newly-appointed officers have called upon the old Corporations to make over to them the corporate property, it may be by no means an easy thing to make these Corporations give a complete account of what they have. They will consider themselves as another harassed interest, and every expedient they can resort to in order to resist the spoiler will appear to them both natural and legitimate. At this juncture the appointment of a Com- mission, armed with large powers of investigation and reorganisation, will probably be the best, if not the only means of bringing the displaced Corporations to book. Brit it itp important that there should be no confusion between a Commission appointed to facilitate the working of a reform which has already been accomplished, and a Commission appointed to inquire whether a change which ought to have been effected forty years ago shall be delayed any longer.

The Times has set up a dilatory plea on behalf of these un- reformed Corporations which would have some title to be lis- tened to, if they were simply the "historical curiosities" which the Times calls them. There is no doubt that in matters of form the Municipal Reform Act of 1835 was needlessly destruc- tive. It would have been quite possible to introduce the essential principle of election by the ratepayers, and at the same time to have retained more of the old names and the old offices. " The longest of Sir Charles Dilke's tales," says the Times, " was of the borough of Lostwithiel, with its mayor, aldermen, serjeants, ale-taster, swine-driver, regulators of weights and measures, &c. ; but Loetwithiel, with these functionaries abolished, will be a poor little village, with all the colour of life washed out of it." Upon this there are two things to be said. In the first place, it is not the simple possession of this magnificent array of officials that calls for a change, it is the condition into which the town has come under their government. The Mayor of Lostwithiel is a tanner, and though his tanpit makes a horrible stench in the middle of the town, nobody dares to complain of the mayor. It is impossible to obtain a convic- tion for a breach of the sanitary laws, for the butchers who are foremost in violating them are members of the Corpora- tion. One of the best salmon streams in the South of England has been ruined because a tanner, who is one of those who help to pollute it, is also one of the conservators. The deputy-recorder is also a tanner, and the county police who do duty in the town complain that if they take an offender into custody, it is difficult to get a conviction, and impossible to obtain an adequate sen- tence. We submit that if reform would wash all the colour of life out of Lostwithiel, it would wash out a good many stains at the same time. There is no objection to the swine- driver, but there is an objection to the practice of feeding pigs on sheep's entrails, and if the two are inseparable, we had rather that both went than that both stayed. Again, how- ever interesting from an antiquarian point of view the Lost- withiel functionaries may be, it seems a little hard to make every ship that comes into the Fowey contribute to their main- tenance. The local trade ought not to be taxed to support an organisation from which not a soul, whether on shore or at sea, gets a farthing of benefit. In the second place, there is not the least need that the functionaries enumerated by the Times •should be abolished. There must be some one to manage the affairs of the town, and if Sir Charles Dilke is right in estimating that the property of the Corporation is worth £1,000 a year, there is a considerable income to be administered. All that is needed is that these functionaries should spend this money on the town, and not on themselves. With this proviso, the life of Lostwithiel may continue to be as many-coloured as the most enthusiastic lover of civic pageantry can desire. There is not a single office that we should wish to see sup- pressed. Though the dominant interest of the town appears to be tanning, there are probably brewers on the roll of the Corporation, and if so, the ale is not impossibly adulterated.

Clearly, therefore, there is room in the town for an. Ale-taster. That some sanitary authority should interpose to keep the pigs away from the sheep's entrails is also to be desired, and who can do this more appropriately than the Swine-driver ? In this way the outward adornment of life at. Lostwithiel would be unimpaired, the only difference being that the rate- payers would be served instead of fleeced by the Corporation.

There is another reason why these Corporations should not be suffered to exist any longer, and that is that they con- stitute a serious obstacle to the political education of P.,- John Holker. It is clear from his speech that he would' really like to believe that Corporations are only trustees of the corporate property. But the facts he sees around him are too strong for his faith. The spectacle of ninety-seven or ninety-eight Corporations, in which the corporate property has always been treated as private property, is too much for him, and he falls back on the fine old doctrine that corporate property, like all other pro- perty, belongs, in the absence of an express Act of Parliament, to the man who can take and keep it. Mr. Cross had to dis- own Sir John Holker's theory a little later in the debate, and the inconveniences of this divergence between the Home Secretary and a Law Officer are so patent, that the Government will be doing a real kindness to their Attorney-General, as well as a service to themselves, if they make quick work with the Cor- porations that have led his thoughts astray.