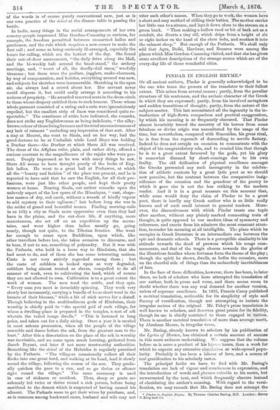 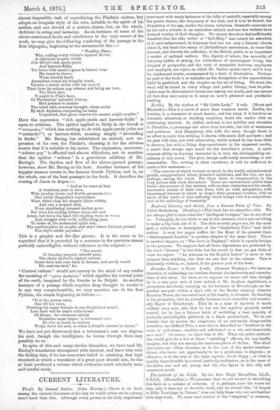 OF all ancient authors, Pindar is generally acknowledged to be the one who taxes the powers of the translator to their fullest extent. This arises from several causes ; partly, from the peculiar structure of his sentences, and the archaic character of the Greek in which they are expressed; partly, from his involved metaphors and sudden transitions of thought; partly,.from the nature of the subject-matter. This last necessitated all the ingenuity in the in- troduction of high-flown comparison and poetical exaggeration, by which his meaning is so frequently obscured. That Pindar almost invariably traced the ancestry of his heroes from some fabulous or divine origin was necessitated by the usage of the time, but nevertheless, compared with Simonides, his great rival, he is free from the reproach of descending to servile flattery. Indeed he does not scruple on occasion to remonstrate with the object of his congratulatory ode, and to remind him that though he is to a great extent favoured_ by the gods, yet his glory is somewhat dimmed by short-comings due to his own frailty. The old deification of physical excellence amongst the Greeks prevented any such incongruity in the celebra- tion of athletic contests by a great lyric poet as we should now perceive, but the contrast between the comparative insig- nificance of the occasion and the grandeur of the poetry to which it gave rise is not the less striking to the modern reader. And it is in a great measure on this account that, while none would deny the claim of Pindar to be a great poet, there is hardly any Greek author who is so little really known and of such small interest to general readers. More- over, the discursiveness with which Pinder treats one topic- after another, without any plainly marked connecting train of thought, is quite opposed to our modern ideas of symmetry and coherence, and exacts from his admirers the most constant atten- tion, to render his meaning at all intelligible. The place which he occupies in Greek literature is an intermediate one between the epic and dramatic schools. There is a perceptible similarity in hia attitude towards the deed of prowess which his songs com- memorate, and that of the tragic chorus towards the glories of the illustrious families whose fortunes form the theme of the play ; though the spirit he shows, dwells, as befits the occasion, more on the cheerful side of things than the melancholy inevitableness of fate.

In the face of these difficulties, however, there has been, in later times, no lack of scholars who have attempted the translation of our author, both in prose and verse, and there seems room to doubt whether there was any real demand for another version, unless of supreme excellence. In 1835, Francis Carey published a metrical translation, noticeable for its simplicity of style and fluency of versification, though not attempting to imitate the irregular metres of the original. Mr. Paley's prose translation is well known to scholars, and deserves great praise for its fidelity, though its use is chiefly restricted to those engaged in tuition. There is another metrical translation of more than average merit, by Abraham Moore, in irregular verse.

Mr. Boxing, already known to scholars by his publication of the Lyrics of Horace, has obtained a certain amount of success in this more arduous undertaking. We suppose that the volume before us is more a product of his le;swe hours, than a work for which he expects any extensive circulation or wide-spread popu- larity. Probably it has been a labour of love, and a source of real gratification to his scholarly tastes.

The principal faults we have to find with Mr. Baring's translation are lack of vigour and conciseness in expression, and the introduction of words and phrases suitable to his metre, but unwarranted by the text, and which frequently obscure instead of elucidating the author's meaning. With regard to the versi- fication, we may remark that Mr. Baring does not attempt the

* Penclar in English Rhyme. By Thomas Charles Baring, 1LP. London: Henry S. King and Co. almost impossible. task of reproducing the Pindaric metres, but adopts an irregular style of his own, suitable to the spirit of his author, and not devoid of a certain charm, but, on the whole, deficient in swing and harmony. As an instance of some of the above-mentioned faults and excellences in the very outset of the work, we may give the following rendering of the passage in the first Olympian, beginning at the seventeenth line :- " Wealthy Mere,

Who, culling every virtue's topmost flower, A righteous sceptre wields O'er Sicily's rich apple-yards And harvest-fields, Yet loves with music's gems in leisure hour His heart to cheer; When tuneful bards Assembled round his friendly board, Upraise a merry strain with one accord.

Then from its solemn peg release, and bring me here,

The Doric lyre, If aught in Pisa's fame, Or Pherenicns' splendid victory, Had potence to inspire The mind with sweetest thought, when easily By dark Alpheius conquering he came Unspurred, that great renown his master might acquire."

Here the expression " rich apple-yards and harvest-fields " is open to criticism. The epithet applied to Sicily in the Greek is " 7ravihiptv," which has nothing to do with apple-yards (why not " orchards?") or harvest-fields, meaning simply " abounding in flocks." Mr. Baring has substituted an entirely new ex- pression of his own for Pindar's, choosing it for the obvious reason that it is suitable to his metre. The expression, moreover, "solemn peg" is affected and almost ridiculous, not to mention that the epithet " solemn " is a gratuitous addition of Mr. Baring's. The rhythm and flow of the above-quoted passage, however, show Mr. Baring at his best. Another instance of his happier manner occurs in the famous fourth Pythian, and is, on the whole, one of the best passages in the book. It describes the coming of Jason to Argos And so he came. at last,

A wondrous man to view,

With javelins twain and double garments too :

One which Magnetites countrymen Wear, fitted close his shapely limbs within, And one, a leopard skin, From shuddering tempest shelter gave: Nor were his curling tresses shorn nor cast Away, but down his back fell rippling wave on wave.

And straight with swift, unflinching pace, To make of his undaunted spirit test, The market-place he sought, and stood where thickest pressed The city's rabble populace."

This is a graphic and life-like picture. It is the more to be regretted that it is preceded by a sentence in the previous stanza perfectly unintelligible without reference to the original:— "The oracle Of freezing purport, uttered next,

Came back and ever back in dreams, and sorely vexed

"Central radiant" would not convey to the mind of any reader the meaning of "'Aim 4400%4," which signifies the central point of the earth, imagined by the Greeks to be Delphi. As another instance of a passage which requires deep thought to render it in any way comprehensible, we may mention one in the first Pythian, the stanza beginning as follows :— " If at the season meet,

One lift his voice, Twisting his many threads to one diminished strand, Less hard will be man's critic-brand Of blame; for evermore satiety Tarnishes eager hopes: a townsman's ears Do n'er so much in secrecy Weigh down his soul, as when a friend's success ho hears."

We have not yet discovered that a townsman's ears can depress his soul, though the intelligence he learns through them may possibly do so.

In spite of this and many similar blemishes, we have read Mr. Baring's translation throughout with interest, and leave him with the feeling that, if he has somewhat failed in attaining that high standard at which a translator of a great poet should aim, he has at least produced a volume which evidences much scholarly taste and careful study.